Will this be Melbourne Victory captain Ola Toivonen's last season in the A-League ahead of a return to Sweden?

Or could he be headed to next season's expansion club Macarthur?

It is believed the western Sydney newcomers have notified Victory that the Swedish international is an off contract player who they would be keen on talking to.

But it is also understood that no formal approach has been made to Toivonen.

Macarthur chairman Rabieh Krayem was coy when quizzed about any possible move for Victory's marquee man and top scorer. 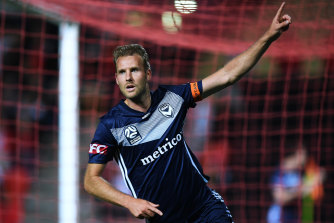 Where will Ola Toivonen be next season?Credit:Getty Images

''We will be talking to any player of quality that is out of contract. Like all clubs we are looking at high-quality players who we might want to talk to,'' he said.

The tall striker, one of the competition's stand-out talents, is weighing up a number of options for his short-term future.

He is undecided whether he will stay in Australia or return to his native Sweden next year for a combination of family and professional reasons.

The 33-year-old told a Swedish newspaper earlier this week that he  was conscious of the fact that he had growing children and that he had been playing away from his homeland for more than a decade.

“I got a question and I was honest,” said Toivonen.

“It’s been a little bit in the back of my head, what I’m going to do next, but, for the moment, I’m just focused on winning games for Victory.

“I’ve been out for a few years – I think it’s 11 right now that I haven’t been home in Sweden. If I’m going to take the opportunity to see what the Swedish competition is about again, it’s time to do it in the summer.

“But, as I said, I don’t know what’s going to happen after this season. For the moment I’m not focused on anything else than just winning games for Victory.

“There's been no decision, no talks.

“I've seen a lot of the world and the kids are getting old,'' he added.

Toivonen joined Victory after the last World Cup in Russia, when he scored for Sweden in their game against World champions Germany in the group stage of the tournament.

He had previously played in the Netherlands and France.

Toivonen has been one of the few good things about Victory this season, but he is hopeful that the return of Robbie Kruse and Andrew Nabbout to full fitness can beef up the team's attacking threat.

''We have a really good mixture of different types of players and we can create dangerous situations out of nothing,'' he said ahead of the derby against Western United on Sunday.

Victory lost the first encounter between the two in round four, and are itching for revenge.

“I think the lesson we got was that we were 2-0 up and we became very comfortable. I think it was just sloppy of us … if we kept going that game would have ended in a different result.”