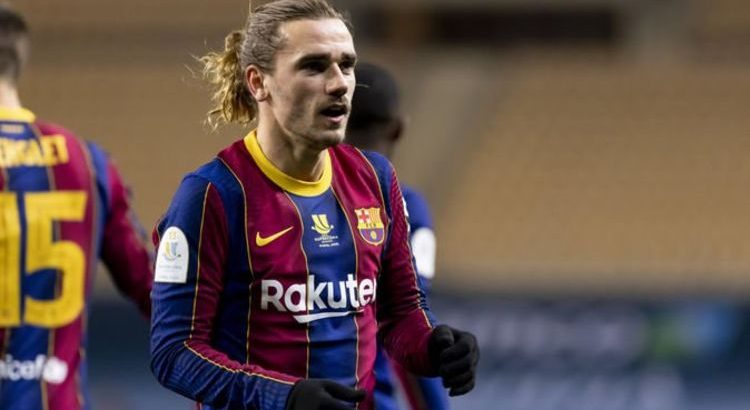 In pictures: Tottenham ease to win at Colchester

Tottenham are reportedly keeping tabs on Antoine Griezmann’s situation, with the Frenchman being ushered out of the door at Barcelona. The Catalan side are attempting to offload some of their highest earners this summer to make way for the finalisation of Lionel Messi’s new contract at the Camp Nou.

The fact that Griezmann earns around £800,000 per week at Barca is thought to be a major worry for Spurs, who know that major compromises would need to be made if he was to sign.

In light of that, a bid for the Frenchman is not thought to be immediately forthcoming, but Spurs remain interested from a distance, with the Daily Star reporting that they’ve asked to be kept updated on the forward’s situation.

Many believe that Griezmann’s preference would be to remain in Spain, which would add credence to the possibility of a return to Atletico Madrid.

A swap deal between himself and Saul Niguez had been touted in recent weeks, although wage concessions would again need to be made if that deal was to go through.

A prospective reunion could also run into problems after Griezmann left the club in slightly messy circumstances in 2019, as he attempted to force through a move to Barca.

The fact still remains that Ronald Koeman’s side are desperate to offload, although Spurs would have to obliterate their existing wage structure to come anywhere close to his current deal.

The likes of Chelsea, Man City and Man Utd had all reportedly considered making a move for the 30-year-old this summer, before eventually deciding otherwise.

Griezmann still has three years remaining on his lucrative Barca contract, but shifting him off the wage bill would logically be Barca’s main concern, rather than maximising the transfer fee.

Although a major change in circumstances would have to take place for Nuno Espirito Santo and Fabio Paratici to spring into action regarding the Barca star, such a change remains a possibility.

Harry Kane has reportedly expressed his desire to leave the north London outfit in search of silverware, a request which the Spurs hierarchy are not keen to fulfil.

The £150million price-tag attached to the England captain has successfully fended off interest so far, although relationships may become strained when Kane returns for pre-season in the coming days.

If Spurs were to concede on their mission to keep hold of Kane, the extent of their financial windfall and loss in attacking quality could prompt a decisive move for Griezmann.

However, the club will undoubtedly hope it does not come to that.

After both arriving this summer, Nuno and Paratici’s window looks poised to spring into action as the club close in on a number of targets.

Bryan Gil and Pierluigi Gollini both look likely to sign, while Takehiro Tomiyasu and Cristian Romero have been strongly linked in recent weeks.

Whether Griezmann will join that talented group currently looks unlikely, but as previously mentioned, a major change could take place at Spurs before the start of next season which would turn the situation on its head.