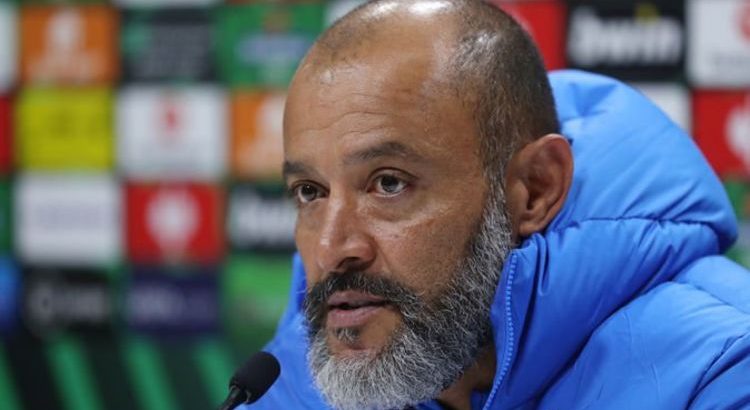 Nuno Espirito Santo has had the praise, had the plaudits, bathed in the kind words. Now the criticism, the brickbats, are starting to hit him at Tottenham – but they will not change him, he has vowed.

The defiant Portuguese insists that whether he is praised or slammed, he stays the same – totally focused on making his team better. The Portuguese was a hero at Wolves, leading the club back into the Premier League and into Europe in four superb years.

But Thursday night’s 5-1 thumping of Slovenian minnows NS Mura at the Tottenham Hotspur Stadium in the Uefa Europa Conference League only papered over the gaping cracks that are appearing just three months into Nuno’s reign in North London.

On Thursday night the Spurs manager admitted that he cannot allow what happened in the limp surrender at bitter rivals Arsenal last Sunday to happen again against Aston Villa on Sunday.

Spurs though were in severe danger of embarrassment against a Mura side only formed in 2013, until Harry Kane was thrown on to rescue the day with a late hat-trick.

This weekend, against high riding Villa at home, is when Nuno’s real test begins again, after three straight league defeats – and the 47 years old knows it.

Nuno said: “Criticism is something we have to be ready for. I understand it – but I don’t focus on it.

“My focus is helping the team find solutions. During my career I had a lot of good words and praise, but nothing changed. I keep being the same person.

“I have to make sure what happened against Arsenal doesn’t happen again. It is my job. We will stick together.”

The Portuguese made nine changes against Mura, but was forced got throw on Kane, Son Heung-min and Lucas Moura – who will all start – as things incredibly threatened to slip away.

He admitted: “The game on Thursday didn’t erase the problems that we have.

“It made things easier with the confidence we have now, so it was important. But we know Sunday will be a different game against a very good opponent.”

Dele Alli, taken off at half-time against Arsenal but bizarrely made captain on Thursday night, and then taken off again after notching a penalty, admitted he had had sleepless nights after the north London derby defeat: “It’s hard for us to take. We know how much it hurt the fans – but it hurt the players just as much, if not more.

“For me personally, after being subbed at half-time, I’ve had a couple of sleepless nights.

“We have to keep working and believe in the process.”