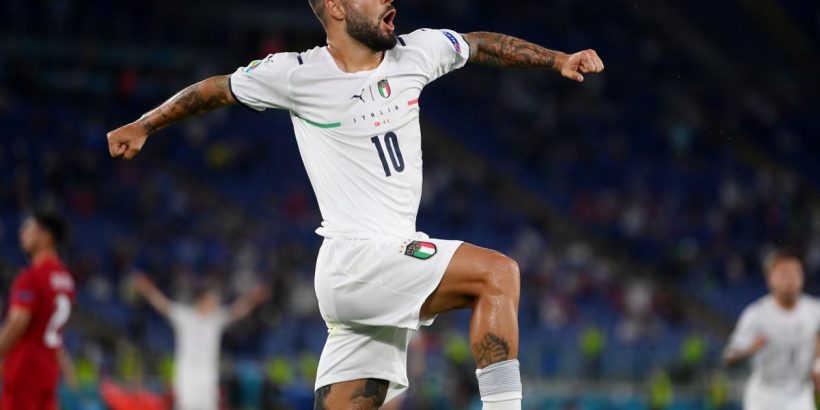 A start with a bit of class, and a classic tournament story. Italy opened Euro 2020 with the sort of supreme 3-0 win that will convince even more people they can end it as champions, while disabusing a very callow and disappointing Turkey of the notion they are dark horses. How often have we seen that? How good was it to just see a tournament game again, to feel what a festival of football is all about?

There may be many fair questions about the nature of this pan-continental tournament amid Covid-19, but much of this opening night hit the right notes. That was particularly true of Andrea Bocelli, a vintage delivery of Nessun Dorma to remind us what it is all about, and that brush stroke of a final finish by Lorenzo Insigne.

There was even the satisfaction of a vintage Italian clean sheet, the meaning of which could be seen in Giorgio Chiellini celebrating his brilliant last block on Buruk Yilmaz.

Roberto Mancini’s side laid a flag, even if it will still have to prove it can withstand greater forces. A very talked-up young Turkish side were extremely poor, in idea and execution. They just looked tired, which was all the more surprising given their supposed legs, lack of minutes compared to other squads, and the fact they were barely moving out of their own box. Senol Gunes’s side ended up being completely outrun by an Italian team pressing them all over the pitch, right up to the end of stoppage time.

Turkey started it looking overawed by the occasion, and began just trying to undercut what Italy. They just simply put a block around their box and went from there. Literally. When Cengiz Under broke forward just before the opening goal, he just had to keep going himself because he didn’t have a single teammate running with him.

In such cases, it’s difficult not to think conceding – and especially conceding the manner of the goal they did – is entirely deserved. That’s what will happen when you just cram men around the box with little ambition.

But this might also be what happens when you go with this ludicrous 24-team structure, having previously had such a clean and symmetrical 16-team format. Four third-placed sides out of six going through means managers know a single point gives you a real foot hold. If you don’t lose your opening game, you’re a third of the way there. The 1986 World Cup actually saw two teams – Bulgaria and Uruguay – go through on a mere two draws, although that was admittedly before three points for a win. It nevertheless incentivises defensive football.

We may see a lot of this over the next six days.

That’s why this game may be someway indicative for them. They were undeniably well drilled, which is perhaps inevitable when their manager is Mancini. He is one of only three in the entire tournament to have won one of the five major leagues. That higher class could be seen in so many little angled passes, so many nice moves – many emanating from Jorginho.

The only issue going forward – both up front and in the tournament itself – is that lack of true top-league higher-class among the players. That was the overriding impression for a lot of the game before Turkey caved: that Italy looked very good, but were just lacking something. Marco Verratti and Federico Chiesa enjoying greater influence could of course change that. For much of the first hour, though, it was just like Italy were brilliantly drilled but lacking the individual the inspiration to turn that possession into a lead. Domenico Berardi had snatched at one chance, as Ciro Immobile sent one well wide.

Both were to prove decisive in winning the game, for their part, but after an opening goal that could possibly only come from one conceivable way.

Berardi did very cleverly, both in terms of his turn, and his ball. He used the amount of Turkish players in the box against them, by forcing Merih Demiral into a decision and ultimately forcing him into sending the ball into his own goal.

After that, Turkey were spent. That applied to their idea and their energy. From there, Italy were just able to pick them off.

The space was there, the mistakes were there. Ciro Immobile finally got his goal by pouncing onto a slip in the box, before then supplying the ball for the moment of the game. The Lazio forward bisected the Turkish defence with a brilliant pass, allowing Insigne to swish the ball home.

It was a fitting flourish to Italy’s fully deserved win, even if it perhaps make the win and the team look better than they necessarily were.

This isn’t to doubt the side’s quality. They are clearly good. The question is about whether they can be champions.

Italy have now fully put themselves in that conversation. Much of the talk about Turkey now appears misguided. They have a lot to do to recover from this, and retrieve their chances of qualification. Italy can look so much further.