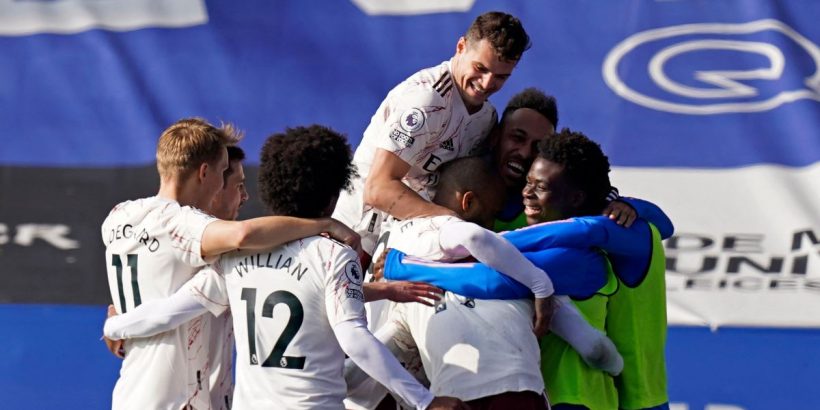 The struggling duo of Willian and Pepe will take the praise, with both men among the goals and assists at the King Power Stadium.

However, there may be two players who went under the radar during the comfortable win over Brendan Rodgers' side.

Firstly, Alexandre Lacazette, who found the net from the penalty spot in the first-half.

The Frenchman now has five goals and two assists in his last six away matches in the Premier League, which has helped take the burden off the likes of Pierre-Emerick Aubameyang in recent weeks.

Lacazette only had one shot on goal during the win, which he scored from 12 yards out.

But the attacker had a pass success of 85 per cent, higher than most his Arsenal team-mates.

To add, Lacazette also attempted six dribbles, double that of any of his co-stars, with Willian coming closest to matching him with three.

However, what fans enjoyed most about the 29-year-old's performance was his hold-up play.

Another player who quietly went about their business for Arsenal on Sunday afternoon – Granit Xhaka.

The midfielder enjoyed more possession than any other player on the pitch, with just under eight per cent.

Xhaka's pass success rate was also 88 per cent, which was only beaten by Willian when it comes to players who started the tie.

Also, the Swiss powerhouse avoided a yellow card, which will come as a surprise to many Gunners fans who have watched him pick up frequent bookings over the years.

Speaking this week, Xhaka admitted he was happy to stay at the club after a tricky few years.

“If I’m honest I always saw myself in this club,” Xhaka said.

“I didn’t come to this club for two or three years, I came here for long-term. Of course, you never know what happens in football.

“After what happened with the fans one year ago nobody was thinking I would still be here and speak with you guys. This is football. Sometimes things happen, you are very surprised but the good thing is how you come back.

“I come back very strong thanks to the help of the team, the coach and the club made it easier.”