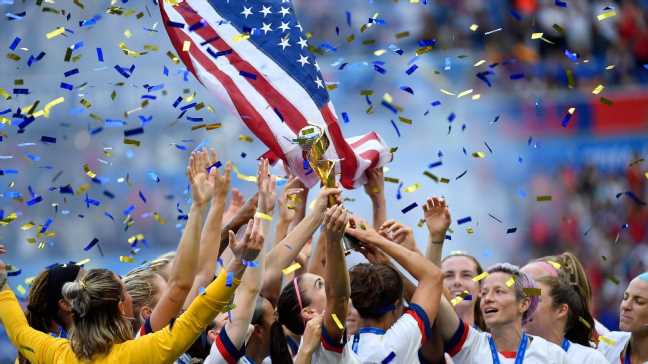 U.S. Soccer Federation president Cindy Parlow Cone said Tuesday that with the regard to the equal pay lawsuit filed by players on the U.S. women’s national team, asking the federation “to make up the difference in FIFA prize money is untenable, and would likely bankrupt the Federation.”

Joined by USSF CEO Will Wilson on a conference call with reporters, Cone emphasized that she and the rest of the federation “are committed to equal pay” for national team players, but added the USSF can’t accede to the players’ financial demands — which includes $66 million in back pay — due to having no control over FIFA prize money.

“You all know that largest hurdle is the massive and frankly unfair difference in FIFA World Cup prize money for men and women, a funding source that U.S. Soccer does not control,” Cone said. “It’s solely controlled by FIFA. As it stands, the women’s team wants U.S. Soccer to pay for past and future discrepancies in FIFA prize money. This is well over $50 million for the past two World Cups and an unknown amount for the future.”

The players have asked the 9th U.S. Circuit Court of Appeals to reinstate the equal pay portion of the lawsuit they originally filed in March 2019. That part of the suit was thrown out by U.S. District Court Judge R. Gary Klausner in May of 2020 when he granted partial summary judgement to the USSF, ruling that the women rejected a pay-to-play structure similar to the one in the men’s agreement and accepted greater base salaries and benefits than the men. The players and the USSF settled claims on working conditions back in September, which calls for charter flights, hotel accommodations, venue selection and professional staff support to be equitable to that of the men’s team.

Players’ spokesperson Molly Levinson issued the following statement to ESPN: “As all eyes are on the USWNT preparing to compete on behalf of the USA at the Olympic Games, USSF is back at it, using tactics like blaming FIFA, holding press conferences, and hiring lobbyists in phony attempts to make unequal pay seem like it is equal pay. It is not and players, fans, sponsors, lawmakers know better — and have stood with the USWNT in demanding an end to USSF’s discrimination. If USSF is committed to equal pay, then there is nothing stopping them from paying the women players equally.”

In terms of a potential settlement, both Cone and Wilson said they would be open to starting talks “at the appropriate time,” meaning after the Tokyo Olympics, where the U.S. women are heavily favored to win the gold medal. She added that, “If we can find creative way to come to resolution on [the bonus money], I’m very hopeful.”

Cone added that the two sides were able to come to an agreement on the working conditions claims, and hopes the two sides can build off that and “come to resolution on this outside of court.”

The same is true for a new women’s Collective Bargaining Agreement (CBA), which is due to expire at the end of the year.

Wilson said that the USSF has made “a lot of progress” with the union representing the men’s national team players as it pertains to a new CBA and is “on a good path towards getting an agreement done.”

The men’s union has been operating under an agreement that expired at the end of 2018. Wilson added that a new agreement for the men will include retroactive pay.