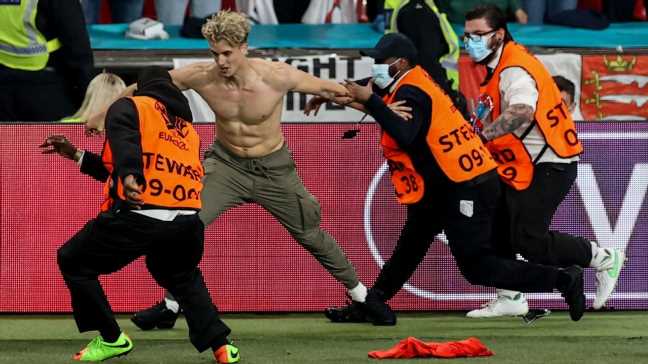 UEFA has opened a formal investigation into the storming of Wembley Stadium by supporters at Sunday’s Euro 2020 final, in addition to charging the English Football Association with four separate offences relating to the conduct of fans.

England’s first appearance in a tournament showpiece for 55 years ended in defeat on penalties to Italy and was overshadowed by scenes of violence both inside and outside the ground. British police, who said 19 of its officers were injured, have so far arrested a total of 86 people. Some 53 of the arrests were at Wembley.

It is estimated that as many as 5,000 supporters gained access to the stadium without a match ticket. Sources told ESPN that ticket readers stopped working for a period and fans either “tailgated” their way in — quickly following behind those with legitimate tickets — or broke in through entrances designed for disabled supporters.

Videos circulated on social media of fights breaking out on the concourses while stewards were overwhelmed as hundreds of people arrived with tickets only to find someone already in their seats.

Despite England manager Gareth Southgate’s prematch plea to respect the Italian national anthem, loud boos were heard throughout, a pitch invader delayed the final few minutes of normal time and objects were launched at Italy players as they celebrated their penalty shootout success.

The FA have launched their own investigation in conjunction with Metropolitan Police, but UEFA added: “Separately, and in accordance with Article 31(4) DR, a UEFA Ethics and Disciplinary Inspector has been appointed to conduct a disciplinary investigation into events involving supporters which occurred inside and around the stadium.”

Fans began congregating outside Wembley around 12 hours before kick-off. The crowd steadily grew — estimated in some quarters to be as high as 250,000 people — with the mood turning increasingly violent as kick-off approached.

COVID-19 restrictions limited Wembley’s capacity from 90,000 to 65,000 and some fans sensed an opportunity to force their way in. One of the key questions to be answered moving forward will be why the outer perimeter was so close to the stadium. The outer barrier to most venues at European Championship tournaments and World Cups is often half a kilometre away or further from the venue itself. At Wembley, the outer perimeter ran tightly around the stadium, including at the base of the steps to access the outside of the upper levels.

Families of players from both teams were affected. A group of Italy’s entourage, including the wife of midfielder Jorginho, were moved en masse, while sources told ESPN that the family members of several England players were abused by fans who had forced their way into the arena.

The stairways were visibly overflowing with supporters. Andrea Mancini, the son of Italy head coach Roberto, said: “There was a mess with ticketless fans and my seat had been taken, so I had to watch the first half sitting in the stadium’s steps. I found another place in the second half. Perhaps it brought good luck.”

Last week the FA were fined €30,000 ($35,460) after a laser pointer was shone at Denmark goalkeeper Kasper Schmeichel during what proved to be the deciding moment of their Euro 2020 semifinal.

The FA were also charged for fans booing during the Danish anthem and for the setting off of fireworks during the semifinal.

Information from Reuters was used in this report.