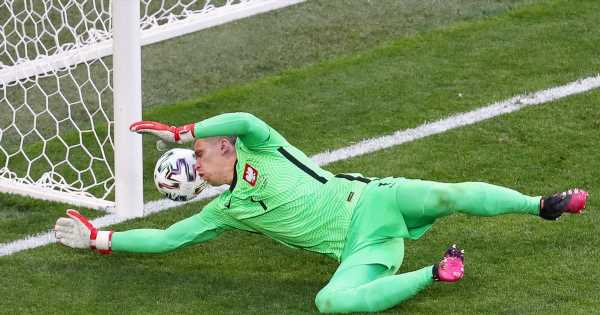 Juventus goalkeeper Wojciech Szczesny entered the European Championships record books on Monday – and the former Arsenal star has every right to feel aggrieved.

Szczesny has been named as the first shot-stopper to score an own goal in the history of the Euros after conceding a first-half goal in Poland's group stage defeat to Slovakia.

Midfielder Robert Mak fired a shot at the near post, which bounced off the woodwork and was helped home by the Poland international.

Many were surprised to see the goal taken away by Mak, which resulted in Szczesny receiving an unwanted statistic.

But the Poland keeper has every right to feel hard done by if considered the first keeper to score an own goal at the European Championships.

England supporters may well remember Wayne Rooney's performance against Switzerland in the group stages at Euro 2004, during which he scored two goals in a 3-0 win for the Three Lions.

His second strike of the game bounced off the post onto Swiss keeper Jorg Stiel before crossing the line, but the goal was credited to Rooney regardless.

Speaking after England's group stage match in 2004, Uefa spokesman Rob Faulkner said: "The original shot was on target so we confirm that Rooney is the scorer."

England boss Sven-Goran Eriksson was hopeful that the goal would be given to the then Everton striker when delivering his post-match verdict.

"I don't know how Uefa look at these things but it would be a pity if it's an own goal," said Eriksson.

"He did everything and I hope the goal is his."

The decision for Slovakia's first strike of the afternoon to go down as a Szczesny own goal has continued a theme of bad luck for the 31-year-old in opening matches at the Euros.

He was sent off at Euro 2012 against Greece for bringing down Dimitris Salpingidis and suffered an injury at Euro 2016 versus Northern Ireland, ruling him out for the remainder of the tournament.