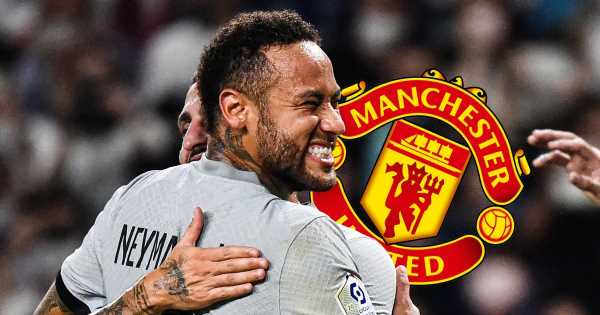 With Cristiano Ronaldo's future at Manchester United still up in the air with just one week left until the start of the season, one name reportedly on manager Erik ten Hag's list of replacements is Brazilian star Neymar.

United have already recruited Argentinian centre-back Lisandro Martinez from Ajax and Tyrell Malacia from fellow Eredivisie club Feyenoord over the summer. Danish international Christian Eriksen has also signed on a free, and the Red Devils have been fighting Spanish giants FC Barcelona all window for the services of Dutch midfielder Frenkie de Jong.

However, with Ronaldo's exit still on the cards, the club is reportedly looking for big names to replace him. Neymar, one of the world's biggest stars, would certainly fill both the headlines and shirt sales if he was to make a move from Paris to Manchester and is one of a few candidates that Ten Hag is apparently looking at.

So how would Ten Hag's debut managerial season with United go if he had Neymar instead of Ronaldo? Could the Brazilian lead them to a trophy where the Portuguese legend failed? We simulated the entire 2022/23 season to find out.

To set up the simulation, we used the in-game editor for Football Manager 22 to allow the transfer of Neymar to United to happen in the summer transfer window.

Looking at his in-game attributes, he has everything you'd want in a winger – expert Dribbling (20), Technique (20) and a First Touch (18) that can stop a ball dead, making it easier to use his Agility (18) to get past defenders and cut inside for a shooting opportunity. The Brazilian is capable of using his other incredible Technical attributes to grab both goals and assists in whatever position he plays in for whatever side he plays for.

Over 38 games in our 2022/23 season, Neymar bagged 14 goals and managed nine assists for United off of an impressive 9.21 xG. He had a good spread of goals over different competitions as well, including three goals in just two FA Cup games in his debut season for United. The Brazilian also had an average rating of 7.46, making him the best player in the squad ahead of Eriksen (7.36), Marcus Rashford (7.31), Bruno Fernandes (7.31) and Raphaël Varane (7.26).

Comparing his Premier League stats to his attacking teammates, Neymar scored the third most goals behind Rashford (14) and Fernandes (13), won the most Player of the Match awards with 5, had the best Pass Completion % (88%), won the Most Tackles per game (1.81), completed the second most Dribbles per 90 (2.59) and had the highest Shots on Target % (53%).

At the end of the season, FM22 put out the Best XI for the United squad, pulling out player statistics, league data and other metrics to come to a conclusion.

New signings Neymar, Eriksen and Martinez all made the Best XI as Ten Hag set up in an attacking 4-2-3-1 formation. Rashford replaced Ronaldo as the sole striker for United as he lined up in front of a three-man attacking force of Neymar, Fernandes and Jadon Sancho.

Manchester United's overall 2022/23 season according to the simulation

As far as domestic seasons go, United's was a rollercoaster with plenty of highs and lows. Fifth place in the Premier League was one place better than the 2021/22 campaign and they'd see some progress – three more wins over the season and conceding 13 fewer goals is certainly an improvement. United also scored the same amount of goals as in 2021/22 so the loss of Ronaldo wasn't felt as much as some might've expected.

Their cup competitions were similar to their league campaign – a Fourth Round exit in the Carabao Cup via a 3-2 loss to Southampton wouldn't have felt great but Neymar and United rebounded to win the FA Cup on penalties against Newcastle United after a 2-2 draw in Extra Time.

Their Europa League campaign started well – topping Group G over Borussia Mönchengladbach, Dinamo Zagreb and FC DAC 1904 with 15 points sent a statement to the rest of the competition. They'd face Borussia Dortmund in the Round of 16, dispatching them with a 2-0 victory thanks to goals from Fernandes and Rashford.

Their Quarter Final matchup against A.S. Roma wouldn't go the same way, however. A 3-2 away loss in the first leg meant United were still in with a chance to progress to the semi-finals at Old Trafford, but a staunch display from Roma led to a 0-0 draw and sent the Red Devils out of the European competition.

Overall, it would probably take some time for Neymar to adjust to the Premier League but 14 goals and nine assists in his debut season with United is a good return. Despite not making the Champions League for the second straight season, it must be remembered this would be a transitional period for United so it'd take time for true chemistry to form under Ten Hag's tactical mindset.

Let us know how you think Neymar would perform in the Premier League in the comments below!