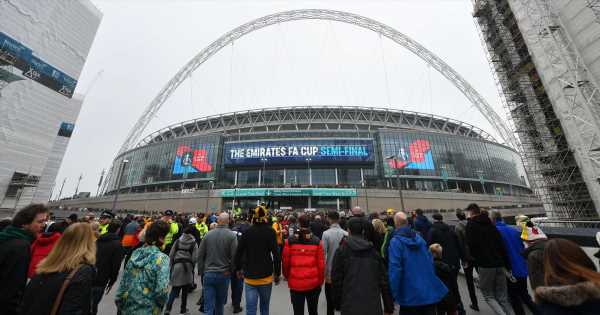 Wembley has been identified as a possible host for the Champions League final – at the end of May – following the announcement of the UK 'Red Zone' list.

Manchester City and Chelsea both booked their tickets to Istanbul's Atatürk Olympic Stadium last week with victories against PSG and Real Madrid, respectively.

However, Turkey's ability to host the final has been cast under a shroud of uncertainty as the third wave of Covid-19 continues to explode in the country.

UK Prime Minister, Boris Johnson, has offered to bring the all-English final to British shores, and a report by the Telegraph has given it a '50/50 chance.'

This announcement has effectively banned fans from the final, and those returning from the game – including both teams – will have to quarantine for 10 days in a hotel for £1,750.

And, with a large amount of English player involved in the final, quarantine would hinder Gareth Southgate'sEuro's preparation with star players locked in a hotel for over a week.

“The Champions League is the pinnacle of European club football," Johnson told the Sun.

"And with two English teams in the final, it would be a great shame if fans were unable to attend. It would be brilliant to host it here if we can.

"I want to help supporters of both clubs see their team in action.”

The Telegraph are reporting that Wembley has emerged as the only viable option after both Lisbon and Budapest were ruled out.

However, a switch of the venue – just three weeks before the final – will leave the Turkish Football Federation livid, who were already stripped of the hosting rights last season.

Furthermore, Wembley is already scheduled to host the Championship playoff final on May 29 – however, that would be rearranged.

"UK officials seem to insist, but we are moving ahead according to Uefa directions and statements," The Turkish FF told the Telegraph.

"We will be hosting the final in Istanbul."