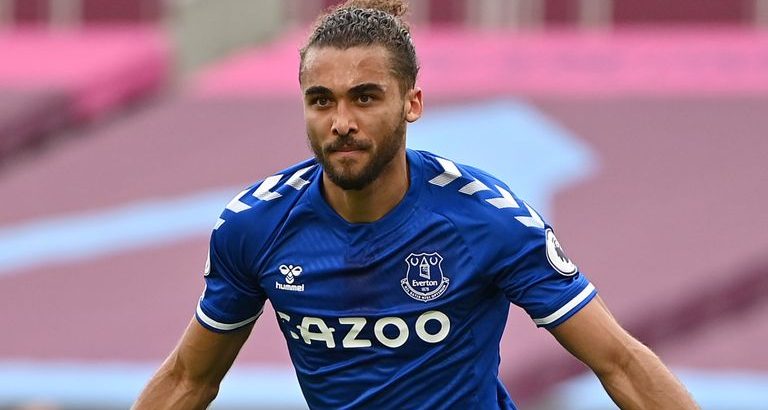 Match report and free highlights as Everton secure 11th Premier League away win of the season to dent West Ham’s Champions League hopes; Dominic Calvert-Lewin scores the only goal at the London Stadium

West Ham suffered a major blow to their Champions League hopes as Everton breathed renewed life into their own with a hard-fought 1-0 win at the London Stadium on Super Sunday.

Dominic Calvert-Lewin scored the crucial goal on 24 minutes as he latched onto Ben Godfrey’s through ball to steer his low shot beyond Lukasz Fabianski.

The visitors’ goal led a charmed life at times, with Said Benrahma missing a glorious first-half chance before Vladimir Coufal struck the inside of the post after the interval.

Everton stay in eighth place, but move to within three points of their opponents in fifth, with their game in hand against Aston Villa taking place on Thursday evening. 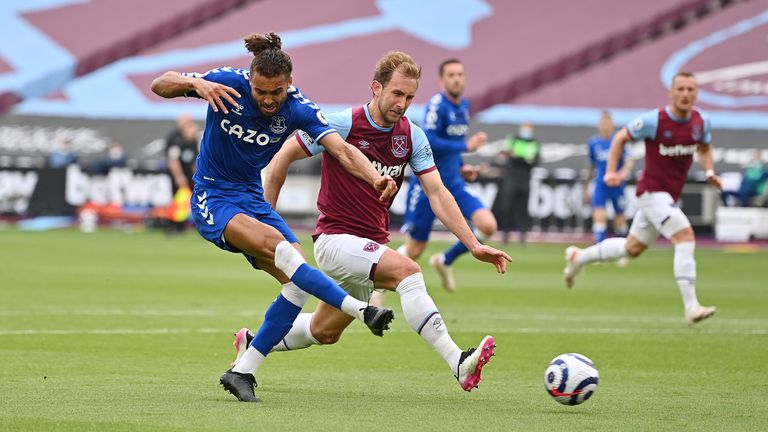 How Everton raided the East End

Man of the match: Allan.

This was the last game at the London Stadium without supporters. When Southampton are the visitors on the final day of the season, there will be 10,000 season-ticket holders in the stands.

The residents will find out then if a fine season will be rewarded with European football, but three defeats in West Ham’s last four league games has made the prospect of this stadium being graced by Champions League opponents increasingly unlikely.

Everton arrived having lost just one of their previous 12 away league meetings with the Hammers, and they very nearly found the early breakthrough when Gylfi Sigurdsson’s corner was flicked towards Calvert-Lewin at the far post but Tomas Soucek was in the right place to head clear.

West Ham were looking to complete their first league double over Everton since 1972/73, following their 1-0 win at Goodison Park in January, but they fell behind on 24 minutes. Godfrey drove into midfield and timed the perfect pass behind Issa Diop for Calvert-Lewin to steady himself and find the far corner for his 16th Premier League goal of a productive season. 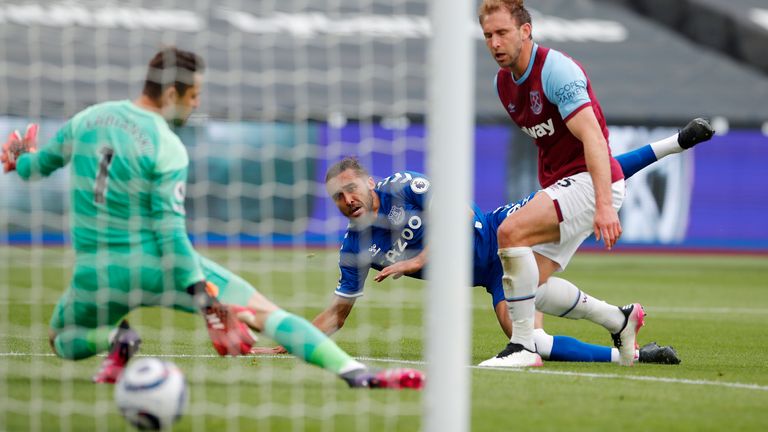 David Moyes’ side reacted well to conceding the first goal against Burnley last Monday, and they nearly found the perfect response again as Seamus Coleman blocked Benrahma’s shot before Jesse Lingard’s delicious curler from just inside the box veered inches wide of the post with Jordan Pickford beaten.

Everton were not sitting on their lead, however, with Sigurdsson drawing Fabianski into a fine save from his 25-yard free-kick.

It was not the only sight of goal Carlo Ancelotti’s side had during the opening period as a route-one ball was flicked on by Calvert-Lewin into the path of Richarlison, but Fabianski got down well at his near post to field the shot. 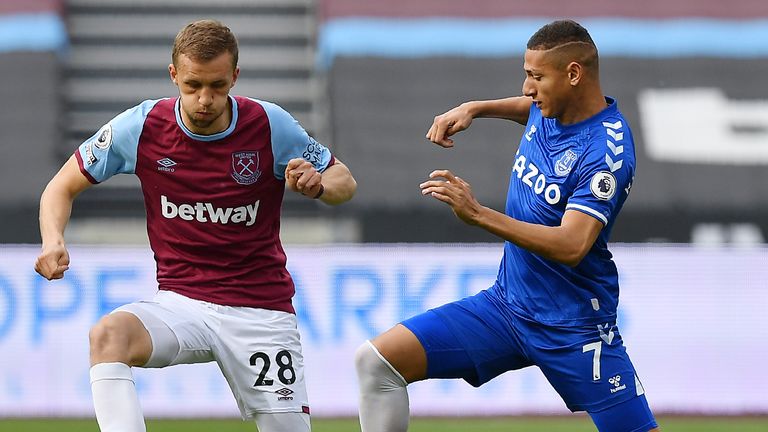 You sensed the Merseysiders needed a second given their recent run of one win in their last seven Premier League games, and they ought to have been pegged back with six minutes of the half remaining when Pablo Fornals was afforded too much time to cross but Benrahma somehow headed over at the far post.

Graeme Souness told Sky Sports: “He sees it coming a long way, he tries to guide it into the corner but he gets the direction wrong.”

Moyes stood with a pensive gaze on the touchline, and he was soon contemplating an enforced change as Manuel Lanzini hobbled off with a strain, making way for Jarrod Bowen shortly before the break. There were no changes at the restart and no change to the fast-paced nature of the contest at the start of the second half with West Ham looking to force the issue. England assistant manager Steve Holland watched on in the stands, and he will have been impressed by Pickford’s commanding presence as his instructions continued to echo in the empty surroundings.

On 55 minutes, Tom Davies was in the right place to block a Fornals shot from Coufal’s header back across goal. Aaron Cresswell became the second West Ham player forced off through injury as Moyes’ problems mounted, but they very nearly found the equaliser on the hour-mark.

Fornals’ pass sent Coufal into space down the right but his shot across goal thudded against the inside of the post, with Bowen’s attempt from an acute angle on the follow-up gleefully landing in Pickford’s gloves. 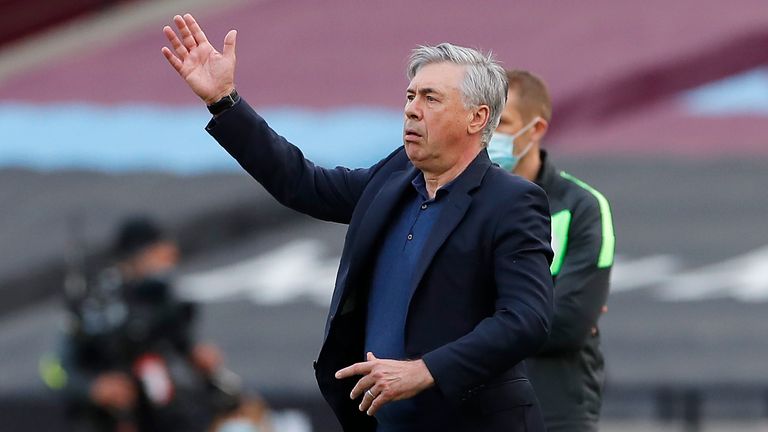 It was a huge let-off for Everton, as Moyes looked to Andriy Yarmolenko in a last roll of the dice. Ancelotti’s men stayed compact and looked menacing on the counter-attack as an important tracking run from Soucek denied Richarlison from linking up with Calvert-Lewin before Coleman was thwarted by a last-ditch bock from Lingard as he pulled the trigger.

Everton ought to have added a second when Calvert-Lewin was again played through, rounding Fabianski before selflessly crossing for Joshua King to rise and strike the post. But it would not prove costly, as with Coufal’s rising shot in stoppage time went West Ham’s hopes of a late reprieve.

Man of the match – Allan There were several impressive performances from the men in blue with Godfrey and Calvert-Lewin excelling, but none more so than Ancelotti’s midfield enforcer Allan.

His absence has been felt by Everton when he has been out injured, but here he demonstrated why his manager was so determined to be reacquainted with him once more having worked together at Napoli.

Allan produced four tackles and made two interceptions, more than any other Everton player.

Alan Smith told Sky Sports: “He’s played a central part sat there in front of the back three. He’s got his foot in the way lots of times. He’s been an example of the determination from Everton’s players. There has been a real tenacity out there today.”

On the final blow of referee Stuart Attwell’s whistle, Calvert-Lewin slumped onto his back in exhaustion. The striker had run himself into the ground on a big pitch and had given a clinic in hold-up play for his side. Such has been his rise this term, there was little surprise his 21st goal in all competitions decided a contest high on quality but low on clear-cut chances.

Much was made of Ollie Watkins coming out on top in their battle last weekend at Goodison Park, but on the day the Aston Villa striker saw red against Manchester United, this was a reminder of who remains best-placed to be Harry Kane’s understudy at Euro 2020.

With Everton looking to wind down the clock in the closing stages, King was guilty on more than one occasion of choosing the wrong pass, wasteful too with a glorious chance presented to him by Calvert-Lewin. The striker thrashed at his thighs in frustration. It was another indication of the raised standards in a player going places. The question now is whether Everton can move along with him. West Ham visit Brighton at the Amex Stadium on Saturday, live on Sky Sports Premier League and Main Event; kick-off is at 8pm.