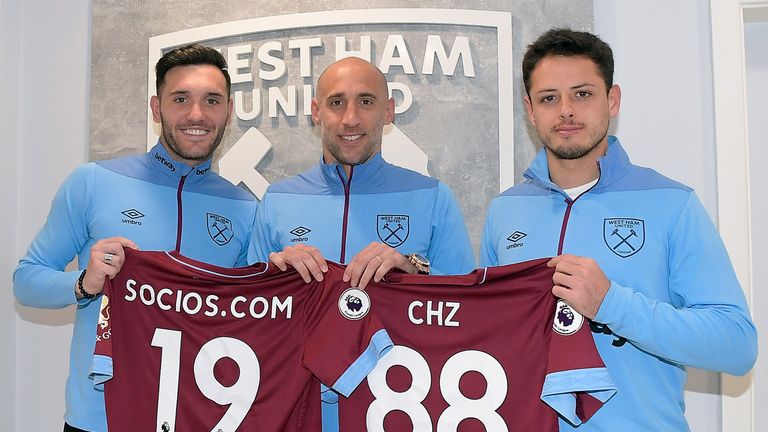 West Ham have joined Paris Saint-Germain and Juventus in offering supporters the opportunity to vote on what they describe as “soft decisions”.

This could include the man of the match award or even deciding which players the TV cameras focus on during pre-match.

It is part of a new fan-engagement initiative, but it will not be for free as supporters will have to buy tokens in order to cast their votes.

54 per cent of football fans in the UK felt that they should have more influence over club decisions, according to Socios research

The club will seek the input and opinion of fans by running exclusive polls on the mobile app, Socios.com, with the fan tokens offering the opportunity to vote and share their voice.

What kind of decisions do West Ham expect to allow fans to make?

Virani: “We’re in the infancy of our project here with Socios.com having only recently concluded our agreement to partner with them. The focus is on giving fans the ability to enhance their experience no matter where they are – this could be anything from voting on Socios.com for the man of the match that gets announced in the stadium, to picking questions to ask one of our players in an interview for Socios.”

How do West Ham see this as the future of fan engagement?

Virani: “We’re a big believer in digital here at West Ham United and in particular utilising the opportunities that digital presents to us to engage with our fans around the world in new and innovative ways. The vision and plan Socios.com have for their platform is extremely impressive and all stems from wanting to create ways for fans to feel closer to their club than ever before – something all football clubs are trying to get better at. We already interact and listen to fans globally through a number of ways online and absolutely see this as another way for us to build further engagement with those communities around the world, whether they are here in east London or somewhere further afield.”

How does Socios believe the app will change the Premier League, and what success has been had with Juventus and Paris Saint-Germain?

Dreyfus: “Our aim at Socios.com is to empower fans all over the world to take an active role in influencing our partner football clubs. Last year, we worked with Nielsen on some fan research and discovered that 54 per cent of football fans in the UK felt that they should have more influence over club decisions. For us, this was a powerful statistic. Fans are the lifeblood of football and we are the platform that will allow the voice of those fans to be heard.

“I applaud West Ham United, as well as our other partner clubs, in taking an important step towards further fan engagement, and believe we are one step closer in bringing Premier League fans closer to their clubs.

“It’s too early to talk about successes, however, the reaction from fans and sponsors has been overwhelming, and their excitement palpable, with fans welcoming the chance to finally have their voices heard.

This appears to resemble a fan-ownership model – but without supporters actually gaining any shares. What do they stand to gain?

Dreyfus: “Socios.com resembles the ‘Socios’ model of management employed by the likes of clubs such as FC Barcelona and Real Madrid. We have taken this model one step further, dubbed “Socios 2.0”, allowing fans to actively participate in decisions delegated by our club partners. However, ownership of West Ham United fan tokens doesn’t just give fans voting rights, but also access to games and exceptional club-specific rewards.

Dreyfus said the company expects to announce more European and Premier League partner clubs in the near future.

“Fan tokens do not offer ownership, part ownership, equity or shares in clubs, and for very good reason. Selling shares in football clubs is a complicated business. Aside from the regulatory and legal restraints of offering securities, telling fans that they can ‘gain’ or expect a return on investment in football clubs is dangerous. Moreover, we are not here to change the ownership model of football clubs; we’re just here to give fans a better and closer connection to their clubs.”

How much can West Ham fans expect to pay for tokens?

Dreyfus: “We haven’t yet agreed a price for each West Ham United fan token, but like with our other club partners, the price point will be low (under £10) so as to be affordable and accessible to all fans – and so fans can buy more than one if they choose. Fans can also earn or hunt for fan tokens for free.