Allegri, who has won the Serie A title during each of his five years in charge, had a year remaining on the contract extension he signed in 2017 but he will not see it out as the Bianconeri continue in a different direction.

A statement on the club’s official website read: “Massimiliano Allegri will not be on the Juventus bench for the 2019/2020 season.

Allegri broke the news to the Juventus players and staff at the training ground alongside veteran defender Andrea Barzagli, who is retiring at the end of the season,

According to Sport Mediaset, Allegri said: ”Sunday will be Barzagli’s last match… and mine too.”

The 51-year-old was reportedly overcome with emotion.

Juventus have issued the statement ahead of their final home game of the season against Atalanta on Sunday.

Sport Mediaset claim the news of Allegri’s departure elicited a mixed reaction from the first-team squad.

But Ronaldo, the club’s record signing, reportedly made a stand for his boss.

According to Sport Mediaset, Ronaldo whispered: “Sunday we play for him.”

The question now turns to who will replace Allegri.

Here, Starsport looks at the contenders to replace the Italian at the helm.

The former Bianconeri boss is the early favourite with the bookmakers to make a return to Turin, having managed the club between 2011 and 2014. Conte delivered the Serie A title in each of his three seasons in charge of Juventus, winning the league with a record points total of 102 during the 2013-14 campaign. An icon as a player in the black and white stripes between 1991 and 2004, the 49-year-old knows the club inside-out and would be a popular choice amongst most supporters.

Conte won the Premier League at the first time of asking with Chelsea and followed that up with an FA Cup success the next season, so he has proved himself to be a serial winner. He will be refreshed and refocused almost a year after leaving the Blues. 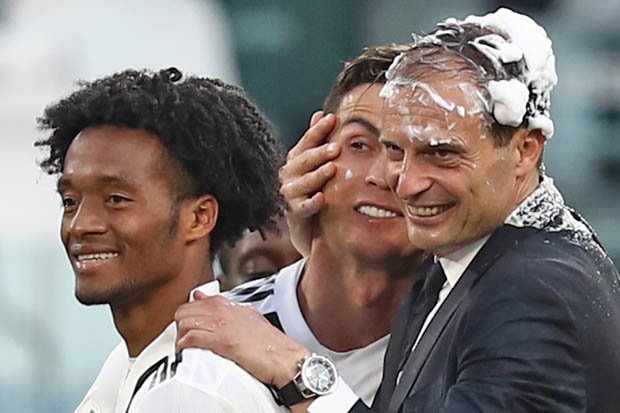 There has been a lot of speculation about the future of the Manchester City boss of late, despite his current contract running up until 2021. Guardiola has thrived in Spain, Germany and England, where his Premier League champions have the opportunity to complete an historic domestic treble in the FA Cup final on Saturday – having won the League Cup in February. With that in mind, Italy could be the next logical step in his career.

Guardiola failed to win the Champions League at Bayern Munich and has yet to deliver it at Manchester City, with his last success in the competition coming with Barcelona in 2011.

The former France international and manager, a no-nonsense centre-back in his playing days, guided Bordeaux to an unlikely second-placed finish in his first managerial job before claiming the Ligue 1 title the following year after setting a then competition record of 11 straight victories.

Blanc became France manager in 2010 and lost to eventual 2012 European Championship winners Spain at the quarter-final stage before stepping down after the tournament. Paris St Germain followed, where he won 11 trophies in three seasons before he left in 2016. The 53-year-old has not managed since.