That is according to eight-time Premier League winner with Manchester United, Gary Neville.

The Reds took a huge step yesterday towards clinching their first top-flight trophy in 29 years.

Tottenham were Liverpool’s toughest opponents left on paper this season, and they escaped unscathed on Merseyside.

Klopp’s side have been a true force at home this term, winning 14 of their 16 league matches at Anfield, drawing the other two against title rivals Manchester City and 2016 champions Leicester.

The Reds have played 16 games away too now.

And although they have conceded one less goal away from Anfield with just nine, Liverpool have slipped up more with results, picking up three points on just 10 occasions – drawing five and losing once at City.

The debate over their remaining games comes as: 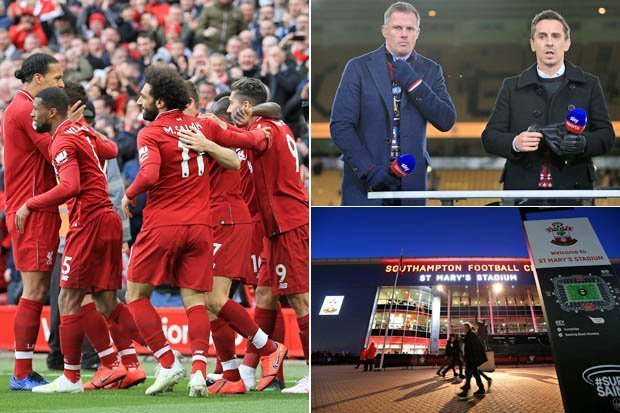 Coming up for Liverpool is a trip down to the coast as they take on in-form Southampton at St Mary’s on Friday night (8pm).

While bottom-half sides are only left to come away in the Saints, Cardiff and Newcastle, Neville feels they will be a greater threat to Liverpool’s hopes of silverware than Spurs.

“I don’t think today is the toughest game for Liverpool,” Neville said on the Gary Neville Podcast after Liverpool’s 2-1 win over Spurs.

“I think Southampton away, Cardiff away, even Newcastle away, could provide tougher and sterner opposition.

“It’s those games that can sometimes freak you out a bit, especially as a couple of those teams are in relegation battles.

“We are at Southampton on Friday and Liverpool will start as favourites, but those games can be tougher than this type of game, when everybody is up for it, the fans, the players, and it’s an obvious difficult opponent.

“I don’t see Tottenham and Chelsea at home as the games that will catch Liverpool out. If they are going to have a problem I think it will be those away games.

“I also think City have an advantage in the next four games as they play in front of Liverpool. I think it’s always an advantage to play first so they can get the points on the board and put pressure on.”

Ex-Liverpool star Jamie Carragher disagreed with Neville’s take on the final six fixtures, though, saying: “I think for Liverpool, they probably have the toughest game on paper out of the way, and if they get past Southampton and Chelsea and are in the same position, that’s when City’s tough run comes.

“But don’t worry about City if you are Liverpool and vice versa.

“Both teams go about it in different ways. Liverpool probably aren’t going to win too many games 4-0 or 5-0 while City, when they are on form, will win by three or four.”

Newcastle vs Liverpool – Saturday, May 4***

Liverpool vs Wolves – Sunday, May 12

Brighton vs Man City – Sunday, May 12

Vardy forced off against West Ham with suspected hamstring injury