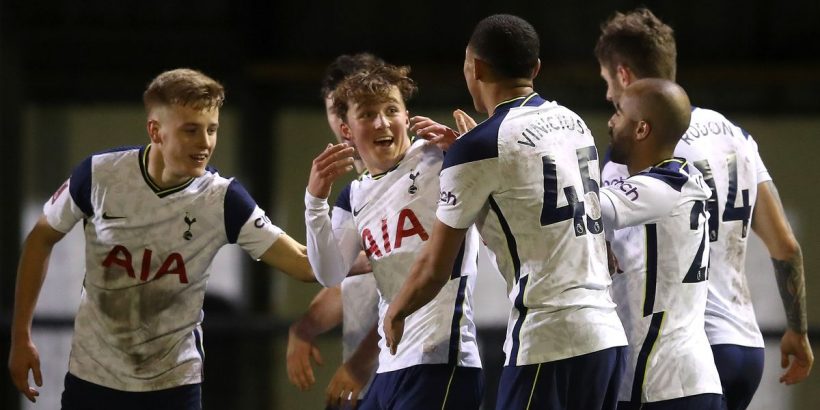 Alfie Devine announced himself to the world with a record-breaking goal in Tottenham's FA Cup crushing of non-league Marine.

The 16-year-old midfielder was named in Jose Mourinho's squad for the third-round tie and didn't take long to make his mark after his substitution at half-time, with Spurs 4-0 up.

15 minutes after his introduction, Devine collected the ball from Lucas Moura, turned in the box and rifled in at the near post to extend the visitors' lead.

In doing so, Devine became the youngest goalscorer in Spurs' 138-year history.

The teenager's performance in the FA Cup means he may be in line for further first-team opportunities – and here Mirror Sport tells you all you need to know about Spurs' latest academy prospect.

Devine played for Liverpool until he was 11 and came through the ranks at Wigan Athletic, before a move to Spurs last summer for a reported fee of £300,000.

He had been training with Wigan's first team and penned a long-term deal with the club, only for the Latics to enter administration.

He has been used in a variety of roles since joining Spurs, spending the bulk of the season playing in central or holding midfield roles for the Under-18s

Devine's performances caught the eye of academy staff and he was promptly handed opportunities with the Under-23s.

After scoring on his debut in Premier League 2, the England Under-16 international played a further three games and grabbed headlines in December after a clash with Chelsea's Danny Drinkwater.

Devine lunged in on the former England international, prompting a fiery response for which both players were given their marching orders.

Jose Mourinho has clearly had his eye on the youngster for some time, naming him in the squad to face Ipswich in a friendly last August.

The Spurs boss will have been delighted by Devine's performance on his senior debut – and the teenager may hope he has played his way into contention for involvement in the second half of the season.

Born two months after Mourinho's "I think I'm a special one" unveiling at Chelsea, Devine is the 'special one' emerging from Tottenham's academy.

What did you make of Alfie Devine's senior debut for Tottenham? Have your say in the comments.