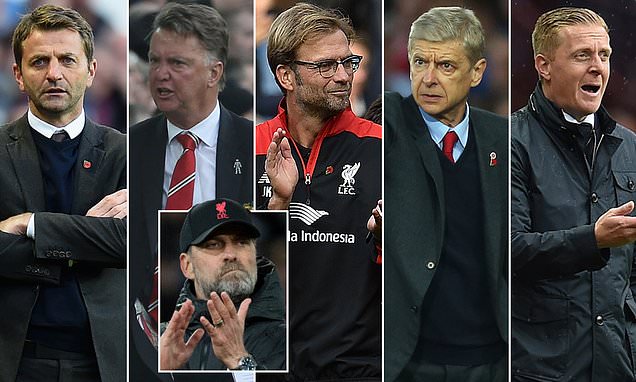 Just ONE manager from when Jurgen Klopp took over at Liverpool is still in the Premier League… but what are the other 18 up to now? After the Reds boss’ latest triumph, we look back at who else was in the dugout when he arrived in October 2015

When Sean Dyche was sacked by Burnley earlier this month, Jurgen Klopp became the longest-serving manager in the Premier League – and it looks like he’ll be holding that title for a long while yet.

At the end of last month, Klopp extended his Liverpool contract until 2026 despite previously stating he would leave the club in 2024.

Liverpool appointed Klopp on October 8, 2015, and as a look at the list of his Premier League contemporaries at that time shows, six-and-a-half years is an awful long time in football. Remarkably, just one other boss is still managing in the top flight.

Having taken over eight matches into the season after Brendan Rodgers’ sacking, Klopp’s Liverpool were down in 10th place in the Premier League, below the likes of Crystal Palace, Leicester, West Ham, Southampton and Merseyside rivals Everton.

Here, in order of their Premier League position on October 8, 2015, Sportsmail looks back at who Jurgen Klopp’s managerial rivals were when he was appointed, what they have done since and where they are now… 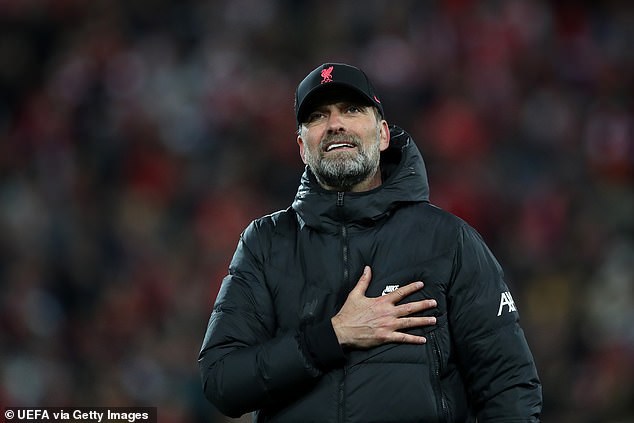 Jurgen Klopp recently extended his Liverpool stay until 2026, having joined in October 2015

Two points clear at the top when Klopp took over, a 4-1 drubbing by Liverpool at the Etihad in November 2015 was the beginning of the end for the Chilean as his side slipped to 10 defeats and finished fourth. Pep Guardiola’s imminent arrival became public knowledge in February 2016 as Liverpool inflicted a 3-0 defeat at Anfield.

After two years in China, Pellegrini returned to the Premier League with West Ham in 2018, finishing 10th in his only full season before being sacked in December 2019. He has been in charge of Real Betis since July 2020, with the Seville side flying high in fifth place in LaLiga and recently winning the Copa del Rey. 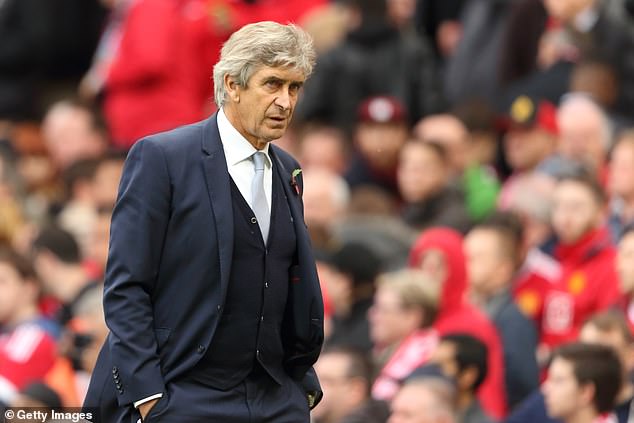 2015-16 would be Wenger’s last Premier League title challenge – and the Gunners really could have won it. Arsenal finished a distant second as their challenge fell apart after winning just four matches from 12 between Christmas and March – and Wenger was gone two years later after consecutive finishes outside the top four.

Wenger has been FIFA’s chief of global development since November 2019, backing controversial plans for a World Cup to take place every two years.

This would be Van Gaal’s second and final season at Old Trafford, as United won the FA Cup but finished outside the top four on goal difference to rivals City.

After five years away from the game, the Dutchman took over as Holland boss for a third time last year and has led them to this year’s World Cup, after which he will retire. He recently revealed he has been battling prostate cancer. 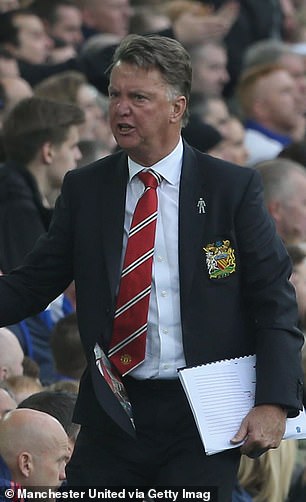 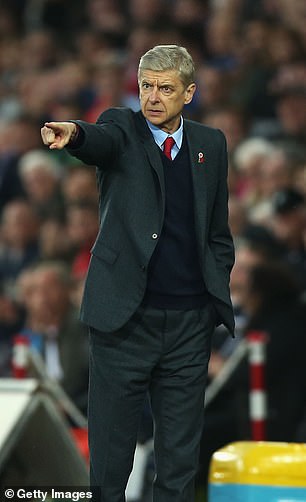 After a brilliant calendar year in 2015, the wheels came off for Pardew and Palace in 2016 as they slumped to finish 15th, lost the FA Cup final to Van Gaal’s United and found themselves in the relegation zone in December 2016 when he was sacked.

Pardew couldn’t save West Brom from Premier League relegation in 2017-18 and is currently managing CSKA Sofia after a spell with ADO Den Haag in Holland.

Incredibly delivered the Premier League title for Leicester – despite being favourites for relegation at the start of the season – as the Foxes built on their good start while all the usual contenders faltered. There was no room for sentiment though at the King Power as Ranieri was sacked in February 2017 with Leicester struggling to juggle playing Champions League and Premier League football.

The 70-year-old Italian has since managed Nantes, Fulham, Roma, Sampdoria and Watford – who sacked him earlier this year. 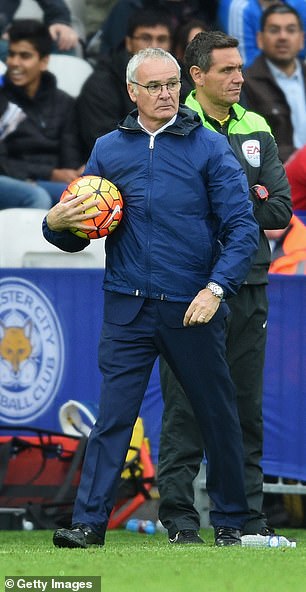 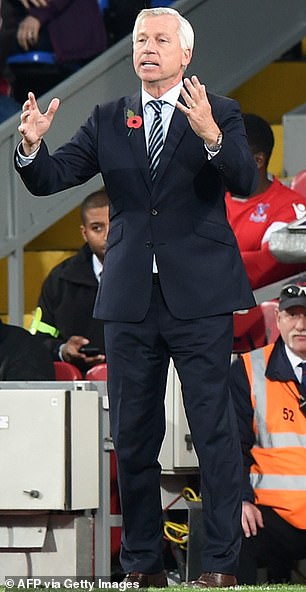 Claudio Ranieri ended the season as a champion, while Alan Pardew’s Crystal Palace fell away

In the Croatian’s first season managing West Ham, the Hammers maintained their form after a strong start and ended up finishing seventh. The following season saw Bilic lead West Ham to 11th before he was sacked in November 2017 after a 4-1 home defeat by Klopp’s Liverpool.

Bilic led West Brom to promotion in 2019-20, but was sacked just a month into their Premier League return. Either side of that he’s had spells in Saudi Arabia and China.

Despite sitting above Liverpool at the time of Klopp’s appointment, Everton had been going in the wrong direction under Martinez since he led them to a fifth-placed finish in his debut season in 2014. The Spaniard was sacked at the end of the 2015-16 season with Everton sitting 12th, having finished 11th the season before.

Martinez got straight back on the horse with Belgium in August 2016 and remains in charge, having led them to a third-placed finish at the 2018 World Cup before a disappointing quarter-final exit at Euro 2020. 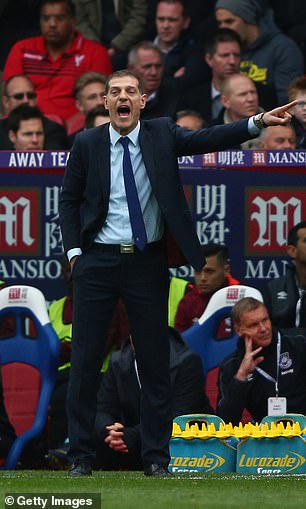 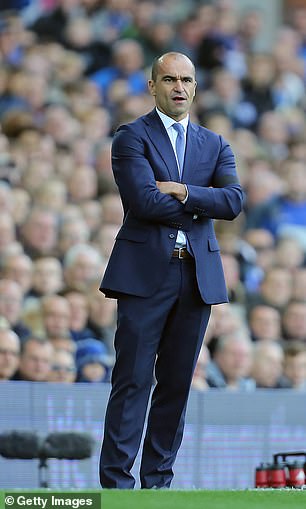 If Arsenal could have won the title in the 2015-16, then Tottenham really should have. Pochettino’s exciting young team looked to have it in their grasp after a six-match winning streak in January and February, before they won just four of their last 11 matches to finish behind the Gunners in third.

Pochettino led Spurs to second in 2017, third again in 2018 and lost to Klopp’s Liverpool in the 2019 Champions League final before he was sacked later that year. Recently led PSG to the Ligue 1 title but is set to be sacked again.

Pochettino’s successor at Southampton enjoyed an impressive two years at St Mary’s, finishing seventh and sixth before being persuaded to take over at Everton. He led the Toffees to a seventh-placed finish in his only full season before being sacked in October 2017 with the club in the relegation zone.

Koeman managed Holland from 2018 to 2020, guiding them to Euro 2020 but leaving to take charge of Barcelona before the tournament finally took place in the summer of 2021. Koeman was sacked by Barca last October and will take charge of Holland again when Van Gaal retires after the World Cup.

Could only lead Liverpool to eighth place in the barmy 2015-16 season, though that owed much to the slow start under Rodgers – and he has transformed the club since. Finished fourth in his first full seasons while also guiding Liverpool to the Champions League final in 2018, before going one better and winning it in 2019.

Won the Premier League in 2020 with 99 points, having finished second with 97 the season before, and is currently battling for the Quadruple having already secured the Carabao Cup and added the FA Cup to his collection in Saturday’s final win over Chelsea. 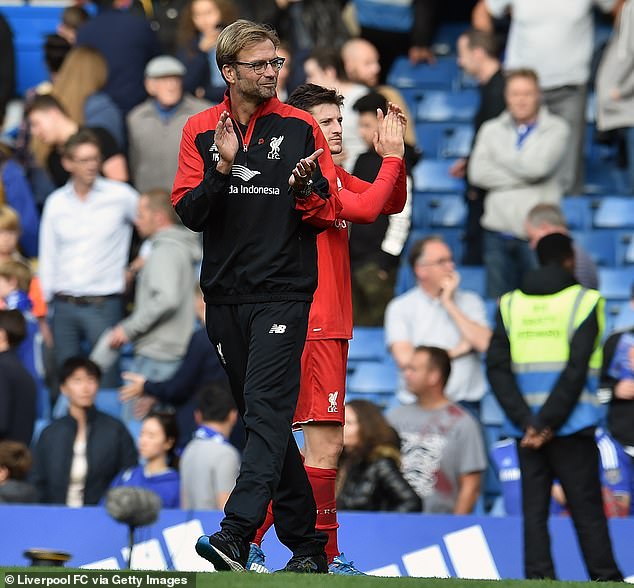 Monk looked to be emerging as one of the best young English managers around at the time Klopp took over, having guided Swansea to safety the previous season before making a strong start to the 2015-16 campaign. Just two months later though, he was sacked by the club after a run of one win in 11 with Swansea down in 15th.

Monk has been out of work since being sacked by Sheffield Wednesday in December 2020, having also managed in the Championship with Leeds, Middlesbrough and Birmingham.

Having taken over in June 2015, Sanchez Flores was sacked a year later despite leading Watford to a 13th-placed finish and FA Cup semi-final.

Watford have had a remarkable nine full-time managers since Klopp took over, including a second spell for the Spaniard in 2019 which lasted just two months. Sanchez Flores had a two-year spell with Espanyol in between and is currently managing Getafe in LaLiga. 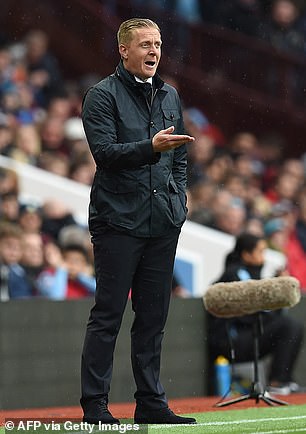 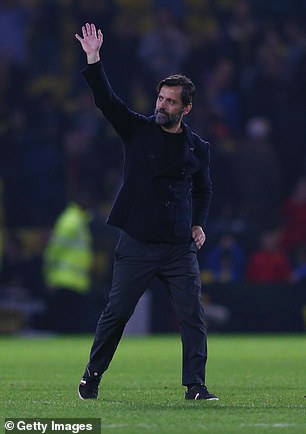 Having led Norwich to promotion via the play-offs in 2015, Neil’s side fell away as the season wore on and they were relegated. He remained in charge until March of the following season, getting sacked with the club eighth in the Championship.

The Scot’s four-year spell at Preston ended in March 2021, before he took over at League One promotion-chasers Sunderland in February.

After a slow start to his third season at Stoke, Hughes guided the Potters to a respectable ninth-placed finish in 2015-16. He would last just 18 months longer, however, getting sacked in January 2018.

Hughes returned to management just two months later, helping guide Southampton to safety at the expense of – you guessed it – Stoke. Hughes, who only lasted at St Mary’s until December 2018 before getting sacked again, recently returned from over three years out as manager of League Two Bradford. 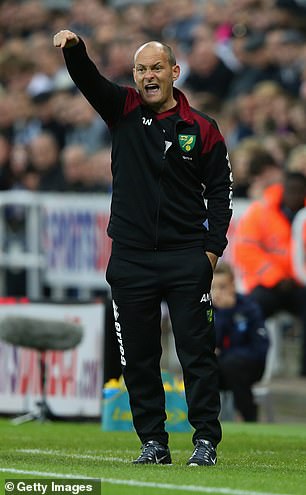 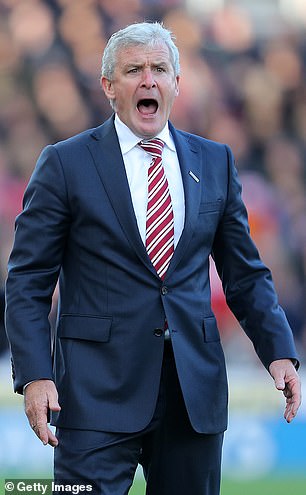 Howe led Bournemouth to the Premier League for the first time in 2015 and steered them to safety with a 16th-placed finish – which was followed by consecutive finishes of ninth, 12th and 14th, before they were relegated in 2019-20 and the Englishman resigned.

Howe returned to management with Newcastle in November – making him the only manager from when Klopp took over to still be in the Premier League – and has enjoyed a fine start to life at St James’ Park. 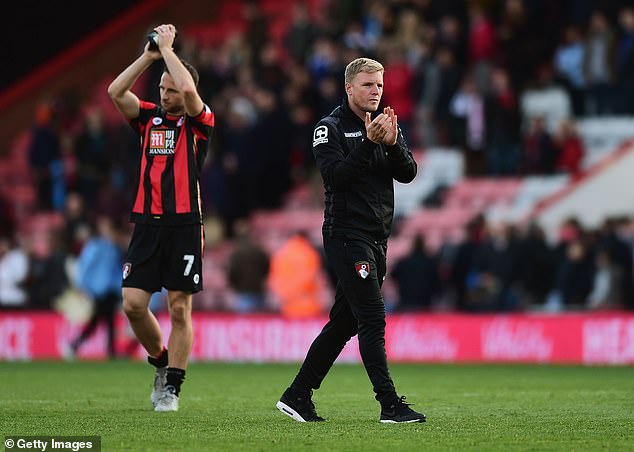 Leicester’s title triumph will always define a basket case 2015-16 season, but closely followed by that was Chelsea’s dismal title defence under Jose Mourinho, which saw the Portuguese boss sacked in December with the Blues still 16th after 16 matches and just one point above the relegation zone.

Mourinho returned the following summer with Manchester United, winning two trophies in a two-and-a-half year spell, before an 18-month stint at Tottenham also ended in the sack. He is now in charge of Roma.

Having saved them from relegation the season before, Pulis led West Brom to 13th in 2015-16 and 10th the year later, before being sacked by the club in November 2017 even though they were above the relegation zone. They would finish 20th.

Pulis has been out of work since December 2020 after spells in the Championship with Sheffield Wednesday and Middlesbrough. 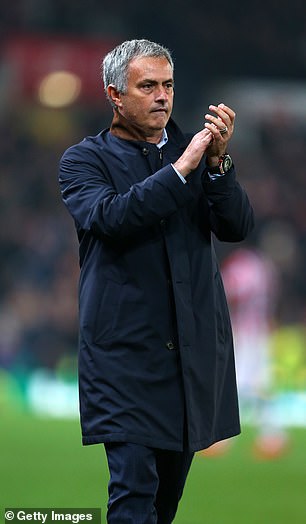 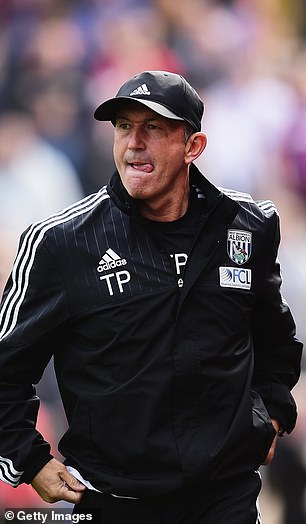 After a dismal start to the season, former Spurs interim boss Sherwood was sacked by Aston Villa just two weeks after Klopp was appointed by Liverpool. Things didn’t improve for Villa, however, who would finish bottom of the league on just 17 points.

Sherwood took over as director of football at Swindon in November 2016, lasting just seven months. He is a regular pundit on TV.

Big Sam took over at Sunderland on October 9, the day after Klopp was appointed by Liverpool. After a slow start, he guided the Black Cats to safety at the expense of North-East rivals Newcastle with a run of just one defeat in their last 11 matches.

That summer, Allardyce was appointed by England but lasted just three months after being caught out in a newspaper sting. He returned to save Crystal Palace from relegation in 2017, before unsuccessful spells at Everton and West Brom.

Newcastle limped on with McClaren at the helm before Mike Ashley finally sacked him in March 2016. Rafa Benitez replaced him on Tyneside but a six-match unbeaten run at the end of the season which saw them collect 12 points proved too little, too late. 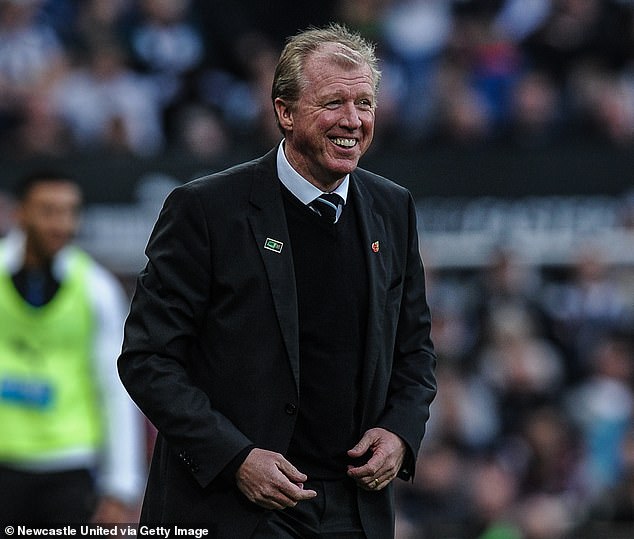