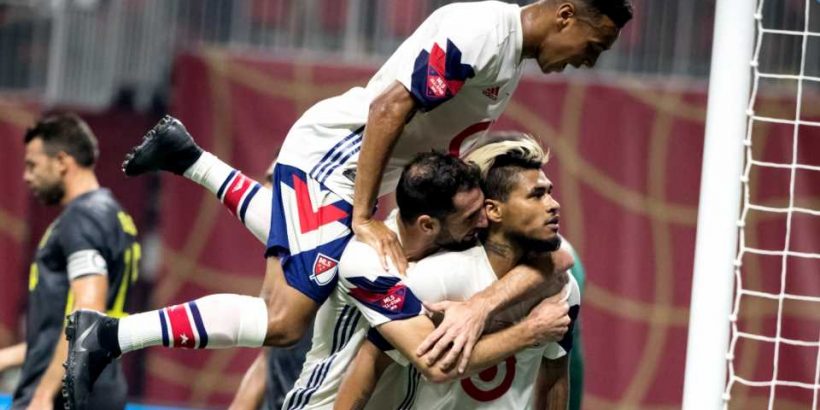 While the debate rages in other American sports about whether their All-Star Game should still exist and in what form, the pro soccer All-Star Game in North America is just hitting its stride.

Major League Soccer did the East-West thing for a few years, but for the past 15 editions of the MLS All-Star Game, the best players in the league have faced off against international opponents, giving the event a different flavor from the traditional American All-Star matchup. And this year it takes on a new, more compelling twist when the MLS All-Stars face the All-Stars from Mexico’s Liga MX for the first time. It’s a matchup that fans have been curious to see for several years and it’s actually happening at Banc of California Stadium in Los Angeles.

What’s the big deal? There’s a serious deep-seated soccer rivalry between the USA and Mexico both on the national team (U.S. have won the past two finals vs. Mexico) and club level (Liga MX has beaten MLS to the Champions League in all 12 editions). After years of domination by the Mexicans on all fronts, the American teams have begun to assert themselves in recent years and the Mexicans don’t like it one bit. That underlying narrative has fueled countless matches and it will be there when the two sets of All-Stars face off Wednesday.

It’s that novelty and competitive edge, which also existed when the MLS All-Stars faced teams such as Manchester United and Arsenal — hey, American soccer is just as good as your soccer, watch us show you — that other pro sports can’t replicate with their All-Star Games despite efforts at changing formats and stakes. It’s one of the chief reasons that the soccer All-Star Game is the best one going.

It’s about more than just a win

Major League Soccer has a chip on its shoulder. The league and its players believe they’re a lot closer in quality to the big leagues and clubs around the world than they’re given credit for. The All-Star Game is a chance for them to prove it.

Many of the international players in MLS have also embraced this attitude and they know what the All-Star Game represents for the perception of the league around the world. It’s a unique opportunity to leave a lasting impression on the visiting coaches and players — both potential subjects of future MLS recruitment attempts — as well as on fans watching from other countries. It’s a veritable international showcase for MLS and the protagonists know it.

The novelty of seeing East-West matchups or other conference-specific All-Star combinations has worn off over the years. It just screams exhibition. But the feeling is very different when the opponent on the other side is coming from overseas. MLS has tapped into that dynamic with unprecedented matchups involving some of the world’s most renowned international clubs.

And the reality is that MLS and its clubs don’t get to measure up against international opponents all that often. Outside of a handful of Champions League matches every year and a few friendlies, the soccer calendar doesn’t allow for the chance to see how the level of play compares. Even if the MLS All-Star team comes together at the last minute and only gets two practices as a squad, the novelty factor of facing the likes of Manchester United or Juventus is appealing for the average American and Canadian fan.

That the Liga MX All-Stars are similarly coming together for the first time should level the playing field this time compared with previous years of seeing the MLS All-Stars take on top clubs that have fine-tuned their game after weeks of high-level training sessions during preseason.

“There’s a sense of pride. You’re representing the league in this rivalry,” U.S. national teamer and MLS All-Star Cristian Roldan (below) said. “For us it’s about pride. What we want to showcase to the fans and the world … how good MLS is. So there’s a sense of pride there. We’ve got to bring it with a bit of intensity.”

Foreign teams want to be there

International clubs have always wanted to be part of the MLS All-Star Game. As one of the marquee events on the North American soccer calendar with a national and global television audience, prospective opponents know that it’s a unique way to grow their brand in a new market. And they know that the brand-building exercise doesn’t happen by just showing up to the game. They also have to perform — and in many cases need to perform or else face criticism back home for falling to a team of All-Stars that isn’t even a real team.

Plus, many of these international players have grown up watching American team sports and have developed a fascination about the All-Star Game. Several soccer stars over the years have spoken about the bucket list desire of experiencing an All-Star event just like the NBA stars they’ve watched over the years. It adds to the dynamic of the match when you have opponents who want to be there and who also are driven to win the game. That’s definitely the case with the MLS-Liga MX rivalry.

The MLS All-Star Game is broadcast around the globe and there are always coaches, scouts and club executives around the world who are watching. Outside of contract bonuses, players in MLS want to be part of the All-Star Game to help put their names on the map and show the soccer world that they’re considered among the elite on this side of the planet, a small step in setting themselves up for a future big-money move abroad.

Some of the names that have played in recent All-Star Games include Tyler Adams (now at RB Leipzig in Germany), Zack Steffen (Manchester City), Miguel Almiron (Newcastle), Michael Murillo (Belgium’s Anderlecht), Alphonso Davies (Bayern Munich, above) and Alberth Elis (Boavista in Portugal and now set for an apparent move to France).

It’s not that their All-Star performances directly contributed to those moves, but the players’ standing as an All-Star of their league definitely serves to legitimize their candidature to join the big clubs in Europe. It can never hurt.

It has a big-event feel

This is the case for every sport’s midseason showcase event. But All-Star Games in soccer are rare: Big names used to come together for special fundraisers once every few years, but the soccer calendar congestion has not allowed for them of late.

The MLS All-Star Game has grown into a welcome reprieve from the bland preseason fare of the summers as European teams get set for the kickoff of their league seasons. These preseason club exhibitions are usually low-key affairs: The fans know they’re tune-up matches, the players often play like they are, and the games pan out just like you’d imagine. But the MLS All-Star Game doesn’t fit this stereotype.

It has a “showtime” atmosphere to it with the marketing, pyrotechnics, cameras, VIPs and musical acts. That mix of ingredients gives the game a different feel for 90 minutes of soccer that actually have no real competitive stakes. And as we’re finding out with the return of fans to soccer stadiums, the energy of a sold-out crowd typically translates into very watchable spectacles on the field.

“I think an All-Star Game is something new to the world [of soccer]. In American sports it’s pretty common, but taking the best players of the league and making a team is pretty special and doesn’t happen very often,” Roldan said. “You want to be part of history at the end of the day. Being part of this year’s All-Star Game and playing against another league’s All-Star team is unheard of and it’s going to be a special event for many players, but also for the fans with the rivalry between Mexico and the U.S.”