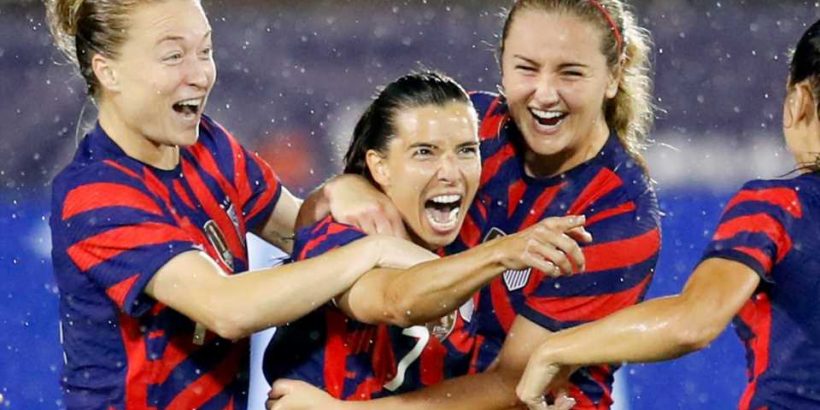 There never will be another moment in United States women’s national team like the one authored in 1999 by Brandi Chastain, beneath a blazing Southern California sun, before a crowd of more than 90,000 at the Rose Bowl and a television audience beyond what anyone had imagined for a women’s soccer game.

It was not her moment alone, of course. So many others had contributed to the process that placed her 12 yards from a game-winning score in the Women’s World Cup that would change how America viewed the Women’s World Cup. But she had to strike that ball past China goalkeeper Gao Hong to secure the championship for the U.S. And she did.

Everything that U.S. women’s soccer has become was built on those few seconds. There had been a World Cup title eight years earlier, but the tournament initially did not bear that name and few in this country even knew it was happening. The 1999 championship made American fans aware, made potential American players aware, even made some distant parts of the soccer-loving, woman-suppressing world aware. Nothing ever can usurp the legacy of Mia Hamm, Kristine Lilly, Michelle Akers and Julie Foudy and their teammates.

Watch: USWNT during the Olympics on fuboTV

Which is not to say their greatness cannot be surpassed. That can happen. And it will, if the current edition of the USWNT is able to add an Olympic gold medal to the Women’s World Cup title secured two years ago, before the pandemic led to the Games being postponed 12 months.

The team featuring Megan Rapinoe, Sam Mewis, Rose Lavelle and Becky Sauerbrunn lacks a cool nickname like “the 99ers”. And, for the moment, they may lack Julie Ertz, the extraordinary defensive midfielder nearing the end of her recovery from a springtime injury that kept her out of all the team’s pre-Olympics prep games. That is about all that is missing from this group, however, which is so deep and talented it struggles – at full strength – to find room on the field for such overwhelmingly gifted players as Christen Press, Lindsey Horan and Carli Lloyd.

Press (below) has scored five goals and recorded four assists in nine starts for the USWNT this year. She has been involved in 37 goals in her last 37 international games. And there’s a chance she will not be a regular starter at this tournament, with veteran Tobin Heath returning to full health.

Horan, a midfielder capable of bossing a game with her ability to cover ground, control the ball and generate scoring opportunities, went to the 2019 Women’s World Cup as the reigning NWSL Most Valuable Player. She started just four of the seven games, opening on the bench in the quarterfinal against France and the final against the Netherlands because coach Jill Ellis preferred Mewis and Lavelle. That also could be the case at the Olympics under new coach Vlatko Andonovski.

Lloyd is a national-team legend though still (extremely) active. She ranks No. 6 on the worldwide women’s career goal-scoring list and No. 3 in national team appearances. She scored the championship-winning goal at two Olympics (2008, 2012) and a hat trick in the 2015 World Cup final. Now 39, she has led the USWNT in assists in this calendar year. But with Alex Morgan back after having her first child in 2020, the starting striker job could be hers.

But not the only ones:

Increasing competition: The 2019 World Cup title was earned against the deepest field in women’s soccer history, and the USWNT’s brutal draw meant powering through an unyielding stretch of exceptional opponents. Starting with the final group game against Sweden, in which the Americans needed at least a draw to win their group, they faced five teams rated 13th or better in a stretch of 17 days: No. 9 Sweden, No. 13 Spain, No. 4 France, No. 3 England and No. 8 Netherlands, which was the reigning European champion.

In large part because of what the 99ers showed the world, more nations are investing more money in promoting and developing women’s soccer. That was most evident in the sizzling USA vs. France and USA vs. England knockout-round games in 2019.

Road work: The 99ers had the advantage of playing that World Cup in the United States, with group games at Giants Stadium in New Jersey, Soldier Field in Chicago and Foxboro Stadium in Massachusetts, then the quarterfinals in the Washington area and the semis at Stanford Stadium in Northern California.

The 2019 squad had to beat France – in France (photo above). USA Today’s Nancy Armour called that “the biggest game in women’s soccer. Ever.”

The sublime Crystal Dunn: Because the U.S. is so deep in attack and midfield, each of the past two coaches has deployed Dunn (below) as the team’s left back. As a club player, she mostly fills attacking positions. She has scored 36 goals and delivered 27 assists in 111 games for such clubs as the Portland Thorns and North Carolina Courage of the NWSL and Chelsea FC in England, and she demonstrates that ability when the occasion permits for the national team. But she also has become a tremendous one-on-one defender with an astute sense of positioning to close down opposing attacks. There is no player quite like her now, nor two decades ago.

Even some 99ers agree. After the U.S. defeated the Netherlands in the 2019 World Cup final, Foudy, now an ESPN analyst, told Sports Illustrated, “I do think this is a team that, across the board, is the best we’ve seen.” Foudy was a core player for the 99ers, an indefatigable midfielder who made 274 appearances and scored 45 goals.

Inside those three years, they built the model for every iteration of the USWNT that followed.

This is the chance, though, for the 2019 world champions to become something more.