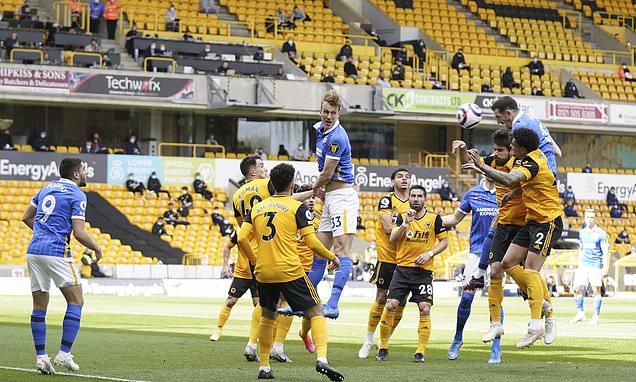 Wolves vs Brighton LIVE: Graham Potter’s side can guarantee their Premier League status with a win at Molineux… with Nuno’s men looking to bounce back at home after drubbing against Burnley two weeks ago

Brighton can guarantee their Premier League status for another season with a victory at Wolves in the midday kick-off on Sunday.

The Seagulls are currently 10 points clear of Fulham in 18th place with four matches remaining and so a victory would see Graham Potter’s side achieve their goal of top-flight football for 2021-22.

Nuno Espirito Santo’s Wolves, meanwhile, are in 12th place and are looking to get back to winning ways following a draw at West Brom and a 4-0 loss at home to Burnley preceding that.

Sportsmail’s ALEX BOWMER will provide live coverage of Wolves vs Brighton, including all the build-up, team news and in-game updates.

Danny Welbeck zooms past Conor Coady to chase an enticing ball over the top, but he can’t get his touch right and the ball goes behind.

Leandro Trossard clips a ball over the top for Danny Welbeck, whose knock-back for the arriving Neal Maupay is fired over on the half-volley by the Frenchman. Brighton are looking so confident.

Conor Coady puts it behind from Alireza Jahanbakhsh’s cross. Pascal Gross then swings yet another sumtuous delivery and Lewis Dunk rises highest once more, with Rui Patricio brilliantly clawing behind the Brighton captain’s header! Almost Dunk’s second of the afternoon.

The visitors then win another corner, with Dan Burn this time forcing Patricio into a save (albeit a comfortable one).

Ben White fires the ball into Danny Welbeck’s feet, but the forward cannot then lay it off to Yves Bissouma on the edge of the box. Brighton have really impressed after the early Wolves dominance.

Brighton win another corner after Ki-Jana Hoever puts the ball behind. Pascal Gross’ delivery is again dangerous and Dan Burn looks pleadingly at referee Jon Moss after being wrestled to the ground by Morgan Gibbs-White, making his feelings known to the man in the middle after the phase of play ends. He’s got a point.

Pascal Gross’ delivery is perfect and Lewis Dunk rises highest to power home a header! Dunk scored the equaliser to make it 3-3 in the reverse fixture and the Englishman is on hand again.

Brighton build pressure in Wolves territory, knocking it about confidently. Alireza Jahanbakhsh slips in Leandro Trossard, whose cross is cleared. Jahanbakhsh then regains possession and wins a corner after his ball in is put behind.

Alireza Jahanbakhsh plays the ball behind in the hope that Danny Welbeck would latch onto it, but the former Arsenal man wanted the pass to feet and the chance is lost.

Fabio Silva harries Lewis Dunk into conceding a corner. Brighton do well to clear the danger, but the hosts win another throw. An encouraging start by Nuno Espirito Santo’s men, who don’t usually begin games brightly.

Rayan Ait-Nouri charges down the left wing and squares for Vitinha, whose shot across Robert Sanchez is tipped behind. The resulting corner is knocked behind by Ruben Neves.

Wolves win a couple of throw-ins early on.

The players take the knee – and we’re underway!

The teams are out and we’re just about ready to go.

There is a reasonable chance that could happen today, with Wolves’ last match at Molineux resulting in a 4-0 thrashing at the hands of Burnley. 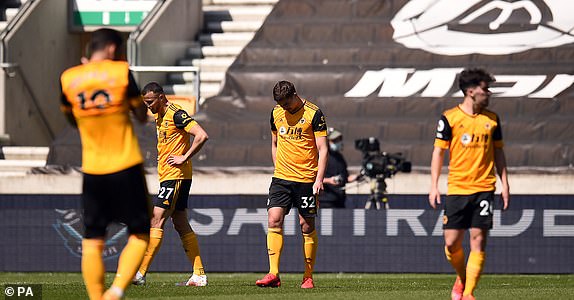 The reverse fixture between these sides produced an entertaining 3-3 draw at the Amex back in January, with Brighton coming from 3-1 down to snatch a point thanks to a Neal Maupay penalty and a Lewis Dunk header. 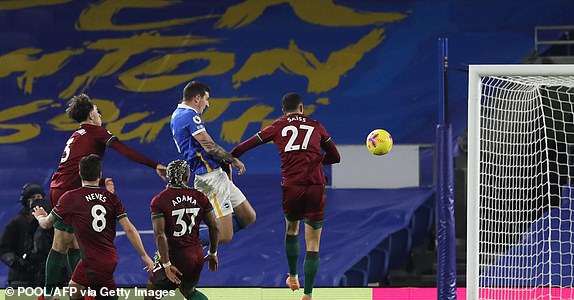 Graham Potter makes just one change following last weekend’s 2-0 win over Leeds as Alireza Jahanbakhsh replaces Joel Veltman, who is not in the squad.

Nuno Espirito Santo makes five changes from the side that drew 1-1 at West Brom on Monday.

Kilman makes his first start since February 7, while Gibbs-White starts a league game for the club for the first time since January 12.