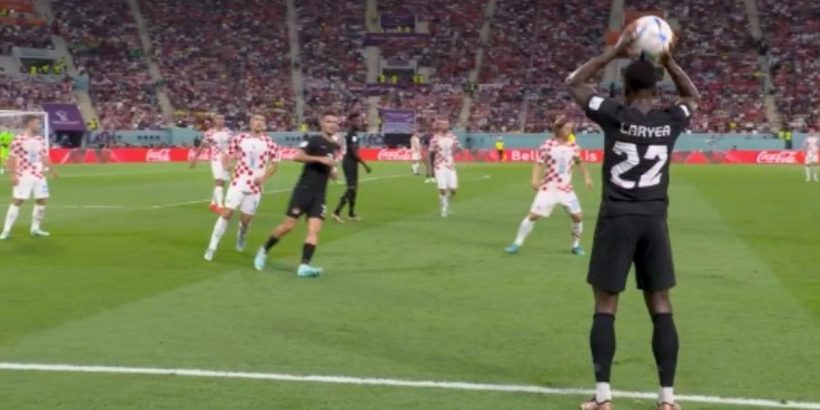 Following their lion-hearted display against Belgium earlier in the week all eyes were on Canada during their World Cup clash with Croatia today … which was bad news for Canadian defender Richie Laryea.

The Nottingham Forest man, currently on loan at Toronto FC, became an instant meme after his agonisingly atrocious foul throw was beamed to millions of homes around the world.

After standing awkwardly on the touchline like someone waiting for their only friend at the party to get back from the toilet, Laryea dropped the ball in front of him, with his arms well past his head, as team-mate Cyle Larin ran by.

Several Croatian players threw their hands up in protest and referee Andres Matonte immediately turned the ball over, and all Laryea could do in response was glance sheepishly into space.

Fans on social media labelled it "the worst foul throw" in the history of the game, with user stunned that the BBC commentary team failed to pick up on it.

Should professional footballers be docked a days' pay for committing foul throws? Let us know in the comments section below.

"How have the commentators not picked up on that?? The worst foul throw I’ve ever seen," he tweeted, while another fan wrote: "Have you ever seen a worse throw in in football history than that?"

Canada made the perfect start to the match after Bayern Munich sensation Alphonso Davies powered home a bullet header after just two minutes, but the North Americans were begged back when former Leicester City star Andrej Kramaric equalised for Croatia.

Marko Livaja grabbed Croatia's second right on half-time before Kramaric sealed Canada's fate by adding a third on 70 minutes. Lovro Majer then added a fourth in injury time after the Canadians threw everyone forward in search of an unlikely comeback.