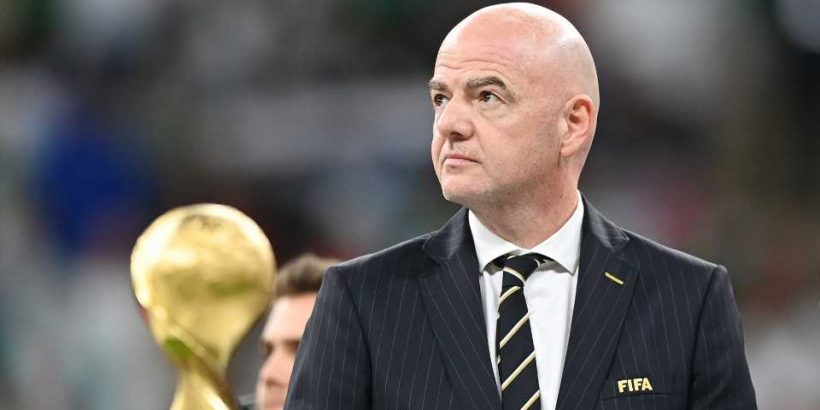 FIFA president Gianni Infantino has suggested that a biennial World Cup could stop African migrants from “dying in the sea” in a controversial speech at the Assembly of the Council of Europe. He later walked back his comments slightly, distancing his suggestion from the two-year World Cup proposal.

Infantino has been pushing his hotly-debated Future of Football project for many months now, with former Arsenal manager Arsène Wenger leading the initiative that has proposed the staging of a World Cup every two years rather than four.

The plans have been widely rejected by European and political organisations, but Infantino remains undeterred and is now claiming that the change is crucial for the future of the game in African countries.

What did Infantino say?

Infantino has risked a backlash by suggesting that World Cup growth could prevent African migrants from risking their lives to gain entry into Europe in search of “opportunities”.

The 51-year-old told the parliamentary assembly in Strasbourg: “This topic is not about whether we want a World Cup every two years, but about what do we want to do for the future of football.

“We need to find ways to include the whole world to give hope to Africans so that they don’t need to cross the Mediterranean in order to find maybe a better life but, more probably, death in the sea. We need to give opportunities, to give dignity. Not by charity but by allowing the rest of the world to participate. Maybe the World Cup every two years is not the answer. We discuss it.”

Infantino then attempted to walk back his quote via FIFA’s official social media accounts, standing by the original claim but attempting to distance his comments from the idea of a biennial World Cup.

“Given that certain remarks made by me before the Council of Europe earlier today appear to have been misinterpreted and taken out of context,” Infantino said through a statement, “I wish to clarify that, in my speech, my more general message was that everyone in a decision-making position has a responsibility to help improve the situation of people around the world. If there are more opportunities available, including in Africa, but certainly not limited to that continent, this should allow people to take these opportunities in their own countries. This was a general comment, which was not directly related to the possibility of playing a FIFA World Cup every two years.”

What was the reaction to Infantino’s comments?

The most notable reaction from Infantino’s odd suggestion came from English equality and racism watchdog Kick It Out.

Kick It Out chief executive Tony Burnett released a reactionary statement, saying, “FIFA is a multi-billion profit-making organisation. They already have the funds to invest in creating and inspiring opportunity for disadvantaged people around the world. It is therefore completely unacceptable to suggest that a biennial World Cup, predominantly set up to drive further profits for FIFA, could be a solution for migrants who risk their lives, sometimes fleeing war-torn countries, to seek a better life.”

Opposition to a biennial World Cup

Infantino, Wenger and former FIFA president Sepp Blatter have all spoken passionately about the potential benefits of holding the World Cup on a more regular basis, but their plans have not been well received by the football community.

The Football Supporters Europe [FSE] organisation has declared “we do not want or need more World Cups” while UEFA president Aleksander Ceferin has warned that European football’s main governing body and CONMEBOL could boycott future tournaments.

A number of active footballers have also spoken out to condemn the proposal, including Real Madrid goalkeeper Thibaut Courtois.

“You hear that they want to put a European Championship and a World Cup every year,” he told Sky Sports in October. “When will we get a rest? Never. So, in the end, top players will get injured all the time and that’s the end of it.

“It’s something that should be much better and better-taken care of. We’re not robots.”