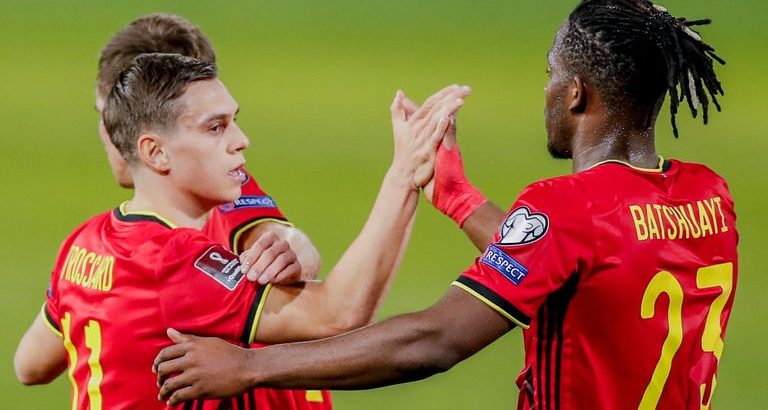 Belgium’s second-string used the opportunity of a rare start to impress coach Roberto Martinez as they thumped Belarus 8-0 in their World Cup Qualifier on Tuesday.

With Martinez warning players were under scrutiny for places in the Euro 2020 squad, Michy Batshuayi, Hans Vanaken (2), Leandro Trossard (2), Jeremy Doku, Dennis Praet and Christian Benteke all scored as Kevin De Bruyne, Romelu Lukaku and Dries Mertens were given the night off.

It lifted Belgium to seven points from their opening trio of matches in Group E, while Belarus suffered their first defeat after opening their qualifying bid with a 4-2 win over Estonia at the weekend.

Belgium, top of the FIFA rankings, were 4-0 up at half-time at Den Dreef as they inflicted Belarus’ heaviest ever defeat.

Elsewhere in Group E, Dan James’ late header gave Wales a vital 1-0 victory against the Czech Republic as both sides ended the game with 10 men in Cardiff.

Wales missed the best chance of the first half with a rare attack as Gareth Bale’s close-range effort was tipped over by Tomas Vaclik, but the hosts gained a numerical advantage after the break as Patrik Schick was sent off for raising his hand to Connor Roberts following a tussle in the box.

Roberts was then dismissed for a second booking, having received the first in the incident with Schick, but Wales played their best football thereafter, and got the winner as Bale’s superb, wicked cross was headed home brilliantly by James for his fourth Wales goal (81).

Joe Rodon denied Ondrej Celustka a nailed-on equaliser in stoppage time with a sensational block in the penalty area, and Wales held on for their first win of the campaign, leaving them third, a point behind the Czechs having played one game fewer.

Netherlands’ winger Steven Berghuis scored one goal and set up another as they overcame a wasteful first half to thump minnows Gibraltar 7-0.

Substitute Donny van de Beek added a sixth late on and Depay got his second as the Netherlands recorded their biggest away win since a 7-0 success over San Marino in 1993. 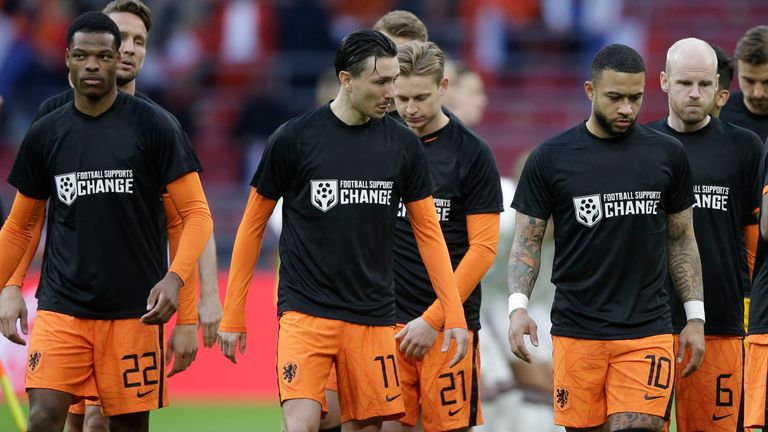 Before the match, the Dutch players again wore t-shirts designed to highlight the plight of migrant workers in Qatar, who host the next World Cup, joining similar protests made by Norway and Germany players at previous games.

The Dutch moved into second place in Group G with six points from three games, one point behind leaders Turkey who were surprisingly held to a 3-3 draw at home by Latvia.

Turkey went up 2-0 in just over half an hour thanks to goals from Kenan Karaman and Hakan Calhanoglu before Roberts Savalnieks pulled a goal back. Burak Yilmaz restored Turkey’s two-goal lead from the penalty spot before Roberts Uldrikis and Davis Ikaunieks rescued a point for Latvia.

Norway were also 1-0 winners against Montenegro. Alexander Sorloth scored his second goal in three games to secure the win.

Cristiano Ronaldo scored his first goal in this World Cup Qualifying campaign but then inexplicably missed a sitter as Portugal were forced to come from behind to beat Luxembourg 3-1.

Luxembourg went into the game full of confidence after winning 1-0 against the Republic of Ireland and they took a shock lead against the European champions when Portuguese-born Gerson Rodrigues, who scored against Ireland, glanced in a header on the half-hour mark.

Portugal went close to levelling on two occasions before Diogo Jota headed in their equaliser in the second minute of added time at the end of the first half.

Ronaldo, who had been denied a goal in the 2-2 draw against Serbia on Saturday despite the ball clearly crossing the line, put Portugal in charge early in the second half, firing into the far bottom corner after combining with Joao Cancelo. 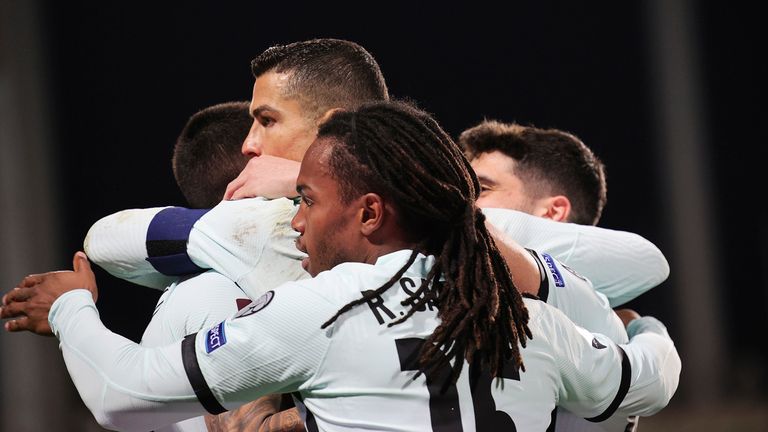 Ronaldo should have scored again later in the half when the ball landed at his feet following a terrible Luxembourg backpass but Portugal’s all-time top scorer shot straight at Anthony Moris, who saved the striker’s second attempt immediately after with his feet.

Substitute Joao Palhinha put Fernando Santos’s side further ahead in the 80th minute by heading home a Pedro Neto corner, also scoring for the first time for his country, while the visitors’ task got easier when Luxembourg’s Maxime Chanot was sent off for a second booking in the 87th.

The victory lifted Portugal to the top of Group A on seven points after three games, level with Serbia, while Luxembourg are third with three points.

Earlier in the day, Serbia were 2-1 winners against Azerbaijan. 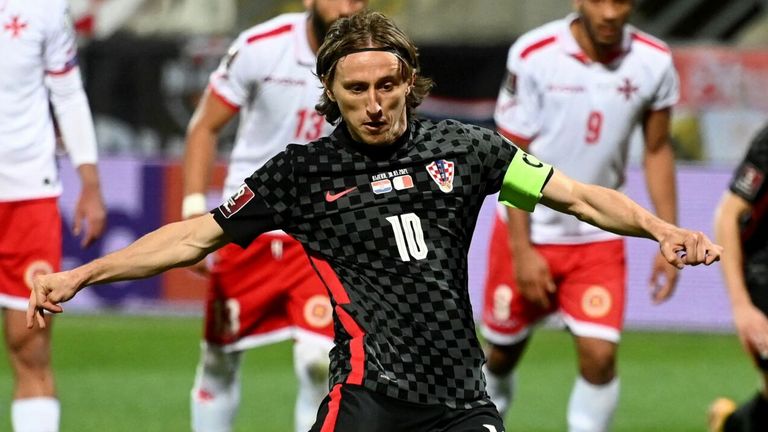 The Group H result lifted 2018 World Cup runners-up Croatia to the top of the standings on six points from three games, ahead of Russia on goal difference, after the Russians suffered a 2-1 defeat at third-placed Slovakia, who have five points.

Croatia laid siege to the Maltese area in the first half and created two early chances as Nikola Vlasic shot wide from 10 metres while Mario Pasalic’s 14th-minute header hit the top of the crossbar.

Modric and Perisic, who started on the bench after their exertions in Croatia’s opening two games, made a decisive impact after coach Zlatko Dalic threw them on shortly after the break as the home side struggled to carve out the supply routes. 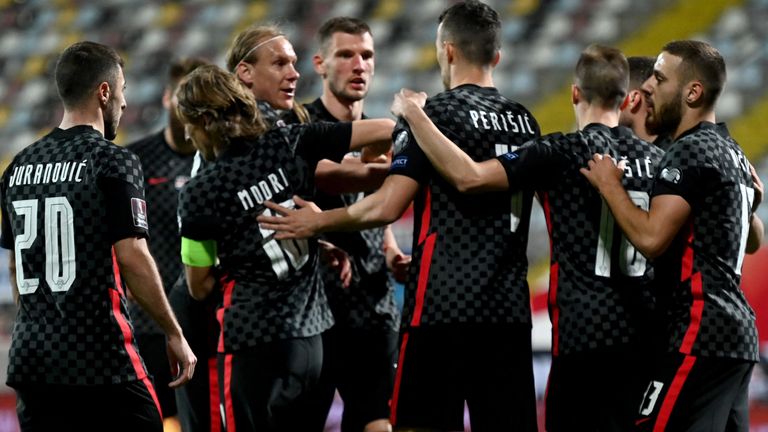 Perisic broke the deadlock with a close-range finish in the 62nd minute when he turned in a cross by fellow substitute Borna Barisic and Modric made it 2-0 with a 76th-minute penalty after Kyrian Nwoko handled a Mislav Orsic corner.

Brekalo added the third in the 90th minute with a simple tap-in after Perisic raced clear down the left flank and squared a perfect pass to the wing back.

Robert Mak set up a goal and then scored the winner as Slovakia edged Russia 2-1, ending the Russians winning start to World Cup Qualifying.

Slovenia’s hopes of qualifying looked bright after beating Croatia last week but now are fading fast after a surprise 1-0 loss to Cyprus. The hosts scored against the run of play in the 42nd minute when Ioannis Pittas fired low past Jan Oblak. Cyprus defended deep and held on for only their second win in 14 games.