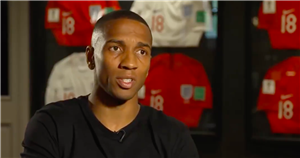 Ashley Young has said he "made the right decision" in leaving Manchester United back in January 2020 to join Inter Milan.

Young was United's club captain at the time but, with his contract due to expire at the end of the season, he had been able to negotiate a pre-contract agreement with Inter.

However, the Serie A side wanted him to join in January and The Sun claimed at the time that Young had sat down with manager Ole Gunnar Solskjaer to discuss his future.

Young is said to have informed Solskjaer of his desire to join Inter in January and, 24 hours after the meeting, the report claimed that the defender 'marched off' the training pitch at Carrington in an attempt to push through the move.

United ended up agreeing a reported £1.3m deal with Inter days later and Young has gone on to help Antonio Conte's side win the Serie A title for the first time in 11 years.

He has become the first Englishman to win both the Premier League and Serie A and he has called his decision to join Inter "the best one I made."

Speaking to Sky Sports, Young said: "It's obviously nice to win the Premier League and then to go to a new league and win that as well is just incredible, an unbelievable feeling.

"It's never easy to leave a club in January, but I'm looking back now and I think I made the right decision. I always wanted to go out and win. I've got that ambition, drive and desire to win.

"Obviously the first season we got to the Europa League final which unfortunately we lost. We also lost the league by one point and I think that might have spurred us on for this season to go out and get ourselves a trophy and win Serie A.

"Going out there and making that decision, I think it was the best one I made."