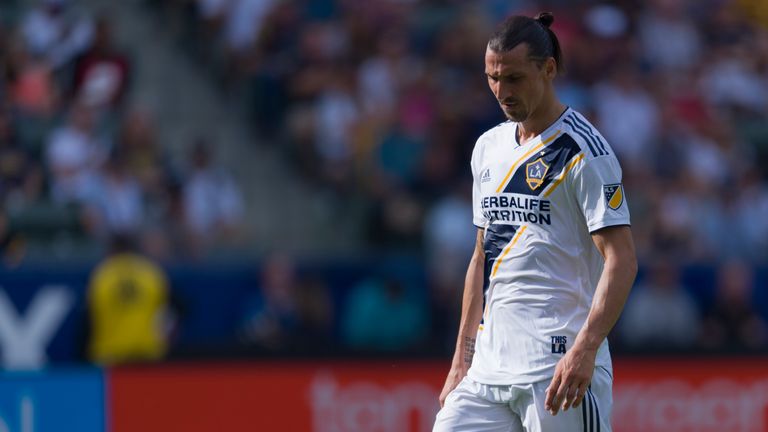 Zlatan Ibrahimovic’s LA Galaxy failed to qualify for the MLS play-offs after blowing a 2-0 lead to lose 3-2 to Houston Dynamo on the final day of the regular season.

Needing to win to secure their place in the play-offs, Galaxy looked to be on track as Ola Kamara scored twice in three minutes in the first half.

However, Romell Quioto pulled a goal back for Houston after half-time and then Mauro Manotas scored twice to turn the game around.

Defeat means Galaxy finish one point outside the play-off places in the Western Conference.

New York Red Bulls won the Supporter’s Shield for the best regular-season record as they finished with a 1-0 win over Orlando City.

Derrick Etienne scored the only goal in the 53rd minute, atoning for an earlier penalty miss, as Red Bulls won their fifth straight game to reach 71 points, becoming the first team to ever crack 70 points in the regular season.

Atlanta arrived at BMO Field with a one-point edge over New York in the MLS overall standings, but were well beaten by Toronto, for whom Sebastian Giovinco and Marky Delgado also scored.

Josef Martinez scored his MLS-record 31st goal for Atlanta, converting a penalty in the 76th minute.

Alphonso Davies put on one last show for Vancouver fans, scoring twice in the Whitecaps‘ 2-1 victory over the Portland Timbers.

Davies is joining Bayern Munich in a $22m deal after finishing the season with eight goals and 11 assists.

Diego Fagundez scored a milestone goal in the 74th minute to give the New England Revolution a 1-0 victory over Montreal, keeping the Impact out of the play-offs.

The 23-year-old’s ninth goal of the season saw him become the youngest player in MLS history to reach 50 career goals.

New England head into the play-offs as the sixth seed in the Eastern Conference and play third-seeded New York City FC on Wednesday or Thursday in the Knockout Round.

Western Conference champions Sporting KC will get a Knockout Round bye, hosting their first home play-off game since 2015, while LAFC will be third seeds after a strong inaugural season.