Rafael Nadal has offered some sympathy for world No.1 Novak Djokovic after his great rival's shock default from the US Open for hitting a lineswoman in the throat with a stray ball. 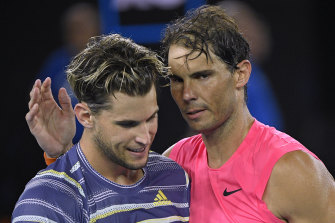 Nadal, right, congratulates Thiem after their quarter-final showdown in Melbourne in January.Credit:AP

With Nadal absent, Serbian Djokovic was a huge favourite to win the title in New York but his run came to a sudden end in the fourth round against Pablo Carreno Busta when he accidentally hit the official with a ball after losing a point.

Had Djokovic won the title he would have moved to 18 grand slam titles, one behind Nadal and two behind Roger Federer in the battle for all-time greatness.

"The consequences have been always the same. Nothing new on that. Novak was unlucky. The rules says clearly that's a default," Nadal said in a news conference at the Rome Masters where he will resume his season this week after a seven-month hiatus caused by the COVID-19 pandemic.

"Sorry for him. He had an opportunity there. But in some way you should not be doing this. It's very unfortunate, very unlucky situation. But it's important to have the right self-control on the court, because if not, you can be unlucky."

Nadal was one of several players to opt out of playing at the US Open because of his concerns about travelling during the pandemic.

Austrian Dominic Thiem, the man Nadal beat to win the last two French Opens, claimed his first grand slam title at Flushing Meadows, coming back from two sets down to beat Alexander Zverev in a gripping final on Arthur Ashe Stadium on Sunday.

Thiem's victory ended a run of 13 grand slam titles won by either Nadal, Djokovic or Federer and made him the first new major winner since Marin Cilic in 2014.

"Happy for Dominic. He is somebody that deserves to win a big title, super hard worker. Very focused on his goals. Good person, good human person. He deserves it," said Nadal, who will be aiming to win a record-extending 13th French Open when the re-scheduled claycourt event starts at the end of September.

Nadal will open in Rome against Carreno Busta.

Federer will not play in Paris, having had knee surgery early in the pandemic. He plans to return in Melbourne in January.

Djokovic congratulated Thiem on his achievement in New York, and praised the sportsmanship of Thiem and Zverev.

"This is what sport is all about," Djokovic wrote on Instagram. "Respect, appreciation and friendship. Regardless of the rivalry these two guys have and the amazing battle they had yesterday, they still showed big heart and inspired many tennis players.

"Thank you both Domi and Sasha for standing strong for your character values and seeing always what matters the most – love and respect for each other. Congratulations to both of you for the great achievement and fantastic match you gave to the tennis world."