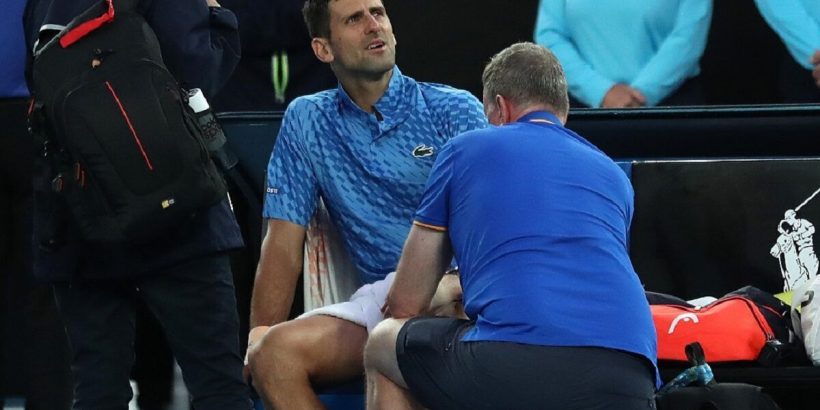 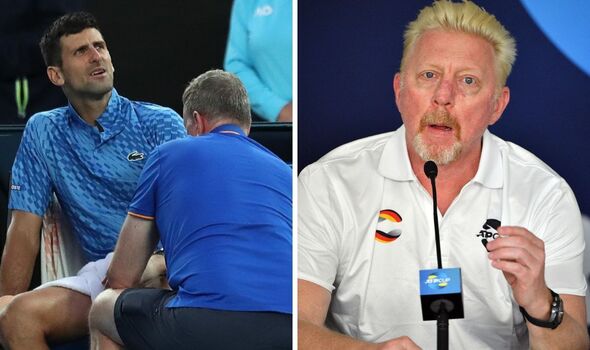 Boris Becker has jumped to defend his former charge Novak Djokovic following suggestions that the world No 5 could be faking his injury at the Australian Open. The nine-time champion in Melbourne has been carrying a hamstring issue for two weeks but is still managing to come through his matches, though Becker shut down suggestions that Djokovic was physically fine despite admitting that it could appear as though he was “bluffing”.

Djokovic’s run to a record 10th Australian Open title has come with more hurdles than initially expected, as the 35-year-old continues to battle with a hamstring injury he picked up in the Adelaide International semi-final two weeks ago. The fourth seed safely made it to the second week in Melbourne but has needed multiple medical time outs and hasn’t shied away from admitting that his thigh was “not good at all”.

There have been underlying concerns over the injury and whether it could stop the Serb’s run during all of his matches but he has managed to get through three rounds by dropping just one set, leading some to question just how serious his physical problem is if he can continue to win with ease. But Djokovic’s former coach Becker was quick to respond to the accusations, claiming that he knew 21-time Grand Slam champion was struggling.

“I’ve known him for a long time and I know that he has problems with his thigh,” the retired pro told Eurosport. “Novak can grit his teeth when it comes to important points, but he also lets it go in less important moments.”

JUST IN: Emma Raducanu can learn from Jelena Ostapenko as Latvian upsets Gauff

While the six-time Grand Slam champion knew that it could appear as though Djokovic was putting on an act, he doubled down on his defence of the world No 5 and admitted that he wouldn’t do something like that. “Sometimes you think he’s bluffing or can’t finish the game,” he added.

“It’s a bit of heaven and hell. That also makes it difficult for the opponent. But Novak wouldn’t behave like that if he had nothing.” Becker’s comments come after Djokovic dispatched 27th seed Grigor Dimitrov in three sets on Saturday.

Many thought the Bulgarian could pose a real threat to a hindered Djokovic given Dimitrov’s form so far in the tournament but he went down 7-6(7) 6-3 6-4. But Becker claimed that the Serb’s decision to play quicker given his injury could have helped him against the former world No 3.

He explained: “Novak is now going for the quick points. That starts with the serve, because he’s also taking more risks on the second [serve]. In the rallies he tried to dominate with his forehand. It was an interesting match, with ups and downs.

“Dimitrov had what it takes to beat Djokovic, but he [Djokovic] was better in the decisive moments.” The fourth seed will now face home hope Alex de Minaur in his round-of-16 match and assured fans that he would continue to take things match by match, adding: “ I don’t know what awaits, but I do hope and I have faith for the best.”