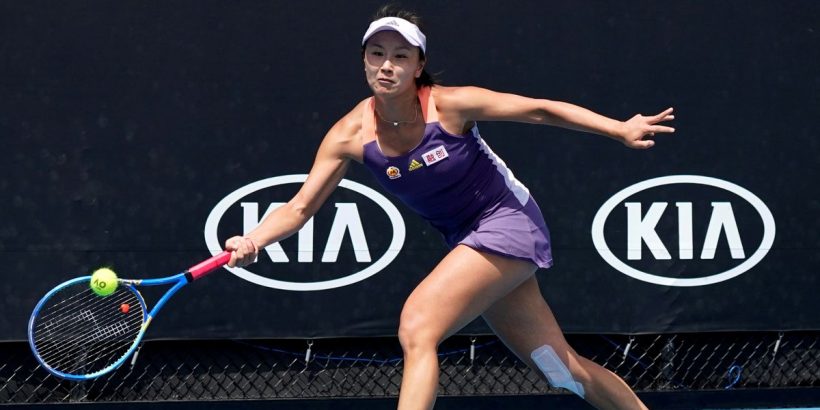 China's foreign ministry has condemned unnamed people of "malicious hyping" regarding the whereabouts of Peng Shuai after her sexual abuse allegation.

The 35-year-old has not been seen in public after accusing the former Chinese Communist Party vice premier Zhang Gaoli of sexual assault on November 2 on social media site Weibo.

Concerns have grown over her safety and whereabouts, with many leading figures within tennis, including Novak Djokovic, Andy Murray and Serena Williams expressing worries.

Some countries are reportedly weighing up whether to boycott the Beijing Winter Games next February. Furthermore, recent assurances by Chinese authorities that Peng is safe and well have been met with doubt, with the Women's Tennis Association (WTA) among those.

Before this, he had posted two clips of the 2013 Wimbledon doubles champion allegedly having dinner in Beijing last Saturday too.

And most recently, the International Olympic Committee (IOC) – specifically president Thomas Bach – held a 30-minute video call with Shuai in which said she was "safe and well" but all of the above has done little to quell the concerns over her wellbeing as she has still yet to be seen in public.

And now China's foreign ministry has responded to questions in the west over her safety, accusing unnamed people of "malicious hyping".

"This is not a diplomatic matter", the Chinese foreign ministry spokesperson, Zhao Lijian, said during a press briefing on Tuesday.

"I believe everyone will have seen she has recently attended some public activities and also held a video call with the IOC [International Olympic Committee] president, [Thomas] Bach. I hope certain people will cease malicious hyping, let alone politicisation."

The former French Open and Wimbledon women's double champion has not been seen in person since writing a lengthy message on Weibo in which she alleged 75-year-old Gaoli of sexual assault.

In the November 2 post, Peng alleged she had an on-off-extra marital affair with Zhang for several years before he cut ties with her as he rose through the ranks in China's Communist Party.

Several years later, Peng claims, Zhang invited her to his and his wife's house to play tennis, which is when Peng alleges she was sexually assaulted by Zhang.

The post was quickly removed from Weibo, as was all of Shuai's recent activity on the popular Chinese social media platform.

Since the post, an email, signed by her, claimed she was safe and the allegation had been made up – but the WTA raised doubts over the validity of the statement attributed to her at the time, and have continued to express their concerns.

Chinese state-affiliated media outlet CGTN released on Twitter what it said was an email sent by Peng, which read: "I'm not missing, nor am I unsafe. I've just been resting at home and everything is fine."

Ghaoli has not responded to Peng's allegation.