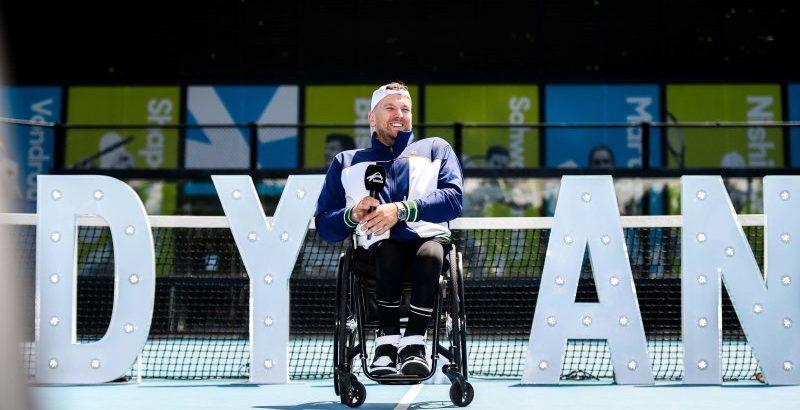 Dylan Alcott will farewell his professional wheelchair tennis career at Melbourne Park on Thursday. The 31-year-old has a chance to win an eighth and final Australian Open quad singles title, coming up against Dutchman Sam Schroder, one of only two players to defeat the Australian in a wheelchair final at the majors, at the 2020 US Open.

Tennis Australia’s national high-performance wheelchair coach, Francois Vogelsberger, has been by Alcott’s side for the past seven years, since the Melburnian came back to the sport of his youth after a stint playing wheelchair basketball. 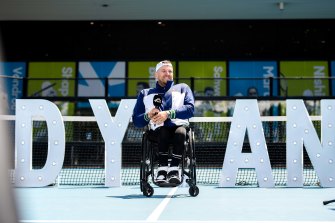 “He’s been putting in the hard yards. Since almost from day one when we started together in 2014 and have never stopped since – gym session, pushing session, tennis session – he gives 100 per cent.

“He has a growth mindset – always strives to be a better tennis player, also a better person.”

Here, Vogelsberger explains how Alcott has stayed ahead of pack.

“His serve is a big weapon – power, speed but also curve,” said Vogelsberger.

“If you see the able-bodied players, they use a lot of the legs to create the momentum [for the kick serve]. In wheelchair tennis it’s way harder and the kick serve doesn’t have enough pace and gives your opponent too much time.

“With Dylan … he can put it out wide. Like you saw against [left-hander] Andy Lapthorne [in his semi-final], it was one of the tactics to start really wide on Andy’s backhand.

“He can do also the left one where the ball arrives, for example, on Andy’s forehand and curve back into the body.

“It’s very accurate, which he does with the flat serve as well.”

Ashleigh Barty is renowned for her backhand slice – Jim Courier said this week Barty’s key weapon was reminiscent of Roger Federer – but for Alcott, he has added the forehand version to his armory.

“When he started his forehand was his weakness, but he’s been working a lot on it,” Vogelsberger said.

“He used to use the slice forehand as a ‘safety mode’ [a defensive option] back in the days, and now he uses it as a weapon.

“You can keep the ball lower, the ball is travelling sideways [a sidespin shot] … compared to the topspin backhand – then the ball will go high.

“One of the reasons I think is because they are lower on the ground and are more likely to hit the ball high.

Vogelsberger is also a big fan of Alcott’s cross-court backhand.

“[And the] backhand topspin – the inverted backhand with a semi-western grip,” he said.

“Those guys hit a lot of balls above their head, so this grip allows them to generate more topspin and pace as well.”

“He’s working extremely hard at the gym [and] pushing sessions. To be honest he’s had very, very few injuries. Which I think is amazing after those seven years. We don’t exactly know how that happened, but it happened. Good for us.” 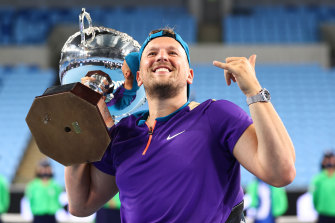 Vogelsberger said the time away playing a team sport was ideal for him.

“He’s been playing basketball, so that had a massive positive impact on his fitness, and his recovery,” he said.

Vogelsberger says one of the main challenges for wheelchair athletes is building momentum in a point, especially after serving.

“What is making him very strong is he never stops on the tennis court.

“You start from a still position, you serve, the second shot after the serve you’re not moving too fast because you come out from the serve.

“But after that second shot you start moving the chair and you never stop. What is hard in wheelchair tennis is that first or second push to bring the chair to momentum, but when the momentum is there and you carry the momentum through the shot and to prepare the next shot, then everything is easier.

Alcott’s capacity to solve problems on the court was tested when he went a set down against another Dutchman, Niels Vink, this week.

“[It was] not his best match in regards to the quality of tennis he played,” Vogelsberger said.

“There’s a lot of pressure, a lot of spectators and he managed to dig deep, to find a way.

“He finds a way to make it happen.”