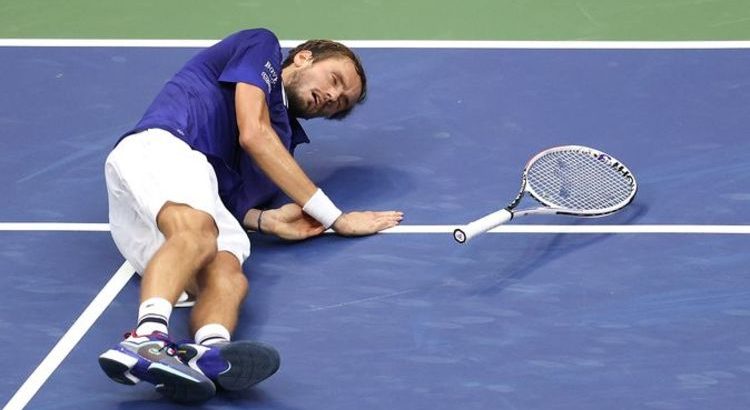 Daniil Medvedev became just the second male player born in the 1990s to win a Grand Slam title. The world No 2 overcame Novak Djokovic in straight sets, denying the 20-time Major champion the chance to achieve the calendar Grand Slam. After sealing victory in the US Open final, he dropped to the floor in a hilarious celebration, later revealing his inspiration during his winner’s speech.

The 25-year-old had come close to lifting the trophy at a Major twice before, having made his first Slam final in Flushing Meadows two years ago and coming from two-sets-down to force a decider against Rafael Nadal before ultimately suffering defeat.

He then faced Djokovic in the Australian Open final at the start of the year, with the world No 1 dispatching the Russian 7-5 6-2 6-2 to win his then-18th Grand Slam title.

The Serb was looking to rewrite history by becoming the first man in 52 years to complete the Calendar Grand Slam, and looked to pull ahead of Federer and Nadal by winning a record 21st Major title, with the pair all tied on 20.

Medvedev had previously been tipped as one of the favourites to stop Djokovic from becoming the first man since Rod Laver in 1969 to win all four Grand Slams in a single season.

The world No 1 had already captured titles at the Australian Open, Roland Garros and Wimbledon, and was looking to complete the set in New York.

The Russian cemented himself as one of the men to halt Djokovic in his quest for history, having won the Toronto Masters in the lead-up to the US Open, as well as only losing five matches on hard courts this season.

He appeared to be flying as he went 6-4 6-4 5-2 up and served for the title but blew a championship points as nerves got the better of him and he served a flurry of double faults.

Medvedev was able to close out the match at the second time of asking, and fell to the floor on his side as he celebrated winning his first-ever Grand Slam title.

The bizarre reaction had many comparing the 25-year-old to a flopping fish or a brick, but the new US Open champion then dropped a hint to explain his celebration during his speech.

As he finished congratulating Djokovic and thanking his team and the crowd, Medvedev dropped one final line that caused many to understand exactly what inspired his celebration.

“Only legends understand what I did after the match: L2 + Left,” he said, referencing a famous FIFA celebration.

People took to social media to share their delight at the second seed’s hilarious FIFA-inspired move.

“Daniil Medvedev made a Fifa joke at the end didn’t he?” one tweeted.

Another wrote: “Daniil Medvedev finishing his speech with the FIFA controls for his celebration on winning the #USOpen is absolutely the highlight of the night”.

The newly-crowd Grand Slam champion also used his speech to congratulate Djokovic and make a bold statement on the GOAT debate, before revealing it was his wedding anniversary and ending on a sweet message for his wife.