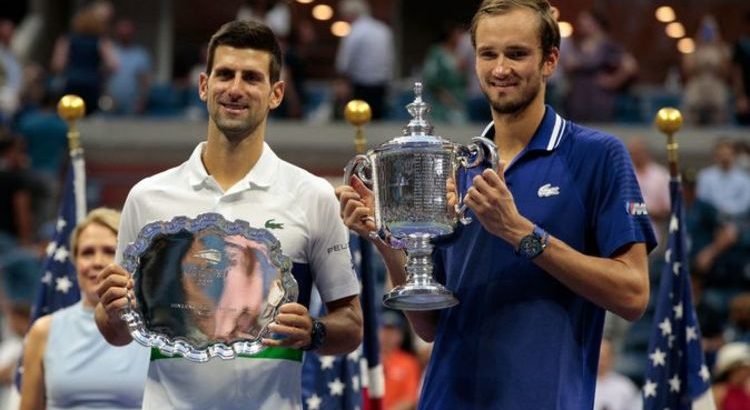 Daniil Medvedev denied Novak Djokovic the chance to make history as he won his maiden Grand Slam title at the US Open. The Serb was looking to be the first man to complete the calendar Grand Slam in 52 years, and the first male player ever to reach a record 21 Major titles. Having lost his previous two Slam finals, the world No 2 stepped up and delivered a confident performance to stop the top seed in his tracks, and admitted his 6-4 6-4 6-4 victory was even sweeter because Djokovic was his opponent.

Medvedev had been tipped as one of the players who could stop Djokovic in his tracks as he eyed history in New York.

A US Open title would have made the world No 1 the first man since Rod Laver in 1969 to win all four Majors in the same year, and allowed him to pull ahead of long-time rivals Roger Federer and Rafael Nadal with a record 21st Grand Slam title.

Instead, thanks to Medvedev, the Serb will remain level with his fellow Big Three members on 20 Slams, and will still be the player of the season having scooped the Australian Open, Roland Garros and Wimbledon.

The 25-year-old was the final player standing between Djokovic and the record books, and admitted that his triumph was even sweeter because it stopped history being rewritten.

JUST IN: Emma Raducanu’s US Open party went on ‘until 4.45am’

The world No 2 had fallen at the final hurdle twice before, coming from two sets down in his maiden Slam final against Nadal at the US Open two years ago before ultimately losing in five.

He then faced Djokovic in the Australian Open final at the beginning of the season, where the top seed scored a routine 7-5 6-2 6-2 win.

This time, it was the Russian’s turn to produce an emphatic display against the 34-year-old, needing just two hours and 15 minutes to win his first Grand Slam title 6-4 6-4 6-4.

Medvedev boomed huge serves past the world No 1 and dominated the longer rallies, while Djokovic appeared flat – likely hampered by the weight of the pressure on his shoulders.

It was the Russian who made his own history in Flushing Meadows, taking home a well-deserved first Grand Slam title, and celebrating with a hilarious FIFA-inspired ‘dead fish’ move on the court, before saying that only “legends” would understand his “L2 plus left” celebration.

Medvedev was not just happy about his first Major title though, as he later said the victory was made even better by the fact that he was able to become the man to end Djokovic’s incredible streak at the biggest tournaments in tennis.

“I do feel sorry for Novak because I cannot imagine what he feels. I don’t know this feeling. It definitely makes it sweeter,” he said after the match.

“I mean, a Grand Slam is a Grand Slam. I would win it against Botic in the final, probably I would be same happy.”

Medvedev, who dismissed Federer and Nadal to declare Djokovic the greatest player of all time during his victory, said he would take confidence going forward knowing he was the only man able to stop the world No 1.

He continued: “For the confidence and for my future career, knowing that I beat somebody who was 27-0 in a year in Grand Slams, I lost to him in Australia, he was going for huge history, and knowing that I managed to stop him it definitely makes it sweeter and brings me confidence for what is to come on hard courts so far, but let’s see about other surfaces.”

He was also asked about the ‘GOAT debate’ verdict given during his speech, saying: “Yeah, you know, I’m not going to repeat probably again. But, yeah, it’s there. It’s honest what I said.

“I feel like it can be even in a way a little bit disrespectful to some other guys, which we all know. That’s just I had him there behind me.

“Again, what I said is not like I would have another player behind me and beat him in the final, I would have not said it. So that’s what I think. And, yeah, that’s all I need to say.”
Source: Read Full Article