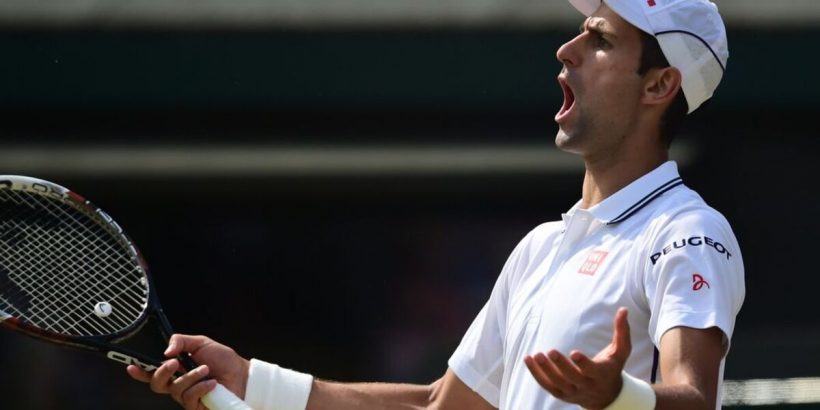 Novak Djokovic jokes about his age at the Australian Open

From being disqualified from the US Open to hurling his racket high into the crowd – there’s been no shortage of controversial moments in the stellar career of Novak Djokovic. The Serbian star is currently on track for a 10th Australian Open crown, following the explosive saga last year which saw him deported a home a day before the tournament began. But that was all off-court, and the 35-year-old has plenty of on-court flashpoints to reflect on as well  – and Express Sport recalls five of his most memorable outbursts.

Djokovic didn’t enjoy as much action in 2022, but it didn’t affect his passion when he did. Taking on Holger Rune at the Astana Open, the former world No 1 left frustration get the better of him after the Dane outfoxed him in one point, with a retreating Djokovic unable to reach his opponent’s cute drop shot before it bounced twice.

He duly responded by hurling his racket in the air, although fair to say it went further than intended and ended up high up in the stands. Immediately realising his mishap, Djokovic raised both hands in apology and smiled when he realised the item had been safely caught – heading to the crowd to have it handed back. It could have been a lot worse.

Djokovic disqualified from the US Open

Debate raged as to whether it was right to ban Djokovic from the Australian and US Open last year over his refusal to be vaccinated against Covid. Two years previously however, he was sent packing from Flushing Meadows without actually losing a game and it was his own fault entirely.

JUST IN: Andrey Rublev left red-faced in Aus Open blunder after ‘anyone but Djokovic’ comment

Visibly frustrated after being broken in the first set against Pablo Carreno Busta, he struck a ball away in anger. Whilst there wasn’t any intention to actually strike a lineswoman with it, that’s what happened and the official was left bent double, coughing and needing medical attention. Djokovic immediately acknowledged his error, but the damage, literally and metaphorically, was done.

A tantrum in Tokyo

Prior to the delayed 2020 Tokyo Olympics, Djokovic had three Grand Slams in the bag and all talk was dominated of hios potential ‘golden Slam’. But that all unravelled in Japan, and his behaviour in his bronze medal match defeat, again with Carreno Busta, left a lot to be desired. Djokovic lost his cool twice in the deciding set, throwing his racket into the empty stands and then smashing another into the net post shortly afterwards.

Not all Djokovic meltdowns come amid a defeat. At the Monte Carlo Masters in 2019, he reached boiling point after failing to put away German veteran Philipp Kohlschrieber quickly. Djokovic eventually prevailed, but only after one racket was smashed to bits on the clay and another ended up in the crowd.

The 2020 ATP Cup tie between Serbia and Canada had quite an atmosphere. But despite being in control, the excessive noise during rallies left Djokovic livid. He argued with the umpire after he wasn’t allowed to challenge a call, called out spectators, and hit a ball into the stadium roof. He won though.