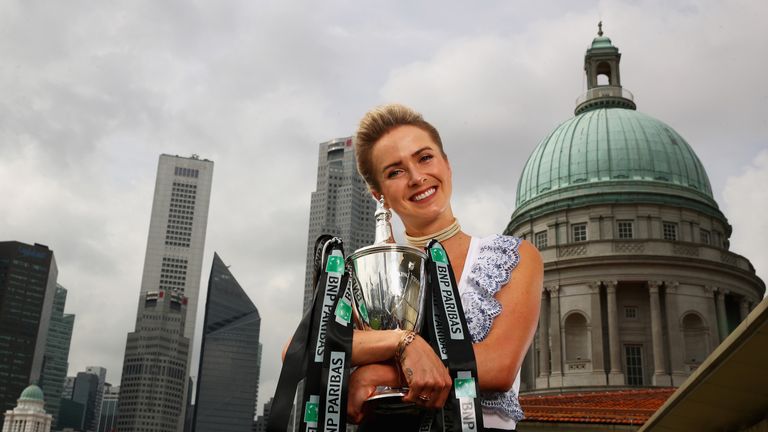 Elina Svitolina says she has “nothing to prove anymore” after she secured the biggest title of her career on Sunday to win the season-ending WTA Finals trophy to “silence the haters”.

Svitolina rallied to claim the WTA Finals title with a 3-6 6-2 6-2 victory over Sloane Stephens on Sunday to record the biggest win of her career.

The Ukrainian hopes her latest win will silence her critics after her form nosedived in the second half of the year.

Having sneaked into the eight-woman field courtesy of three early-season titles, the world No 7 sensed her presence had been regarded as undeserved in some quarters.

“I think I have nothing to prove anymore to anyone and it’s definitely a good statement for myself,” Svitolina said. “I think mental toughness is what I really had to show.

“I played great tennis and I worked my way into the tournament. It’s going to bring me lots of confidence.”

I am incredibly happy to end the season with a victory at @WTAFinalsSG ? Many thanks to those who trusted in me!?? pic.twitter.com/s0th1bMm6b

Svitolina became the eighth player to go undefeated in winning the season-ending title, which features a three-match round-robin format at the outset, and first since Serena Williams in 2013.

She has now won 13 of 15 finals she’s played in her career, including the last nine with her last final loss coming in 2016 to Petra Kvitova at the Zhuhai tournament.

“Of course I know that I’ve won lots of finals,” Svitolina said. “But for me every final is a big challenge. Not everything worked in the first set, but I fought back and that’s what brought me the win today. I’m very proud of this.”

Svitolina split with coach Thierry Ascione in October and worked with Andrew Bettles in Singapore but said she would look at her options during the off-season.

“I don’t want to take a person and then split in two weeks. So it’s a big decision,” she added.