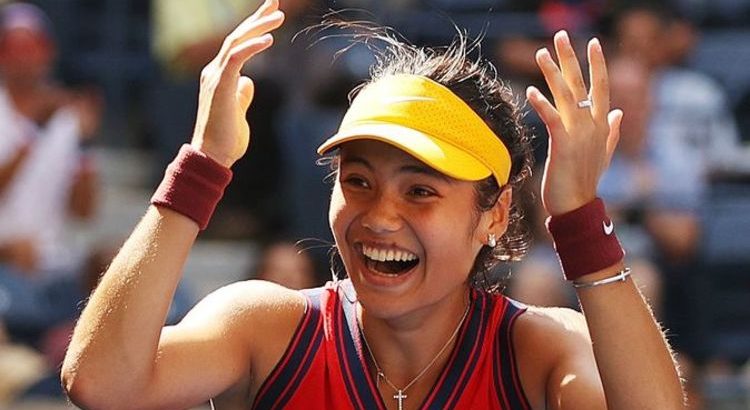 British tennis starlet Emma Raducanu has joined elite company in Maria Sharapova and Venus Williams after reaching the US Open semi-final as an 18-year-old.

Raducanu’s remarkable run extended following a 6-3 6-4 straight sets win in the quarter-finals over Switzerland’s Belinda Bencic, and in doing so became the youngest US Open semi-finalist since Sharapova in 2005, and the youngest on debut since Williams in 1997.

The 18-year-old provided yet another shock in New York, defeating world No 11 and Olympic champion Bencic in her toughest test yet for her fifth straight set victory, despite playing in her very first US Open.

The British sensation may be on debut, but she is proving to be one of the tournament’s hottest contenders, having not dropped a set and only conceded 22 games across her five matches so far.

Speaking after her record-breaking quarter-final win over the Olympic champion, Raducanu said: “I’m so, so happy to come through. Belinda she is such a great opponent and in good form, her ball speed caught me off guard so I had to adjust and adapt. I’m just taking care of what I can control and I’m on my own journey.”

JUST IN: Elated Emma Raducanu speaks out after reaching US Open semi-final with Belinda Bencic win

The youngster shot to fame this summer, following a remarkable Wimbledon performance that saw her reach the fourth round on her debut performance on the famous grass.

However, Raducanu was forced to cruely withdraw midway through her round four clash with Ajla Tomljanovic due to sustaining breathing difficulties in the second set.

Consequently, Britain’s new rising star has since put her Wimbledon woes behind her, and excelled whilst taking part in her next Grand Slam, and in doing so joined some of the game’s greatest ever players in the US Open history books.

And, the records do not stop there, as the straight-set win over her Swiss opponent on Wednesday evening ensured she became the first qualifier in US Open history to reach the semi finals of the tournament.

Her electric summer has seen her take a meteoric rise through the world rankings, and victory in her quarter-final clash means she is now guaranteed to be British No 1 on Monday.

As a result, the youngster will overtake Johanna Konta as Britain’s top seed, moving to world No 51, after beginning July’s event at Wimbledon in 338th.