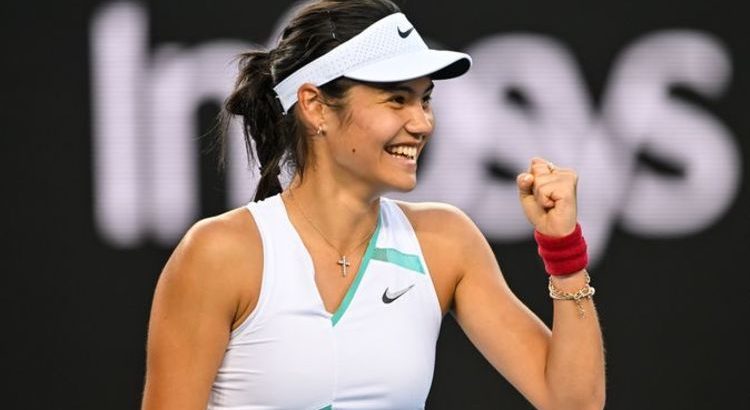 Emma Raducanu will reach a new career-high in the WTA rankings next Monday despite an early exit at the Australian Open. The 19-year-old made her debut in Melbourne last week but lost in the second round while suffering with severe blistering.

Raducanu started her first full season on the professional tennis tour in Australia this month.

The Bromley local stunned the sporting world when she became the first qualifier in history to win a Grand Slam at the US Open back in September, playing what was just the fourth pro tournament of her career while ranked down at world No 150.

The historic victory saw her skyrocket into the world’s top 25, earning her a place in even the biggest events on the WTA Tour, though she played just three more events before the 2021 season came to a close.

Raducanu then came into the very next Grand Slam, the Australian Open, as the 17th seed with direct entry after needing a wildcard for Wimbledon and qualifying for the US Open last year.

JUST IN: Kyrgios worries ‘tennis in trouble’ over Federer, Nadal and Djokovic

Although she was a top seed for the first time, the teenager faced a tough first round draw in fellow US Open champion and former world No 3 Sloane Stephens.

It was the Brit who won the battle of the Grand Slam champions, earning a 6-0 2-6 6-1 victory over Stephens to open her Australian Open debut.

But Raducanu’s run ended in round two when she suffered with blistering against Danka Kovinic and was barely able to hold the racket, serve or hit forehands.

But it isn’t all bad news for Raducanu, who failed to make it out of the first week of a Grand Slam for the first time.

Currently sitting at a career-high ranking of world No 18, the Brit will now surpass her record and edge closer to the top ten following her Aussie Open debut.

With the likes of defending champion Naomi Osaka seeing a large bulk of their points drop off next week for failing to make it as far in the draw this year, Raducanu now looks set to climb up to No 13 in the world, in the current live rankings.

All players get 10 ranking points for a first-round win at Major level and, despite being a small number, it will be enough to see the Bromley local rise five positions, helped by the early losses of fellow players ranked in a similar place.

And Raducanu will keep on rising, having only made her WTA Tour debut as a wildcard at the 250-point tournament in Birmingham last June where she lost in the first round, and winning her first ranking points from a tour-level event at Wimbledon.

Without any points to defend for the first half of the season, the 19-year-old can only build on her already-high ranking and will likely be knocking on the door of the top ten soon enough.

Speaking about her potential upcoming events after her loss to Kovinic, the world No 18 said: “There is not much time, but, I mean, there is some tournaments in Mexico or the Middle East, and it’s just a matter of that before Indian Wells.”

The WTA has two events in Mexico next month, running from February 21 at the Monterrey Open and Abierto Zapopan, and two in the Middle East, held in Dubai and Doha from February 14.

The Middle Eastern events offer 1000 and 500 points respectively, while Raducanu can also only gain at the WTA 1000 in Indian Wells after crashing out in the first round last year, when the tournament was postponed to October.

The WTA has two events in Mexico next month, running from February 21 at the Monterrey Open and Abierto Zapopan.