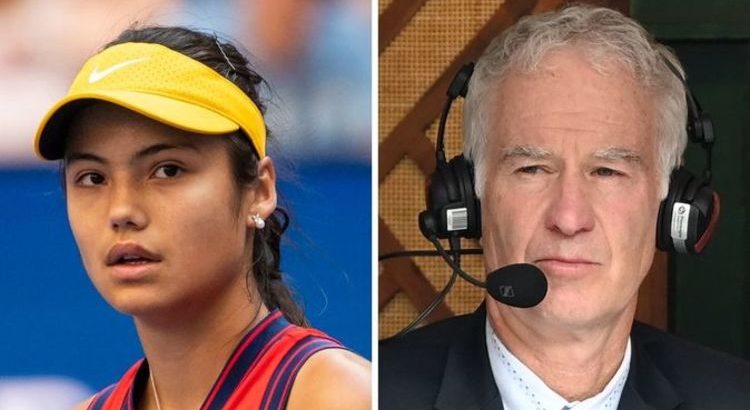 Raducanu has stunned fans with her performance in this year’s US Open, having not yet dropped a set in the tournament. Today, she faces Swiss player Belinda Bencic, a formidable opponent who won the Olympic title last month. Their match begins at 5pm GMT, but coverage starts on Amazon Prime at 3:30pm.

Raducanu has risen through the ranks of the tennis world having picked the game up as a youngster.

Earlier this year, she entered Wimbledon as an unknown wildcard, ranked 338 in the world with just one WTA Tour-ever match under her belt.

And despite being fresh from sitting her A-level exams, she made a dramatic first impression on the competition.

She beat Vitalia Diatchenko, French Open finalist Marketa Vondrousova and world number 45 Sorana Cirstea, quickly becoming one of the biggest stories and most talked about players.

It made her the youngest British woman to reach Wimbledon’s second week since 1959.

But her run came to an end in frustrating circumstances when she was forced to retire against the Australian Ajla Tomljanovic after suffering breathing difficulties.

This led to a brush with the media, and criticism from high-profile names.

McEnroe, commentating for the BBC during the match, suggested that Raducanu found playing in the last 16 of the tournament “a little too much” and could not handle the high pressure situation.

He said: “It appears it just got a little bit too much, as is understandable, particularly with what we’ve been talking about this over the last six weeks, with Naomi Osaka not even here.

“How much can players handle?

“It makes you look at the guys that have been around and the girls for so long – how well they can handle it. … We have to appreciate the players that are able to do it so well, and hopefully she’ll learn from this experience.”

While many received his comments as critical feedback, others said they were harsh and potentially damaging.

Tomljanovic hit out at the three-times men’s champion, and when asked about his comments, said: “I can’t imagine being in her shoes, at 18, playing a fourth round in your home country.

“It’s something I can’t even imagine.

“For him to say that, it’s definitely harsh.

“I have experienced something similar but not to that extent. I know that it’s a real thing.

“I’ve spoken to athletes that have gone through that. It’s not easy.”

Taking to social media, he wrote: “I didn’t realise John McEnroe was medically qualified or that he has X-ray vision!”

However, the tennis ace did caveat his comments, suggesting that Raducanu might benefit from having lost.

He said: “Maybe it’s not a shame this has happened right now when she is 18.

“I played this tournament at 18 and in a way I was happy I lost.

“I was able to understand what it would take to make it.”

Piers Morgan, the former Good Morning Britain presenter, agreed with McEnroe and said he believed his words were fair.

He tweeted: “McEnroe told the truth. Ms Raducanu’s a talented player but couldn’t handle the pressure & quit when she was losing badly.

“Not ‘brave’, just a shame. If I were her, I’d tell my fans to stop abusing McEnroe, & seek his advice on how to toughen up & become a champion like he was.”

But British tennis legend Andy Murray, who has trained with Raducanu, quickly came to her defence, and replied: “Think this is a very harsh take on the situation, Piers.

“I think some of what he said was fair yes…however the timing of it was a bit off considering nobody had any clue what her issue was injury/illness/breathings issues etc at the time of his comments.”