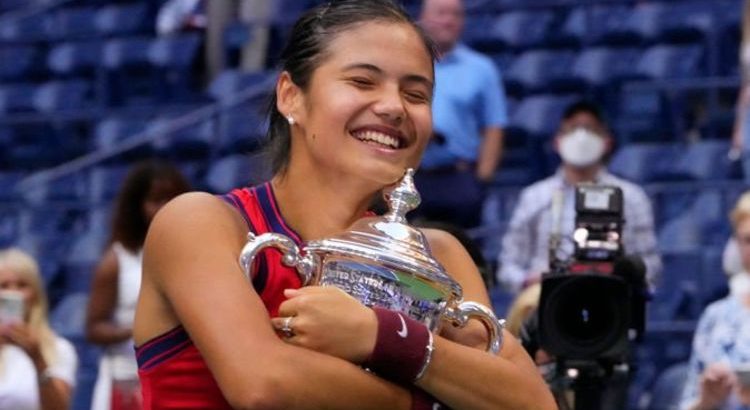 Emma Raducanu has been told she now has to look at her game and fix any weaknesses just like Roger Federer, Rafael Nadal and Novak Djokovic did following their first Grand Slam triumph. Raducanu beat Leylah Fernandez in the US Open final to win her first major tournament.

The 18-year-old become the first qualifier to ever win a Grand Slam event and she did it in some style, not dropping a set in any of her 10 matches.

Raducanu will rise to No 21 in the world when the latest rankings are released on Monday.

And Amazon Prime tennis pundit Daniela Hantuchova reckons the Brit has to copy Federer, Nadal and Djokovic if she wants to become world No 1.

“The most important thing is not to get satisfied and to always look for ways to improve,” Hantuchova said.

“That’s where Roger, Rafa and Novak have been so incredible over the last 15 or 20 years.

“Even after everything they have achieved if you look at their tennis now and it’s completely different to what it was in the beginning.

“Rafa with the serve, Roger coming in more, Novak getting even more physical.

“It is important now that she digests this, has one more round of huge celebrations and then get back to the practice courts and think ‘what do I have to do to get the next Slam and to get to No 1 in the world’.

“For me there is no question it’s where she should arrive.”

Raducanu collapsed to the ground in tears after her victory was secured.

And when speaking to her childhood hero Tim Henman, she gleamed: “It means everything to hold this trophy and I don’t want to let go right now!

“Yesterday there were weird feelings I couldn’t put my finger on, I think that’s just normal, when I came out it was business as usual, one point at a time.

“I had to fight hard for that first set and keep myself ahead in the second.

“In the key moments, I came out with some clutch serves and was changing direction as early as possible.”

A host of big names have sent messages of support to the teenager – and even the Queen sent her congratulations.

“I send my congratulations to you on your success in winning the United States Open Tennis Championships,” she wrote.

“It is a remarkable achievement at such a young age, and is testament to your hard work and dedication.

“I have no doubt your outstanding performance, and that of your opponent Leylah Fernandez, will inspire the next generation of tennis players. I send my warmest good wishes to you and your many supporters.”