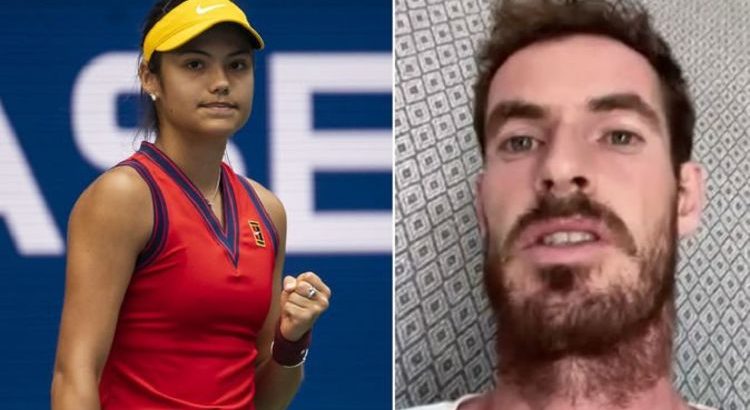 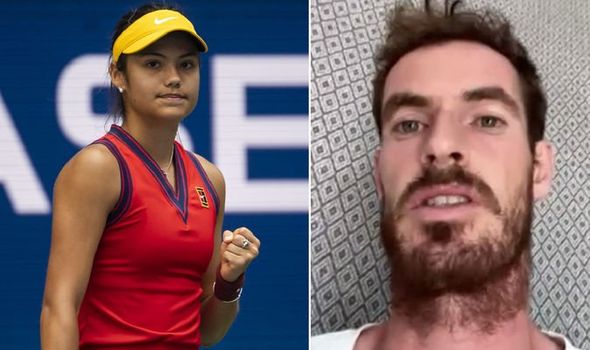 Andy Murray offered Emma Raducanu some career advice on Amazon Prime prior to her match with Belinda Bencic. Raducanu’s first ever Grand Slam quarter-final saw her get the better of her Swiss opponent 6-3, 6-4 on the US Open’s main court at Arthur Ashe Stadium.

The Briton had won seven matches without dropping a set to get to the last eight of the tournament and appeared to suffer from nerves at the start of the first set against 11th seed and Olympic gold medallist Bencic, who started strongly.

Yet the incredible Raducanu, competing only in her second ever Slam, held her nerve and rallied to clinch set one and again kept her composure in the second set as she powered through to the semi-finals to the delight of the American crowd.

Raducanu has still yet to drop a set at the US Open and also reached the fourth round at Wimbledon on her major debut in July before being forced to withdraw from the event while 6-4, 3-0 down to Ajla Tomljanovic due to breathing difficulties.

Still, having been an unknown before SW19, she emerged as the new darling of the nation by becoming the youngest British female to make it into the ­second week at Wimbledon since Christine Truman in 1959.

Since then, the Toronto-born teenager reached the final of the Oracle Challenger Series in Chicago but lost to Claura Tauson of Denmark and has now stormed through the field at Flushing Meadows to reach the final four aged just 18.

And before her phenomenal run continued into the semis thanks to victory over Bencic, three-time Grand Slam-winning countryman Murray was asked about her progress on Amazon Prime moments before her match got underway.

And the former world No 1 hailed Raducanu’s ‘very exciting’ rise and urged his fellow Brit to maintain her focus on honing her craft on the court as she looks to soar to the top of women’s tennis in the coming years.

“Nowadays it’s a little bit harder with social media and everything to avoid that [the press],” Murray said of the growing hype around Raducanu, ranked world No 150.

“I think everyone is obviously different, some people like having lots of press, some people like doing all the sponsorship things and the magazine shoots and all of those things that come off the back of being successful in tennis.

“I don’t know unfortunately what Emma’s like with that stuff and what motivates her but ultimately you want to keep the focus on the tennis as much as possible and try not to let all of the other things be a distraction.

“Some of them, if you enjoy doing them, I think that’s a positive thing and you want to have interests outside of the court but so long as you’re able to still focus on the tennis at the end of the day and your training and everything and it doesn’t get in the way of that.

“I’ve hit a few balls on the court with Emma and I’ve been around her a lot over the past couple of years in terms of seeing her training at the National Tennis Centre and stuff, because of coronavirus and everything a lot of players have been around there.

“Her attitude is fantastic. She trains hard and practices well. I’ve not heard anyone that’s worked with her or that’s around her have a bad word to say about here.

“She’s got a great attitude, she’s a smart girl and she’s doing extremely well. I’m sure she’ll continue on the right path.

“Let’s see what these next few days hold. It’s very exciting for everyone in British tennis.”

Raducanu will not have heard Murray’s latest words of wisdom given the interview was broadcast moments before she took to court.

But the very public support of the two-time Wimbledon winner has meant a lot to her, as she made clear earlier in the week.

Raducanu explained: “Andy is such an inspirational person to look up to. The amount that he’s achieved, the amount he can do with his racquet and skill.

“To have him like sometimes believe in me, support me, I think it means a lot to have had someone like that. Also today had Virginia Wade in the front row.

“I saw her, spoke to her a little bit after the match. It was just really cool to be able to speak to such legends, get their tips on a couple things.”