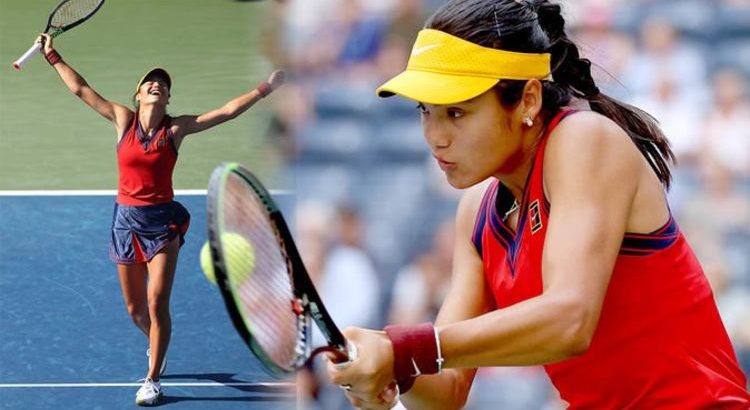 Only 18-years-old, Emma Raducanu from Bromley in South London will tonight face Canadian 19-year-old Leylah Fernandez in the US Open final. Emma’s teammate Heather Watson has revealed how super-strong Emma achieves feats in training that her male counterparts ‘couldn’t’.

Emma Raducanu shook up the tennis scene earlier this year when she stepped on to the court at Wimbledon.

Although Raducanu had to withdraw from the London event, she’s back on form for the 2021 US Open.

Competing in the final tonight has made teenager Raducanu the first British woman to reach a Grand Slam singles final in 34 years.

The last was Virginia Wade, when she won Wimbledon in 1977.

Emma’s power and prowess on the court has been attributed to her incredible discipline in training.

Standing at 5’8”, Raducanu is extremely strong and is a fan of sharing clips of her gruelling weight training and gym regime on Instagram.

According to her British teammate, Heather Watson, Emma hip-thrusts 200kg – something she says “most of the guys couldn’t do.”

Emma is used to being compared to the boys; speaking to British Vogue for their October edition she said: “The whole [tennis] squad I was in was all boys.

“It was quite intimidating in the beginning to, you know, get out of my shell and actually begin to really enjoy what I was doing because I was so scared. I’m not sure of what.”

Afterwards, Emma said: “The biggest learning was how physically behind I am.”

It seems a lot has changed since Wimbledon, in both Raducanu’s physical fitness and in her mindset.

Emma Raducanu has also changed coaches since Wimbledon, taking with her Andrew Richardson who worked with her at Bromley Tennis Centre six or seven years ago.

He joins her at the US Open alongside her physiotherapist Will Herbert and agent Chris Helliar.

Kate, Duchess of Cambridge, who loves tennis, has even given Raducanu the royal seal of approval, tweeting: “What an incredible achievement at this year’s #USOpen @EmmaRaducanu!”

Who is Emma Raducanu?

Emma Raducanu is an 18-year-old tennis player from Bromley in South London.

She was born in Toronto to a Romanian father, Ian, and a Chinese mother, Renee, but the family relocated to Britain when Emma was just two years old.

She attended Newstead Wood, an independent school in Orpington, Kent, where Olympic champion Dina Asher-Smith was also a student.

When she competed at Wimbledon in 2021 she was considered a ‘wildcard’ but this saw her star rising, as viewers became captivated by her performance.