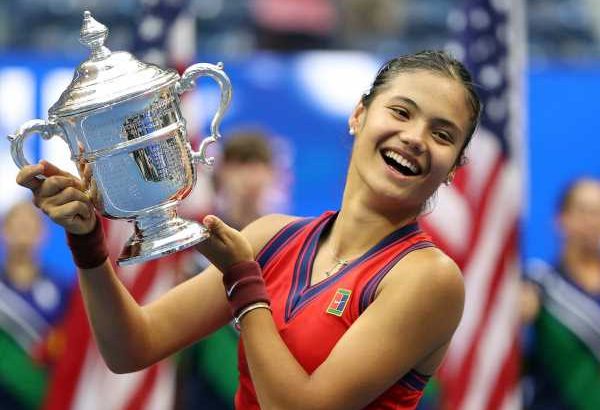 It was a fairytale, but it wasn’t a dream. For the past two nights in New York, Emma Raducanu had been falling asleep visualising the moment of winning the US Open, fantasising about the climb up to the players’ box and the feeling of dropping into the arms of her team in triumphant celebration. On Saturday night those visions became a reality, as the 18-year-old completed her unprecedented and sensational US Open run with a stunning win over Leylah Fernandez to cap off one of the most remarkable and unlikely victories in British sporting history.

In becoming the first qualifier to win a Grand Slam title and the first British woman to claim a major tennis singles prize since 1977, Raducanu has made a mockery of the history books with the relative ease with which she has advanced through her 10 matches at Flushing Meadows without dropping a set.

There were still plenty of moments of adversity, however, and Raducanu was made to experience them all in an enthralling match against Fernandez – none more so than in an excruciating final game in which she faced two break points and an enforced medical timeout before storming back to seal the championship with a thunderous ace out wide.

If the memories of the last British tennis player to win their first Grand Slam singles title were anything to go by, the price of success was supposed to be one paid in years of anguish, tears and defeat. In just her second Slam appearance, Raducanu has also made a joke of that notion, and nothing will ever be quite the same as it was.

Raducanu’s life is forever changed now. Two months ago, before Wimbledon, she was ranked No338 in the world and had a couple of thousand followers on Instagram. Now she is guaranteed to go up to world No23, after having already secured British No1, has picked up a winner’s cheque of £1.7million and her Instagram account has passed the one million followers mark.

In a matter of weeks she has gone from an unknown student in Bromley focused on sitting her A-Levels to the new face of women’s sport in the UK and, potentially, a global star. Marketing and PR experts have been tripping over themselves to predict that brands around the world will be queuing up to offer the 18-year-old a range of multi-million pound sponsorship deals, and parallels have already been drawn with Naomi Osaka due to their multi-market appeal.

Women’s tennis is in a completely different place now than it was three weeks ago. The emergence of two teenage stars in Raducanu and Fernandez onto the same stage at the same time is huge for the sport. For them to play a final of the highest quality and unparalleled tension is also hugely significant for women’s sport as a whole in the UK, as was the fact it aired in a primetime slot on free-to-air TV and captivated an audience that until now has not existed in tennis outside of the usual two weeks of Wimbledon. “I still haven’t checked my phone. I have no idea what’s going on outside of our little world that we’re in here,” Raducanu said, as she admitted she was not truly aware of the celebrity status that awaits the teenager upon her return home. “We’ve just been in the quiet room enjoying the moment and taking it all in. We just need to shut out from everything and just enjoy it as a team, because it was a team effort. I didn’t get here by myself at all.”

It is Raducanu’s close-knit team, comprised of coach Andrew Richardson, agent Chris Helliar and physio Will Herbert, that will prove vital in maintaining the environment that has allowed her to perform so spectacularly in New York over the weeks and months to come. Increased demands will be made of her, and that’s just off the tennis court.

On it, Raducanu’s opponents will attack the US Open champion with the vigour and fearlessness that defined her own run to the title. New players will break through, desperate for the scalp that Raducanu now represents. Former pros and pundits have declared that Raducanu will go on to become a multiple-time Grand Slam champion, if she stays fit. The expectation will only build from here.

If approached correctly, it’s a fun challenge to face. Raducanu’s attitude has served her well so far as the teenager has championed an elite mentality of taking one day at a time during her extended three-week stay at Flushing Meadows, even as the noise surrounding her rise built with each passing round. As for the talk of what changes now, to Raducanu it remains just that: noise.

“For me, I don’t feel any pressure. I’m still only 18 years old,” she said. “I’m just having a free swing at anything that comes my way and that’s how I faced every match here in the States. It got me this trophy so I don’t think I should change anything.

“I’m not even thinking about when I’m going home. I’m just trying to embrace the moment and take it all in and I think it’s definitely the time to just switch off from any future thoughts or plans. Right now I’ve got no care in the world. I’m just loving life.”