Former tennis star Jelena Dokic has called out the body shaming online abuse she has endured during the Australian Open, where she has been working as Channel Nine expert commentator.

Expressing her disgust with the nature of some comments made to her, the former Wimbledon semi-finalist said she would continue to use her public platform “for something good” and “try to make others feel less alone”. 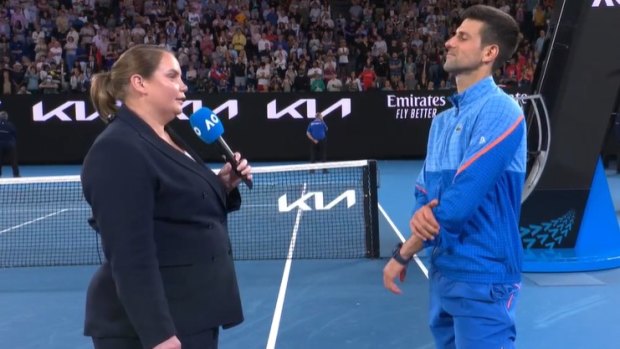 Dokic posted screenshots of comments about her weight she has received on her Instagram and Twitter social media accounts.

The 39-year-old said people should be ashamed and described one online interaction as “evil”.

“The most common comment being ‘what happened to her, she is so big’? I will tell you what happened, I am finding a way and surviving and fighting. And it really doesn’t matter what I am doing and what happened because size shouldn’t matter,” Dokic wrote.

“Kindness and being a good person matters which those of you that abuse me and others, are clearly not.”

Dokic said she was “still here fighting for all those out there being abused [and] fat shamed”.

“I can’t change the world but I am going to continue speaking up, calling this behaviour out, using my platform for something good and to support other people out there and to give others a voice and try to make others feel less alone.”

Dokic, who experienced extreme and emotional and physical abuse at the hands of her father, Damir Dokic, has increasingly been willing to speak about her mental health.

Dokic, a tennis prodigy who reached the No.4 world ranking, released a book in 2017 which detailed the relationship with her father.

In her book, Unbreakable, Dokic wrote about her extraordinary life experiences, in which she says she emerged as a survivor from years of abuse, including once being beaten so badly she was left unconscious, regular beatings with a leather belt, emotional manipulation, and vile verbal harassment.

In the book, Dokic said the decision to turn her back on Australia and play for Yugoslavia was the biggest regret of her life and her tennis career.

Dokic had numerous career highlights and returned to Australia the country and famously received enormous overwhelming public support when she reached the 2009 Australian Open quarter-finals.