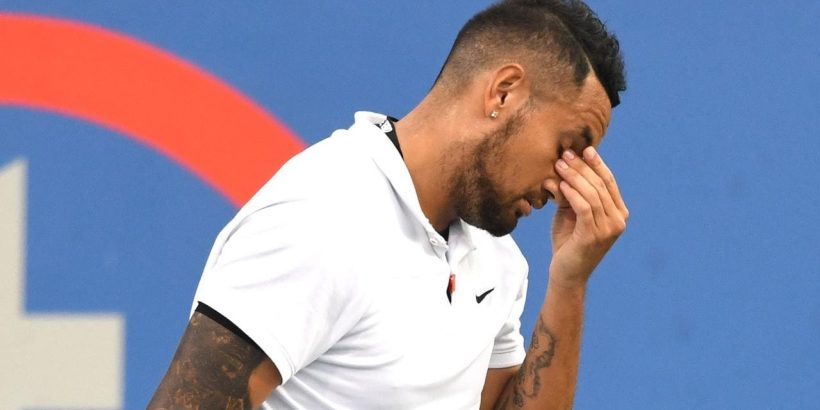 Nick Kyrgios’ title defence of the Citi Open was over before it even began, going down in straight sets to Mackenzie McDonald.

But it wasn’t McDonald’s 6-4, 6-4 scoreline leading the headlines of the match. Nor was it any of Kyrgios’ long list of on-court antics.

Rather, it was a heartbreaking and almost depressing admission in his post-match press conference that the 26-year-old had supposedly lost his competitive edge.

“I’m not feeling the severity of certain points, and I don’t feel the pressure as much as obviously playing week in, week out,” said Kyrgios.

“I don’t really feel like my body and my mind quite understand the severity of some points here or there because I haven’t played that much.

Kyrgios failed to defend his Citi Open crown after losing in the first round. Picture: Casey Sykes/Getty ImagesSource:Getty Images

“I know that I’m going to be dealing with a lot of sh-t now on social media. Like, my head’s in the shed, to be honest.

Kyrgios was seeking to defend his Citi Open crown he won in 2019, as last year’s edition of the tournament was cancelled due to Covid.

The Canberra-born star beat Stefanos Tsitsipas in the semi-finals and Daniil Medvedev in the final to win the tournament, but there would be no such repeat of a similar feat this year.

McDonald, hailing from the US and ranked 107th in the world, had yet to win a match in the main draw of a tournament since Roland Garros earlier this year.

Kyrgios will have the chance to rebound in the doubles with American Frances Tiafoe and believes he just has to keep hitting balls to try to get himself back into form.

“I know there are going to be a lot of people disappointed,” Kyrgios said..

“As I’ve said, I got doubles still this week. I’ll try and enjoy every bit of time I have on the court. I’ll get back on the practice court.

“All I can do is just keep trying to play, keep swinging and hopefully things will turn.

“The more tennis I play day in, day out, hopefully I’ll get some momentum, get back to some of the old tennis that I can play.

Kyrgios, who’s ranked at 77th in the world, has represented a much calmer figure on the court of late.

It’s a far cry from the days of smashing racquets, being accused of tanking, and copping a record ATP fine for his aggressive behaviour to a chair umpire.

But for Kyrgios, it may even be a case of rediscovering that bad-boy edge to light the competitive fire he seemingly needs.

“I feel like I actually enjoyed my tennis more when it was so up and down,” Kyrgios said.

“I actually miss the days when I was losing and carrying on and I was getting fined and I was throwing my racquets, I was carrying on.

“That just meant that I just cared a lot. Do you know what I mean? Like, I actually cared what was happening.

“I always had this theory when people got angry when they’re losing, really angry, that it was a sign that they cared. Do you know what I mean? Like it’s positive.

With the US Open kicking off at the end of August, it won’t be long before we find out what type of Nick Kyrgios will step on to the courts at Flushing Meadows.

His previous best performance in New York is the third round, but if his performance at the Citi Open is anything to go by, he’ll be fighting to advance past the first obstacle whoever that may be.