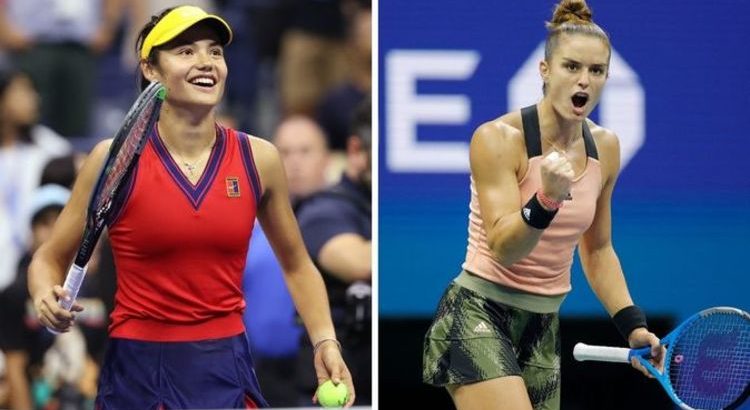 Maria Sakkari aimed a slight dig at Emma Raducanu following their US Open semi-final. The 18-year-old needed just 84 minutes to dispatch the 17th seed 6-1 6-4, though Sakkari later said she thought herself and Raducanu’s previous opponents hadn’t been at their best. The young British sensation has become the first-ever qualifier to make a Grand Slam final, and will face fellow teenger Leylah Annie Fernandez on Saturday.

Raducanu is yet to drop a set through three qualifying matches and six main-draw matches, looking dominant throughout her run to the final.

Among her victories, the Bromley teenager reeled off five successive wins over top 50 players and beat two seeds back-to-back.

JUST IN: Djokovic explains why he’s ‘had enough’ of calendar Grand Slam talk

The Greek was vying for her first-ever Grand Slam final birth herself, having held match points during her crushing defeat to Barbora Krejcikova in the Roland Garros semi-finals earlier this year.

Sakkari was disappointed to go down easily to her teenage opponent, and though she praised her game style after the match, she admitted that she believed Raducanu had faced opponents who weren’t at their best, perhaps helping her seal victory.

During her post-match press conference, the world No 18 was asked whether there was something about Raducanu’s game that left her challengers unable to perform at their highest level – but she claimed that herself, Bencic and Rogers didn’t play to their own standards.

“I mean I’ve played with players that, for example Kvitova, the ball comes extremely fast and you have no time to react.

“But as I said earlier, she plays fearless, she absolutely goes for it and she does the right thing actually.”

Although she praised Raducanu for her ability to continue playing without any pressure, she admitted that she thought herself and Bencic had given the 18-year-old an easy match.

The 26-year-old continued: “She goes for it, she has nothing to lose, she’s enjoying herself but you know, we were all absent from the court these days playing against her.

“I saw Belinda [Bencic] yesterday, I don’t want to speak for her but I think she would agree with me that we did not bring our best performance.”

Raducanu’s latest stunning victory over Sakkari came after 19-year-old Canadian Fernandez was able to grind out a three-set win over world No 2 Aryna Sabalenka and book her spot in a maiden Grand Slam final.

The Brit admitted she wasn’t thinking about the last-four contest before hers as she followed in Fernandez’s footsteps and ousted a seeded player to reach the final, saying in her on-court interview: “Honestly today I wasn’t thinking about anyone else except for myself. I just want to thank my team and the LTA for all of their support over the years. I wouldn’t be here without it.”