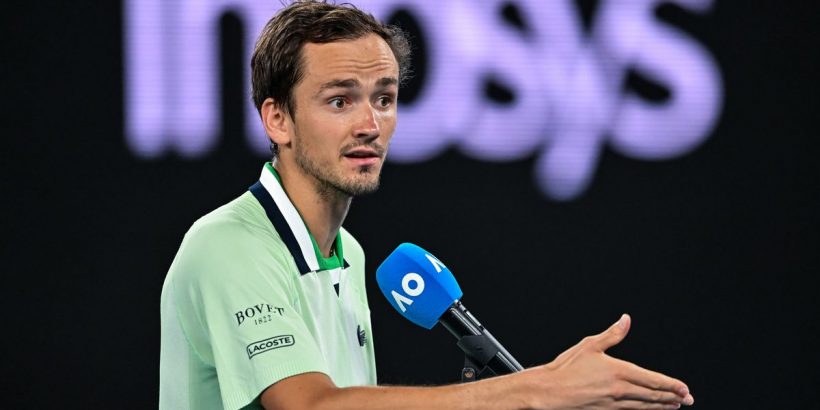 Cheers soon turned to jeers for Daniil Medvedev after his epic five-set win over Felix Auger-Aliassime at the Australian Open.

The Russian, who became favourite for the tournament following the deportation of Novak Djokovic, produced a remarkable fightback to prevail 6-7 (4-7) 3-6 7-6 (7-2) 7-5 6-4 in front of a raucous crowd at the Rod Laver Arena.

Medvedev is now just two wins away from a second Grand Slam title, having beaten Djokovic to claim the US Open last September, but his hopes hung in the balance after going two sets down to the Canadian.

A tight third set went Medvedev's way in the tie-break, which was stopped for six minutes with the score at 2-1 as the roof was closed with rain falling.

Auger-Aliassime, 21, did have a match point at 5-4 in the fourth set, but Medvedev responded with an ace under pressure before two more big firsts serves got him out of trouble.

He also had to survive three break points in the second game of the decider, before breaking for a 2-1 and after saving a further break point late on, closed out a memorable win after after four hours and 42 minutes on court – as the clock ticked past at 12:30am local time.

His win prompted big roars from the crowd inside the arena, only for his supporters to then turn on him when he referenced Djokovic during his post-match interview with Jim Courier.

Asked how he turned things around Medvedev, 25, said "I have no idea.

"I was not playing my best and Felix was playing unbelievable, serving unbelievable, I didn't really know what to do, so I don't know if people will like it but I told myself 'What would Novak do?'"

His comment was greeted with a chorus of boos, although they duly turned back to cheers when Medvedev rescued the situation by name-dropping two crowd favourites.

"Or Rafa [Nadal] or Roger [Federer] to be honest, they won so many matches like this. So I thought 'OK, I am going to make him work, fight to the last point'."

The win has set-up a semi final clash with Greece's Stefanos Tsitsipas, and despite the effort exerted against Auger-Aliassime, issued a clear warning to his rival.

Before leaving court, Medevedev took a marker pen and wrote “I’m not tired,” on a camera lens.

His clash with Tsitsipas takes place on Friday.