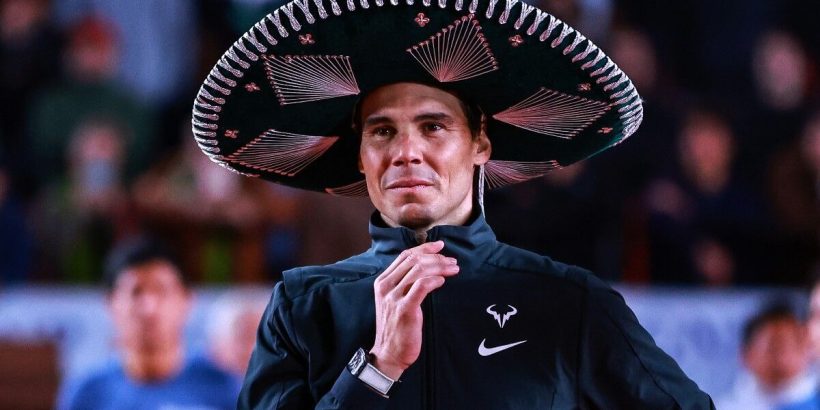 Nadal has a chance encounter with Serena Williams in June

Rafael Nadal has claimed he feels at home while in Mexico as part of his South American exhibition tour. The Spaniard travelled to several countries around the continent to contest some light-hearted matches with Casper Ruud.

The pair visited Argentina, Chile, Brazil, Ecuador and Colombia before concluding the tour in Mexico. After defeating the Norwegian 7-6, 6-4 at the Plaza de Toros in the last match of their tour, the 36-year-old commented on the welcome he receives each time he visits.

“And well, in all the places I have been in the country in Cozumel, Tulum, Playa Mujeres, and Acapulco, I have always been happy. I have always taken good memories of the places, but also of the people, of the food, of everything, and that always encourages me to come back.”

The world number two has enjoyed plenty of success in Mexico, winning the Acapulco Open four times, and is currently its reigning champion. He has thrilled the Mexican fans with his supreme ability over the years, but the 22-time grand slam champion claimed he may not play there again, having confirmed he will not defend his title in 2023.

“It will most likely be the last time I play in Mexico, Acapulco 2023 is not on my calendar and the 2024 season seems far away,” he explained. “Now is the time to enjoy this moment to the fullest and play in an emblematic setting, with many people and in a country where I have always felt loved.”

However, Nadal did not suggest he would be retiring, but between the lines he may be reducing his activities as he gets closer to the end of his career to maintain his fitness, with injury problems blighting recent seasons. “For me the main thing right now is to be able to get to the important tournaments in full physical condition,” he added.

“I continue to enjoy day-by-day and I continue to have goals that excite me at a professional level. I’m going to try to achieve them until my body or mind says enough.

“At the moment, that hasn’t happened so I want to continue. I am happy doing what I do, I love competing on the big stages and the love of the people encouraged me to continue.”

Nadal is set to commence his 2023 season when he leads Spain in the inaugural United Cup, an annual mixed team event set to be played in Brisbane, Perth and Sydney from December 29 to January 8 next year.