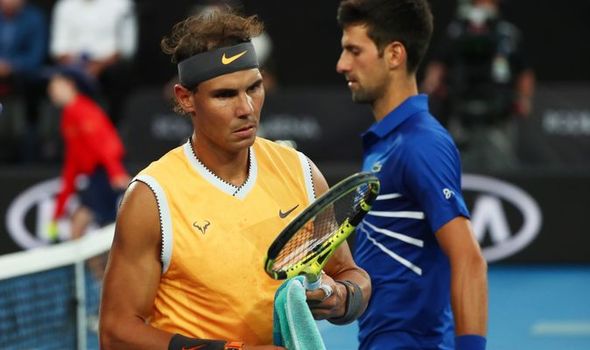 Rafael Nadal and Novak Djokovic will continue their longstanding rivalry when they meet in the French Open final today. No two men have played each other more often at tour level and this latest clash could one of the most significant in their careers. Not only are the players competing for the Roland Garros title, they also chasing Grand Slam history.

Nadal is bidding for a record-extending 13th French Open crown and a victory would see him match Roger Federer’s tally of 20 majors.

A win for Djokovic would see him move to within one of Nadal and two behind Federer.

Here, Express Sport takes a look at the head-to-head rivalry between the two stars.

Who has won the most matches?

This will be the 56th career meeting between Nadal and Djokovic.

And it’s the Serbian who has the advantage in the head-to-head rivalry, winning 29 matches to Nadal’s 26.

But when it comes to clay tennis, the Spaniard has triumphed in six of their seven meetings at the French Open, including the 2012 and 2014 finals.

Djokovic, though, can take comfort from the fact that he won their most recent encounter on this surface.

Their most recent Roland Garros encounter, though, was won by Djokovic when he beat his rival in the 2015 quarter-finals.

“I’ve played [Rafa] more than I [have] played any other player in my professional career,” said Djokovic.

“The amount of matches we played is almost 60 matches… He’s definitely my greatest rival.”

Nadal said: ”[He] is one of the toughest opponents possible.

“But I am here to keep trying my best. I like to play in this scenario. I know I have to make a step forward. I think I did one [on Friday]. But for Sunday [it] is not enough.

“I need to make another one. That’s what I’m looking for. I [am] going to work hard to try to make that happen.”

Conditions have often played a key role in the outcome of Djokovic and Nadal’s clashes.

The Serbian has dominated his rival on hard courts, winning all of their past nine meetings on the surface in straight sets.

“We all know that the conditions and the circumstances are obviously different from what we are used to,” said Djokovic.

“It’s going to be interesting to see how his game and my game match up, how it all plays out on Sunday.

“Depending on what the temperature is as well. That affects a lot the court, whether it’s heavy, not bouncing much, slippery, windy.

“All these things can affect I think both of us mentally and our games.”