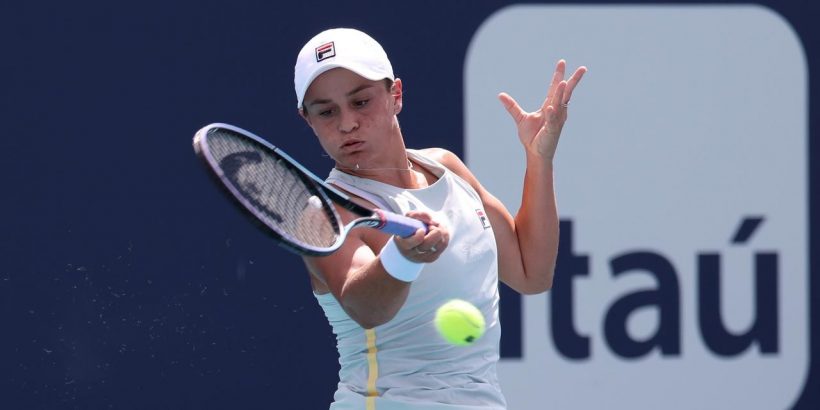 Ash Barty has survived a major scare in her first match since the Australian summer, narrowly avoiding a third consecutive defeat that would have seen her hold on the world number one loosen drastically.

There was high drama in the Aussie star’s round of 64 match against world number 149 Kristina Kucova at the Miami Open as she fought back for a 6-3 4-6 7-5 victory.

Barty, who is defending 1000 world ranking points at the event after winning it when it was last held in 2019, trailed 5-2 in the third set before launching an inspirational comeback.

She staved off a match point with a forehand return winner in the ninth game to pull it back on serve before breaking again to go ahead 6-5.

There was a late scare as Barty fell behind 15-40 while serving for the match but she reeled off the next four points to claim the win.

RELATED: Ash Barty is a false world number one

Still, it’s a slightly concerning performance against Kucova, who has never been ranked higher than 71 in the world and was knocked out in the first round of qualifying for this year’s Australian Open.

It comes after Barty’s disappointing quarterfinal exit at Melbourne Park in February was followed by a straight sets defeat against Danielle Collins at the Adelaide International.

Observers noted Barty’s “level was veering all over the place” and the match “wasn’t pretty”. The 24-year-old meets world number 54 Jelena Ostapenko in the round of 32.

While many top players, including men’s number one Novak Djokovic and Aussie star Nick Kyrgios, opted to skip the Miami event because of America’s ongoing COVID issues, Barty opted to take the plunge because of the points she was defending.

“You weigh up the risk v reward, (and) what you’re willing to accept,” she said, ahead of the tournament.

“I feel like now we’re in a comfortable position knowing that the tour’s doing the right thing.

“We’re going to be in a safe environment.”

That risk has paid off now for now, but Barty will be scrambling to find better form ahead of the year’s next major — the French Open where she is also defending the 2000 points she secured by winning her first grand slam back in 2019.