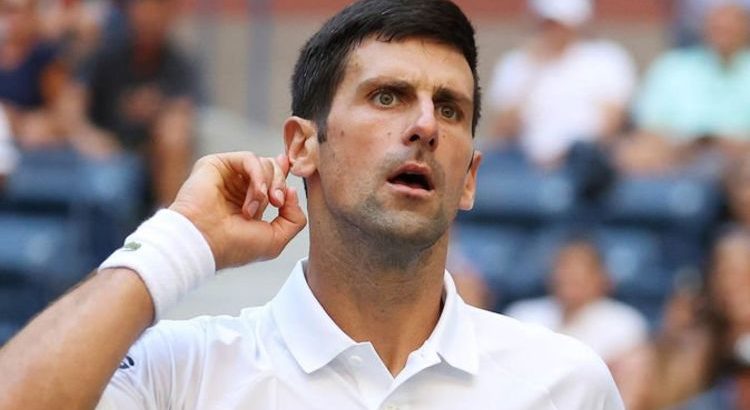 Novak Djokovic has explained why his wife, Jelena, was wearing a wolf t-shirt during his US Open clash with Kei Nishikori on Saturday night. The Serb went into the game with triumphs over Holger Rune and Tallon Griekspoor under his belt. And he battled his way to the fourth round of the competition with a hard-fought victory at Flushing Meadows.

Djokovic lost the first set to Nishikori, a player he’s lost to just twice throughout his career.

During the contest, wife Jelena could be seen wearing a t-shirt with a wolf on the front.

And Djokovic, speaking after his triumph, elaborated on her decision to sport the attire.

“She runs with the wolf,” he said.

“It can be very stressful to run with the wolf, and she doesn’t enjoy it at all times.

“It’s kind of living on the edge running with the wolf. But I love her, and she’s given great support.”

Djokovic was unhappy with his early form against Nishikori, admitting he was ‘quite passive’ when the match got underway.

“I don’t think I started off very well but he surprised me with his level today,” Djokovic said.

“It took me a little bit of time to adjust to his game. I was quite passive.

“I was too far back in the court. He was dictating the play. I was still trying to find the rhythm, find the tempo.

“Obviously he played much quicker and more aggressive than my opponents in the opening rounds did.”

On potentially winning a fourth Grand Slam of the year, and completing the Calendar Slam, he then said: “After I won in Paris this year, I felt like, ‘OK, I like my chances on grass, I won two Wimbledons in a row, I’ve improved over the years on grass – it did not seem impossible anymore to go for all four in a row in the same year,” he said.

“So here I am. I’m in a good position to do that. Still in the tournament.

“But I’ve got to take one match at a time.

“Probably the greatest Grand Slam career satisfaction I had is when I won four in a row back in 2016 when I crowned it with the first Roland Garros trophy.

“Even though I grew up playing on clay, I feel like Roland Garros has always been probably the Mount Everest for me. Out of all four Slams, that was the toughest for me to win.

“Both 2016 and this year’s win on French Open feel kind of similar. I felt if I win Roland Garros in that year, I have a good chance to maybe do it all in same year, Calendar Slam.”

Meanwhile, speaking recently to Express Sport, Greg Rusedski expressed a belief Djokovic would break new ground if he wins the US Open.

“Rod Laver was last to do it in 1969 before the Open era and also when Rod did it, three of the surfaces were grass and one was clay.

“So for him [Djokovic] to do it in the same year is extraordinary – plus he breaks the record of most slams in the men’s game and then he goes to his favourite Grand Slam in Australia so he could go five or even six in a row.

“This is going to be the most pressure he’s ever had in his career coming in. This is huge expectation pressure, also he lost in the Olympics to Zverev and he has some belief and Medvedev has some belief.