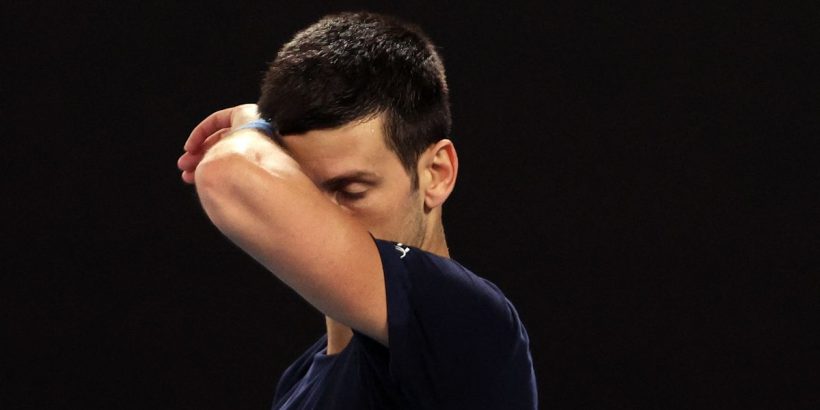 The world No.1 must now decide whether to appeal the decision after Hawke decided it was in the public interest to have Djokovic booted out of the country.

Djokovic was successful in his initial appeal against deportation, but Hawke has exercised his right to overrule the court.

It comes just days before the Australian Open is due to start, where Djokovic was set to bid for a history-making 21st Grand Slam title.

Follow all the latest updates from Australia as they happen right here.

Djokovic set to be detained

The full story as Novak Djokovic looks set to be taken back into detention by Australian authorities, ahead of a potential court date on Sunday to appeal his visa being cancelled for the second time.

Stephen Lloyd, for the Australian government, suggested two Australian Border Force officials should be on the same floor as the tennis star while he is with his lawyers tomorrow.

Djokovic would then be taken back into detention once he had finished assisting with his lawyers with the case, at midday.

He would then be taken back to the lawyers' officers for the hearing if it takes place on Sunday.

Lloyd said the government "has come a long way to give [Djokovic's lawyer] what he wants".

Judge Kelly is now doing a bit of housekeeping in terms of going over what 'fully vaccinated' means in the eyes of the law.

He says the general rule of thumb is for someone to have had their jabs, with the only exception to that being an official medical exemption.

Judge Kelly said: "If there was an exception, and if he had an Australian Travel Declaration which had been assessed and given the green light, that part of the case, I think, remains unresolved.

"I just wonder whether this is effectively an important foundational aspect of this case."

Stephen Lloyd, for the government, argues that this is a new case and that issues from the previous case filed last weekend are not relevant.

Stephen Lloyd, acting on behalf of the Australian government, has suggested that Djokovic keep access to his lawyers even if detained.

Djokovic is due to be interviewed at 8am tomorrow local time, after which he could be held at the immigration offices.

Nick Wood, Djokovic's lawyer, described the tennis star as a "high-profile" character of good standing who is of "negligible risk" to the wider Australian population.

Minister’s decision ‘could rile up anti-vaxxers’

Djokovic's lawyers have suggested that the decision to cancel the tennis star's visa could cause Australia's anti-vax community to react angrily.

Nick Wood told the court Alex Hawke had considered "inciting anti-vax sentiment" as one of the reasons why he chose not to allow the Serbian to stay.

But he went on to argue that the immigration ministed did not consider the effect that forcing Djokovic to leave might have on that same community.

Hawke criticised over timing of decision

Australia's immigration minister has been criticised by Djokovic's lawyers for announcing the decision shorlty after 6pm local time on a Friday.

Nick Wood, for Djokovic, wants the case to be dealt with as soon as possible, with one eye on the Australian Open which is set to get under way next week.

"We are where we are because of the time the minister has taken. We are moving as fast as we can," he told the court.

Wood explicitly said he wants proceedings to be resolved in time for Djokovic to be able to play on Monday night if he is needed to.

The stream of proceedings seems to be struggling under the amount of interest in the case.

Around 50,000 people are currently watching live on the Federal Circuit and Family Court of Australia's YouTube channel, which has likely never had such interest before.

No proposal to detain Djokovic – lawyer

Nick Wood says he does not expect his client to be detained tonight, and that he will be able to stay in his own accommodation rather than returning to a detention hotel.

Wood also asked Judge Kelly to make an order that Djokovic is allowed to be with his lawyers tomorrow so he can take part in the case.

He went on to suggest it would be "absurd" for the tennis star to be allowed to stay in his own accommodation tonight, only for that to change on Sunday night.

Djokovic is due to be interviewed at 8am tomorrow.

No suggestion of bias, says defence

Djokovic's lawyers really do not want this case to go in front of a Federal judge, as had been suggested at the beginning of this hearing.

Nick Wood, for Djokovic, says they have logged on tonight prepared and ready to roll, and suggested that thy do not believe there would be any suggestion of bias on Judge Kelly's behalf, as the judge has already ruled once in the tennis star's favour.

‘Every minute is precious’

Nick Wood, for Djokovic, believes his legal team can file a formal appeal against the cancellation of the visa by 10.15pm local time today. It is currently 9.15pm in Melbourne.

Judge Kelly said those timings would come as a "great relief" to him, as he had initially suggested that it would come on Saturday.

Wood went on to say that "every minute is precious" for Djokovic, who still hopes to play at the Australian Open. The event begins on Monday.

It appears this might rumble on into the weekend, as a brief injunction is suggested by the judge.

He suggests waiting until 4pm on Saturday (local time), as Djokovic has been "invited to an interview".

Case could go before a Federal judge

Judge Kelly suggests that the case might end up going to the Federal Court before this whole saga is over.

It appears this session might simply be a preliminary hearing before the actual main event.

Kelly said: "While I have what it seems is an unappealable power to transfer this matter to another court, it is qualified by the requirement … that the Federal Court of Australia confirms the order I make."

The hearing has begun

Judge Anthony Kelly is now addressing the court, explaining what has happened to this point and why everyone is there.

According to tennis reporter Ben Rothenberg, Djokovic's case looks set to be going back to court.

Judge Anthony Kelly, who heard the initial appeal and ruled in Djokovic's favour on that occasion, is set to preside over the case again.

But this time the legal bar that must be cleared for the cancellation of the tennis star's visa is much higher, making his lawyers' hopes of success far smaller.

Proceedings are set to be live streamed for fans to watch HERE.

A chance for Rafa?

Djokovic's now expected absence from the Australian Open leaves the door open for Rafael Nadal to grab another major title in the coming weeks.

The Spaniard is tied with Djokovic and Roger Federer on 20 Grand Slam successes each, but is now likely to be the only one of the trio in with the chance of the title in Melbourne.

Statistically, though, this is his least favourite of the four major tournaments, having only won it once 12 years ago.

And Nadal has been handed a tricky draw which means he is likely to have to beat four of the top 10 players in the world if he is to be successful in Melbourne – something he has never done before in a Grand Slam.

Perhaps we will see a new face lifting the trophy in a couple of weeks' time? Or can Nadal make history en route to eclipsing Djokovic and Federer's major title totals?

Here's the wording of the Australian immigration minister's statement as he confirmed the news.

"Today I exercised my power under section 133C (3) of the Migration Act to cancel the visa held by Mr Novak Djokovic on health and good order grounds, on the basis that it was in the public interest to do so.

"This decision followed orders by the Federal Circuit and Family Court on 10 January 2022, quashing a prior cancellation decision on procedural fairness grounds.

"In making this decision, I carefully considered information provided to me by the Department of Home Affairs, the Australian Border Force and Mr Djokovic.

"The Morrison Government is firmly committed to protecting Australia’s borders, particularly in relation to the Covid-19 pandemic.

"I thank the officers of the Department of Home Affairs and the Australian Border Force who work every day to serve Australia’s interests in increasingly challenging operational environments."

Something Alex Hawke's statement didn't mention is the three-year travel ban which usually comes with the cancellation of a visa in cases like this one.

The minister has the power to waive that period, but there is no sign at present that he is willing to do so.

That means Djokovic is not only facing not being able to play in this year's Australian Open, but he might have to miss out on the January Grand Slam for several years.

Novak Djokovic has been kicked out of the Australian Open after his visa was cancelled for a second time.

The decision was said to be in the "public interest", according to Immigration Minister Alex Hawke.

The decision comes after several remarkable days of uncertainty over his participation in the event, all caused by his refusal to get vaccinated against Covid-19.

Just days before the Australian Open begins, Hawke confirmed he had cancelled the Serbian's visa, effectively handing him a deportation notice.

Djokovic had intended to play in the tournament and defend his title after entering Australia using a medical exemption.

That medical exemption stemmed around a positive Covid-19 test on December 16, which would have allowed him to bypass the country's strict restrictions.

His exemption request had been approved by the Victoria state government and Tennis Australia, which seemed to give him legal permission to travel to Australia.

But upon his arrival, Australian Border Force rejected the exemption and canceled his visa. He spent four nights in hotel detention before a judge overturned the decision on Monday morning.