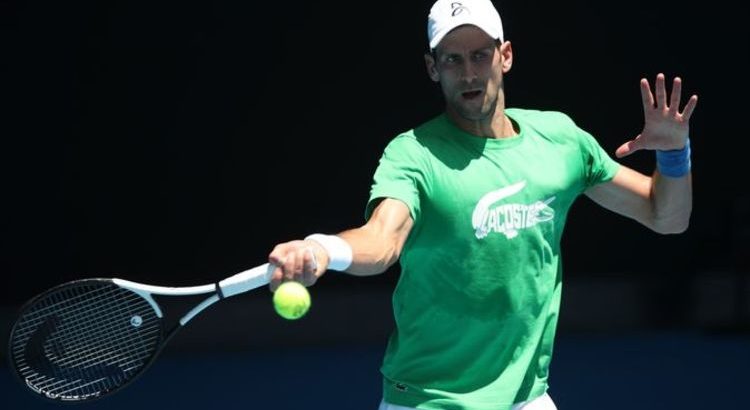 Novak Djokovic has learned his possible route to the final at the upcoming Australian Open, despite still facing the possibility of being deported. The world No 1 had his visa cancelled when arriving in Melbourne last week but won an appeal to have the decision overturned on the grounds of procedural fairness on Monday. Immigration Minister Alex Hawke is still considering whether to revoke the Serb’s visa for a second time but if Djokovic is able to play the Australian Open, he will be in contention for a record 21st Grand Slam singles title.

Djokovic had been in doubt for the Australian Open after it was announced that all players needed to be fully vaccinated, but last Tuesday he said he was flying to Melbourne after receiving “an exemption permission”, with Tennis Australia later confirming they had granted the Serb a medical exemption.

The world No 1 then had his visa cancelled at the border as he failed to provide border officials and the Victorian government with more than “minimal” proof of his exemption, only having evidence from one doctor.

He appealed the decision and won his case on Monday after the federal government conceded they had not used procedural fairness when revoking Djokovic’s visa as they failed to give him enough time to contact Tennis Australia or gather more evidence.

But the nine-time Australian Open champion could still be deported, as Immigration Minister Alex Hawke has the power to cancel his visa for a second time.

Mr Hawke was expected to make his decision on Wednesday but a spokesperson for his office said Djokovic’s lawyers had submitted additional documents which dragged out the process.

The Immigration Minister was then expected to announce the outcome on Thursday before the Australian Open draw was made but the delayed draw went ahead after he failed to make an announcement, and it was later confirmed a decision would be coming on Friday.

It means the world No 1 is currently in the Australian Open draw as the top seed, where he will be looking to become the first player to capture ten titles in Melbourne, as well as the first male player in history to win a 21st Grand Slam singles title.

Djokovic, who has won the last three editions of the Australian Open, is set to start his campaign for history against compatriot Miomir Kecmanovic.

Based on ranking, he would be expected to face young American prospect and world No 41 Tommy Paul in the second round.

It could be a revenge match for Italian world No 27 Lorenzo Sonego, who pushed Djokovic in a lengthy three-set battle in the Rome Masters semi-finals last year, in the third round.

Make it to the second week and, based on ranking, the nine-time Aussie Open champion ould be expected to face either five-time ATP title winner Christian Garin or French showman Gael Monfils – a match Djokovic would be the heavy favourite in as he leads their head to head 17 wins to 0 losses.

Matteo Berrettini looks set to await the world No 1 in the quarter-final, but the likes of young Spaniard Carlos Alcaraz or British No 1 Cameron Norrie have also been drawn in Djokovic’s quarter and could face him in a last-eight clash.

Having been drawn in the same half as his long-time rival Rafael Nadal, who is making his return from a left foot injury that forced him to end his 2021 season early, Djokovic could face his fellow 20-time Major champion in the semi-final.

Alexander Zverev is another potential semi-final opponent, and the world No 3 will be vying to defeat Djokovic at Grand Slam level after overcoming the 34-year-old at both the Tokyo Olympics and ATP Finals last year, before going on to win both prestigious titles.

But if Djokovic can overcome his last-four opponent and make a 10th Australian Open final appearance, it will likely be second seed Daniil Medvedev facing him for the title.

The world No 1 will relish the opportunity to get revenge over the Russian after losing his chance to complete the Calendar Grand Slam last year when Medvedev defeated him in straight sets in the US Open final.

But the world No 2 will also take a potential final clash as a grudge match – having lost last year’s Australian Open final to Djokovic.

Stefanos Tsitsipas would be another potential final opponent, and himself would want to get revenge over Djokovic after going two-sets-up on the Serb in last year’s French Open final before losing in five.