Novak Djokovic has pleaded with his fans to stop the abuse of line judge Laura Clark. The world No 1 was sensationally kicked out of the US Open on Sunday night after accidentally hitting Clark with a ball after striking it in frustration. Djokovic himself apologised for his actions – but Clark, who was hit in the throat by the ball, has been receiving abusive messages on social media from the Serb’s fans.

One posted on Clark’s Instagram site: “Shame on you. Old lady full of evil,” while other users accused her of faking the injury and “bad acting”.

But Djokovic asked fans to lay off Clark, issuing a message saying: “Please also remember the linesperson that was hit by the ball last night needs our community’s support too.

“She’s done nothing wrong at all. I ask you to stay especially supportive and caring to her during this time.”

Meanwhile, the US Open women’s draw is rapidly turning into the battle of the mums. 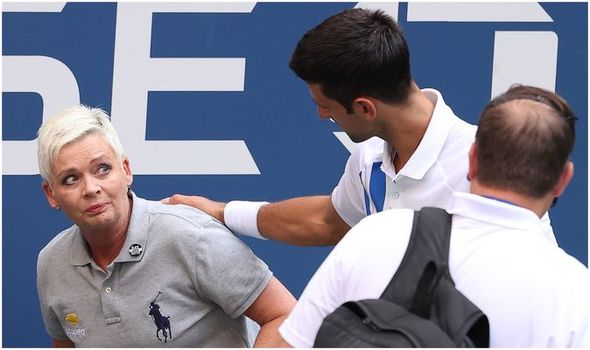 On Wednesday, Serena Williams will take on Tsvetana Pironkova in the contest of two mums to make the semi-finals, and the winner could find themselves taking on Victoria Azarenka – another parent.

Williams, now 38, endured a gruelling battle to get past Greece’s Maria Sakkari 6-3, 6-7, 6-3 on Monday, and is bidding for her seventh title at Flushing Meadows – and 24th Grand Slam. Watching will be three-year-old daughter Olympia.

Serena said: “I’m happy that there are so many moms in the event, obviously, because I’m one. I have a totally new respect for moms.”

Bulgarian Pironkova, 32, collapsed in tears after winning her quarter final against Alize Cornet 6-4, 6-7, 6-3 – in her first tournament in three years since giving birth to her son Alexander.

Alexander is back home with dad Mihail Mirchez, and an emotional Pironkova said: “I haven’t seen him in two weeks. It gets tougher every day.

“I know he’s watching and I know he’s proud of me. It’s worth it. It’s unreal. Mothering has helped me. You become a different person. I’m a lot more organised, I have more mental endurance. Serena – she’s obviously a legend.”

Former world No 1 Azarenka, who faces Elize Mertens, gave birth to son Leo in 2016 but after splitting with father Billy McKeague has been embroiled in a custody battle. The 31-year-old said: “I don’t think my son understands I’m in the quarterfinals. It feels amazing I can share this moment, and hopefully be a good role model to him.”

There were actually nine mothers in the draw at the start of the tournament, but the trio are now left bidding to become the fourth in the open era to win a major as a mum, after Margaret Court, Evonne Goolagong and Kim Clijsters.